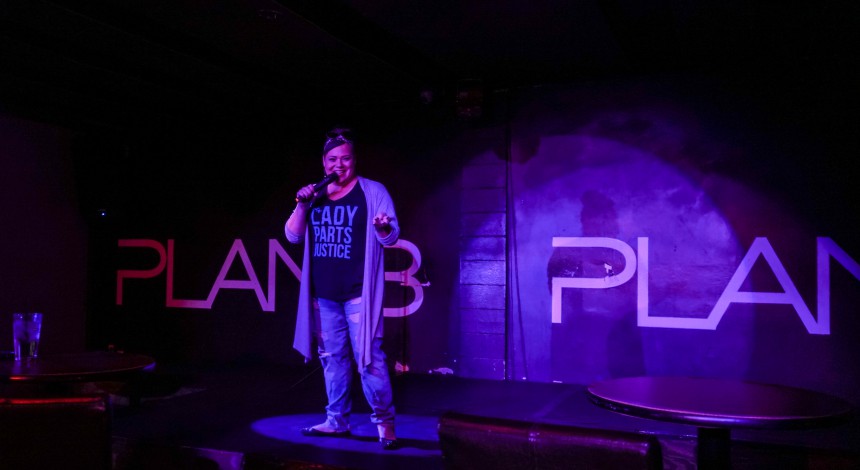 While the LGBTQ community and its allies are serious in their pursuits for equality, understanding and acceptance, that doesn’t mean they aren’t funny along the way, too.

Alphabet Soup is a LGBTQ-oriented comedy group that performs monthly at Plan B in hopes of creating a safe space for comedians and audiences alike. The shows’ aim is to make the audience feel accepted and, of course, make people laugh.

In the past, leaders in the gay community like parody-musician Johnny McGovern and RuPaul’s Drag Race-alum Kelly Mantle have performed and brought their own brand of humor to Madison.

The heart and soul of the show, however, remains with the local talent consistently bringing laughs. The founder of Alphabet Soup, Dina Nina Martinez, has become one of its staple comedians.

Martinez acquired a vast-array of stories through a career in Los Angeles and life as a transgender woman. Starting off as a showgirl, Martinez wanted to pursue something more creatively challenging. After a three-minute set at an open-mic comedy night, she was hooked and there was no stopping her. Martinez’s life in Los Angeles and transition to Madison have added poise and humor to her growing repertoire.

“My stories change,” Martinez said. “They kind of evolve. [My acts] started out being more campy and it turned out being more sassy through me telling my story. I feel like it’s also becoming increasingly more activistic … I’m definitely talking about the transgender community and the experiences that we have.”

When Martinez moved from California to Madison about three years ago, she had a goal in mind: creating a safe space for the LGBTQ community.

Comedy is an especially critical place where members of the LGBTQ community can find themselves the punchline of someone’s joke, but not in a good way. Alphabet Soup wants to end the negative attitudes and allow people to gain confidence.

“It’s especially hard for our community,” Martinez said. “I know people are afraid to go to the comedy club because they’re afraid they’ll get singled out or made fun of. This is a place where people can come and be like, ‘Hey, I can be me.’”

Martinez told stories of her struggles growing up being transgender and the worst issue of all — being a heterosexual woman with a dick. Niburger brought her awkward charm through tales of hiking stoners who don’t really hike, and the pros of having a twin size bed with no one to share it with.

Yops gave deadpan humor a unique perspective, focusing on the various names for her vagina fat from “FUPA” (fat upper pussy area) to “gunt” (gut cunt). Anna finished the show with her self-deprecating act. She discussed being a stripper, a smart slut and a movie about her life, “How To Lose a Day in 10 Guys.”

Regardless of gender, sexual orientation or taste in comedy, Alphabet Soup is sure to make audiences feel welcome, replacing cruel punchlines for honest, gut-wrenching comedy.