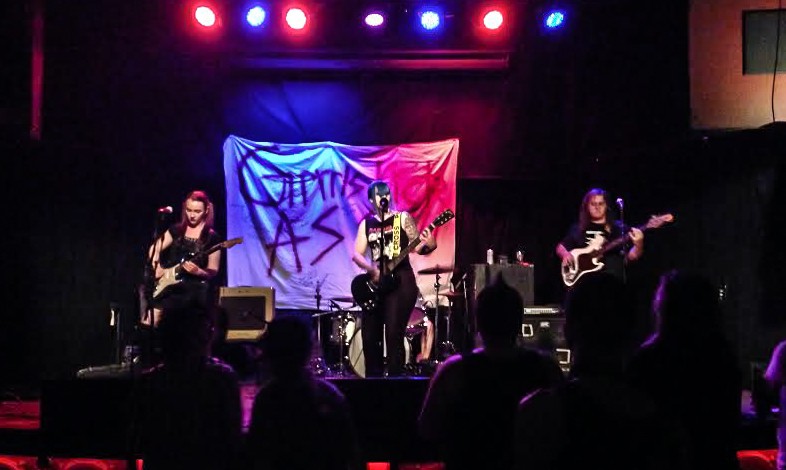 Local musician Meghan Rose is punk rock. She dons the messy hair, the badass tattoos and the iconic black eye liner. She has the confidence and the charisma of a rock star. More importantly, she has the ability to shred the shit out of a guitar.

But Rose isn’t alone in her hearty reincarnation of punk rock in Madison.

Alongside a handful of bands like the Skizzwhores and Sexy Ester, Rose has built an empowered punk rock scene in Madison — and it’s growing.

These local groups are setting the stage for a new generation of Kathleen Hannas and Carrie Brownsteins to take Madison by the throat and show everyone that not only is punk rock alive, but it’s also dominated by kick-ass ladies.

The third annual GRRRLS Kick Ass Fest, organized annually by musician Dave Bronson, exemplified this female empowerment through music at the High Noon on September 4th. The event takes inspiration from the Riot GRRRL feminist movement of the 90s, and its spotlight on female expression through punk rock music.

The bands all have their own unique flare, but they clearly take cues from the likes of Sleater Kinney, Bikini Kill and the many other women who paved the way in rock music a few decades ago.

The festival felt like a walk through a time machine into a Nirvana music video. Under clouds of nicotine and marijuana, a sea of people — in all black, of course — thrashed violently to the hard guitar riffs and guttural vocals of the sirens on stage.

The festival felt authentic and well-executed, but still possessed the spontaneity and crazy antics of a basement rock show.

Rose and her band The Bones passionately emanated these vibes, while determined to keep pushing riot grrrl in Madison.

“If I’m doing my job right, the audience should feel empowered,” Rose said. “I want to bring intensity and make people cry or make them shiver.”

That intensity and power was in full swing during her performance of “Spare Time.” A 7-minute break up song could have easily bored the audience, but Rose made sure they were invested in every minute.

The crowd was captivated as she riffed on her guitar and poured her heart into the microphone. It was the embodiment of what punk rock should be: songs brimming with raw emotion surrounded by killer musical production.

But, concerts aren’t the only way Rose and company hope to instill punk rock fever. They help empower a new generation of girls in Madison through projects like the annual Girls Rock Camp.

The camp, which started around seven years, is three different weeks during summer.

“We teach kids ages eight to 18, even if they’ve never picked up an instrument before, how to play the guitar, how to play bass, how to play drums,” Rose said. “They write a song in a week and they perform it. It’s really, really empowering for young girls.”

The camp also hopes to give young girls a skill they can take outside of music: fearlessness.

“When I first started, I was afraid to look at people,” Rose said. “I would do most of my stuff with my eyes closed. Now, everything I do onstage is a choice. I’m not nervous on stage at all. I’m not scared of anything. ”

That’s what the GRRRLS Kick Ass Fest and Girls Rock Camp is about. Not being scared. Not being apologetic. It’s about fearless women taking the stage and claiming it as their own.

These events may seem different, but they are united in showing Madison that girls can, and will, rock.