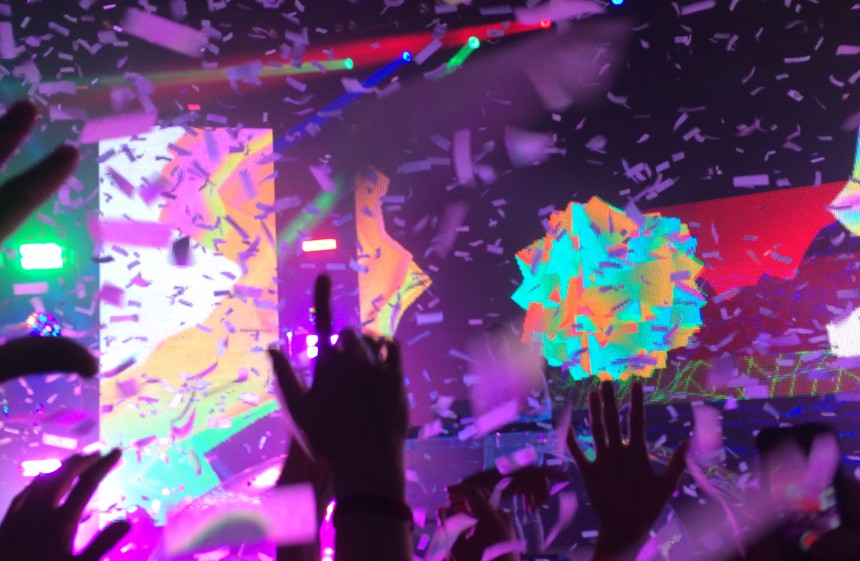 Just three days after Porter Robinson stopped his show on the University of Illinois’ campus to call out a few bros for “moshing too hard,” the 22-year-old producer brought his Worlds tour to Madison Saturday night. Apparently, Robinson had no issue with the rowdy Orpheum Theater crowd though, as he put on a remarkable EDM performance that lasted nearly two hours without interruption.

Robinson’s debut album, Worlds, released in August, was certainly a reinvention of the progressive-house sound he became so popular with. Worlds traded heavy electro synths and hard-hitting drumbeats for drawn-out, orchestral anthems. However, Robinson didn’t completely abandon his old style. Many of his new songs still contain female choruses with pseudo-meaningful lyrics often heard in electronic songs. All this combined for an entertaining, and at points overwhelming, live show.

Both of the opening acts weren’t particularly memorable. Lemaitre, a Norwegian indie electronic band, lacked the energy and stage presence that you’d expect from a group in that genre. The second act, Giraffage, focused much of his set on crowd pleasers, like the slowed-down rendition of Miley Cyrus’s “Party in the USA” that was not really necessary. It wasn’t until about midnight that Porter Robinson finally emerged and got his set started.

The Worlds tour had plenty of over-the-top production that we’ve come to expect at EDM shows. A massive LED screen reached both ends of the stage; smoke machines periodically blasted jets of white smoke and confetti cannons effectively turned the Orpheum into one gigantic snow globe in five-minute intervals. Good production can make or break a show, and at times some of it seemed to detract from Robinson’s music.

Robinson’s evolution of musical style has provided him with an arsenal of wide-ranging tracks to perform. For this reason, his live set didn’t always have a consistent theme. Heavier electro-house songs would suddenly give way to the lengthy anthems that Robinson favors, like his original track “Sea of Voices.” The enormous LED screen did have certain advantages, as Robinson used it to display the lyrics to choruses of his songs. This was probably relieving to many of the concert-goers who were otherwise tentatively singing the select few words they actually knew.

Robinson’s set list varied with both new and old songs. He played several remixes, including one of his tracks “Easy” and plenty of tunes off his new album, as well. The crowd stayed involved the entire time, jumping, sometimes shoving, but mostly dancing. Overall, it was a fun performance, but Robinson definitely should keep the old mantra “less is more” in mind.