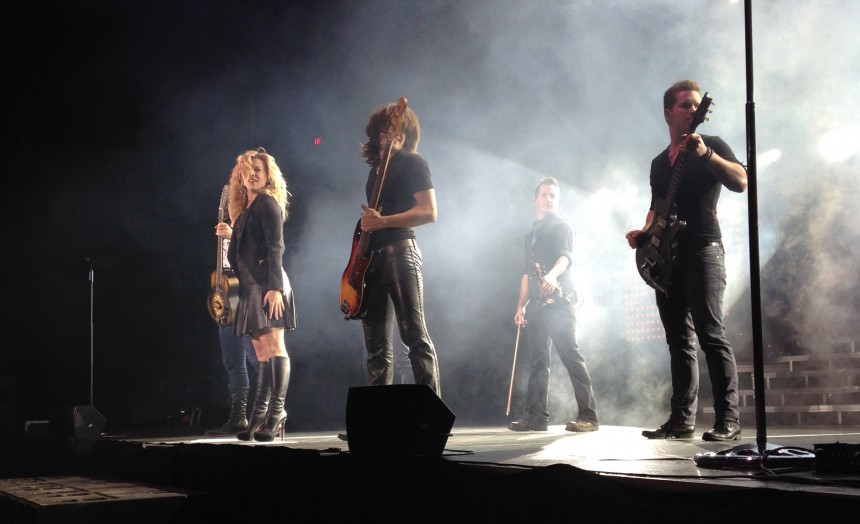 Energetic performers, talented musicians and catchy country melodies. All of these elements were present last Friday night during the Power2Save benefit concert at the Alliant Energy Center in Madison, headlined by country stars The Band Perry.

Although The Band Perry was the main event of the evening, the opening acts were nothing to scoff at by any means. Openers Joel Crouse and Scott MacIntyre were exceptional performers, and they set a positive and energetic tone for the remainder of the concert.

Joel Crouse started the evening off with a bang. Right from the start, he had the audience bopping around to his upbeat and catchy songs. Crouse’s charismatic attitude was contagious and complemented his captivating stage presence. As the set continued, Crouse transitioned from his song “Ruby Puts Her Red Dress On” into the popular Fleetwood Mac song “Dreams.” This sparked the crowd’s interest even more and helped him reach the older members of the audience. To close, Crouse sang “If You Want Some,” during which a sea of screaming girls was allowed near the stage, in order to experience the finale up close and personal.

Scott MacIntyre, a season eight finalist from “American Idol,” was the second act of the Power2Save concert. MacIntyre has been blind since birth, but that hasn’t stopped him from becoming a very talented musician. He told a compelling story about the importance of being an organ donor. In 2007, MacIntyre suffered from kidney failure. He was on dialysis three to four days a week. At one point, MacIntyre said he was so sick he could not sing, nor could he perform or travel. But later that year, his former piano instructor’s wife donated her kidney to MacIntyre, ultimately saving his life.

This transplant gave MacIntyre the ability to marry his wife, Christina, and to audition for “American Idol.” As he sang his famous song “I Am Hope”—which is dedicated to members of the transplant community—the crowd fell silent to admire this man’s astonishing story and words of hope. But the benefit did not end here.

The Band Perry came out sizzling with “Done,” a well-known song off of its newest album, Pioneer. This got the audience on its feet from the first chord onward. The band was very interactive with the crowd, always accepting high fives and asking everyone to wave their hands in the air.

With her sweet southern vocals on the band’s original songs to her cover of Whitney Houston’s “I Will Always Love You”, lead singer Kimberly was on fire. It was tremendously entertaining to watch this young lady strut her stuff around the stage in high-heeled boots—successfully, one might add.

While their older sister killed it on vocals, brothers Neil and Reid tore it up on guitar and banjo. The country rock style of the songs was heightened by the back-up guitarists (one of whom was a University of Wisconsin graduate), the drummer and a fiddler. What would an awesome country performance be without a fiddler?

The band was called back on for an encore and performed a new rendition of their hit song “Better Dig Two,” mashing it up with Fall Out Boy’s popular tune “I Know What You Did In The Dark.” It was a perfect way to go out with a bang.

Friday night was an applause-worthy evening for more than just the performances. The Power2Save initiative was supported by the proceeds of this concert. The money obtained through the event went to medical research and transplant enhancement. All three of these acts stepped up for a night filled with feel-good, enthusiastic music while successfully bringing more awareness to a worthy cause. Well done.