Here’s something the Wisconsin Foundation and Alumni Association (WFAA) won’t tell you when you donate to your alma mater — UW is strategically profiting off the destruction of our planet and its people. As of 2018, UW invested $124,785,961 in the fossil fuel industry through the WFAA.

Someone may ask, “Why is nobody talking about this?” The answer is simple — we are and have been for nearly 10 years. The WFAA has failed to listen and what’s more is the WFAA is failing to do their job.

The WFAA is a private nonprofit charged with investing alumni donations to maximize returns for UW. These returns are then used to fund university operations, rendering UW complicit in environmental injustice. According to their website, the WFAA “exists to promote the welfare of and advance the objectives of the university.” But their unwavering commitment to sponsoring climate change suggests they are falling short on both counts.

First, is the WFAA maximizing their returns? After all, this is the excuse they have most consistently relied upon when confronted with the ethicality of their investments. In 2015, the WFAA had $106,699,435 in alumni donations invested in oil and gas. Only two years later they lost $10,642,235 from their fossil fuel investments alone, which is over 10% of their investment value when adjusted for inflation. This may seem like the result of a temporary dip in the market, but it is a signal of something much darker — the fossil fuel industry in its death knell phase.

In the last five years, renewables have yielded a 65.6% return on investments compared to losses of -9.6% for the fossil fuel industry. Experts also argue no more than one-fifth of current fossil fuel reserves can be burned to prevent global temperatures from rising above 2 degrees Celsius. This means if global leaders follow through on their promises to dramatically curb carbon emissions, existing investments in fossil fuels will be virtually worthless.

Oil and gas producers have already lost $400 billion in market value over the last four years, a number that will only increase with global efforts to decarbonize by 2050 and changes in market norms driven by political stigmatization. If the WFAA had divested from fossil fuels and reinvested in renewable energy in 2015, as students demanded, their energy portfolio could have yielded $69,994,829 in returns over the next five years, leaving UW with an energy portfolio worth around $176,694,264 today rather than $124,785,961 — its most recently disclosed value in 2018.

The WFAA is neglecting their fiduciary duty to alumni donors by investing in one of the market’s most volatile industries, which hit 58.5% volatility in the last year alone. The WFAA claims “Endowed funds are invested in a broad range of assets with the goal to achieve the best-expected return for a given risk tolerance.” It appears their risk tolerance is astronomical given the high volatility, low returns and doomed future of fossil fuels.

In decades past, many investors within the WFAA enjoyed great business because of the reliability and profitability of oil and gas stocks. A current member of their Board of Directors even provides legal counsel for the second-largest utility company in the United States and one which has donated $1 million to America First Policies, a racist, Islamophobic, antisemitic and pro-Trump advocacy group.

It appears rather than maximizing returns, the WFAA continues to pour alumni donations into a dying and destructive industry. So what about their other goal —promoting the welfare and advancing the objectives of UW?

In its mission statement, UW pledges to “provide a learning environment in which faculty, staff and students can discover, examine critically, preserve and transmit the knowledge, wisdom and values that will help ensure the survival of this and future generations and improve the quality of life for all.”

In 2019, Chancellor Rebecca Blank even admitted, “We are facing a global crisis and we recognize that higher education has a major role to play in addressing it.” There is an intolerable contradiction between the university’s mission and the profits it reaps through WFAA, which threaten the future of not only today’s students, but life on this planet. By funding an industry which has led mass disinformation campaigns about climate change and lobbied against climate action, the WFAA is undermining the university’s sustainability efforts. 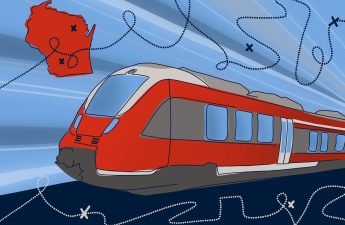 Proposed Amtrak expansions outline path towards U.S.-based sustainable transportation networkMarch 31, Amtrak proposed expansions to their current rail grid in a “Connect US” plan that would use the $80 Read…

If the WFAA truly wanted to support the university, they would listen to the students, alumni and community members who have continuously pushed for divestment for nearly a decade.

In 2013, the Graduate Worker Union called on UW-Madison to divest. In 2014, UW-Madison’s Ad Hoc Committee on Fossil Fuel Use and Climate Change issued a report promoting reinvestment. In 2017 and in 2020, the Associated Students of Madison adopted resolutions calling for UW-Madison to divest from fossil fuels. Just this semester, the UW Faculty Senate voted overwhelmingly in favor of a divestment resolution.

Nearly 190 educational institutions have already fully or partially divested from fossil fuels. Rather than leading the fight against climate change, UW is clinging to an antiquated investment model and funding the expansion of the very industry which causes it.

Letter to the Editor: UW Saving the Planet? Not yetThe UW System schools seem to take pride in their commitment to sustainability and the well-being of their students, all Read…

If you’re reading this, there is one thing you can do which will surely force them to listen — do not donate to UW until they have divested from fossil fuels.

No one is denying divestment is a lengthy, costly and difficult process, but mitigating and adapting to climate change is lengthier, costlier and more difficult.

The Wisconsin Student Climate Action Coalition is a student-led organization. More information can be found on WSCAC’s Facebook, Instagram, Twitter and Linktree. Join their weekly meetings Mondays at 7 p.m. here.