Super Tuesday wrapped up with results few could have expected. Due to former Vice President Joe Biden’s landslide victory in South Carolina three days prior, the field has shifted to compensate for a second superpower. Former South Bend Mayor Pete Buttigieg and Sen. Amy Klobuchar (D-Mn) both suspended their campaigns and endorsed Biden by mid-Monday, boosting his support among moderate voters.

Tuesday night when the first few states — North Carolina, Virginia and Alabama — reported a Biden victory surprisingly early by a surprisingly wide margin. Most surprising was the state of Virginia. Not only did they produce the largest increase in voter turnout — up 69% from 2016 primaries — but their preferences shifted at the very last minute.

Data for Progress conducted back-to-back polls of Virginia prior to Super Tuesday. The first was a week beforehand, which showed Sen. Bernie Sanders (I-Vt) nine points ahead of Biden. The second, a few days before, showed Biden ahead by fifteen points. Biden ended up beating Sanders by a little over thirty points in that state. Biden took nine of fourteen states Tuesday, earning a victory in Texas — one of the most delegate-heavy states — and solidifying his role as a competitor for the nomination.

Another surprise, though somewhat less salient and appreciated to many, was former New York City Mayor Michael Bloomberg’s single victory in American Samoa, where Tulsi Gabbard of Hawaii received her only delegate. He had bet his candidacy to take off on Super Tuesday alone, it being the first primary election that he participated in. Within twelve hours he suspended his campaign and endorsed Biden. 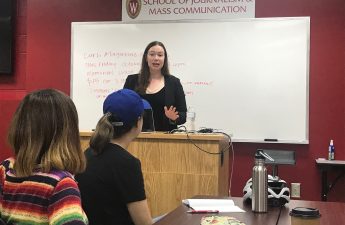 Biden has advantage of familiarity, Warren has disadvantage as woman in 2020, political writer saysFiveThirtyEight writer Clare Malone discussed the electability of the 2020 presidential candidates Tuesday. Democratic voters want a candidate who can Read…

And then there were three.

Sen. Elizabeth Warren (D-Ma) came in third on her own turf and remained in her unbreakable state of unpopular continuity. Even after several very strong debate performances, no lack of funding and no huge compelling reason not to support her, the only thing she proves not to have a plan for is how to win. Warren supporters are increasingly disheartened by her lack of support, which seems to be largely attributed to the fact that she is a woman.

Though the majority of delegates are left in the primary race still, she is showing no clear path to the nomination. It was reported recently that she is assessing her campaign as of Wednesday, bringing with it the expectation that she is soon going to make a big decision. Many are calling Warren selfish for not dropping sooner and accrediting the absence of a Super Tuesday victory by Sanders to her presence in the race.

Bernie Sanders is predicted to take California — the largest grouping of delegates from Super Tuesday — to put him ahead of Biden, but not by much. The Sanders campaign was expecting a massive victory on Tuesday and the “Joementum” stole it out from under them.

Lawmakers need to take an Economics 101 class before recommending nonsensical amendmentsLike many others, I daydream about what former Gov. Scott Walker is doing with all his free time. But I Read…

Going forward, this two-person race can change drastically between now and July’s convention. A number of factors are anxiously awaiting their turn to shake up the race moving forward — such as Warren’s drop, her endorsement, if any, whether or not Biden can maintain his momentum going forward and other important endorsements.

Nothing is clear and even less can be predicted.

This is because average citizens do not vote in a way that typically aligns with their ideology or demographic. For example, people liked Warren for her story and specific policy, so while her ideology is very similar to that of Bernie Sanders, it cannot be predicted where her supporters will go. Many people are afraid of taking the risky choice of Sanders when they mostly care about beating Trump, as seen in Virginia.

Two questions that are being posed as the field gets narrowed into two groups — and perhaps Wisconsinites will ask themselves come April 7th — are can Joe Biden maintain his momentum and can Bernie expand his appeal to voters outside his base?

It is worth asking whether or not Biden can maintain his popularity, because voters can be inclined to believe that it might get extinguished as quickly as it ignited. Biden has a lot of drawbacks in his voting history — voting for the Iraq war, voting against busing as a means of desegregation, the 1994 crime bill and others. Not to mention his history of speech gaffs that don’t inspire confidence.

But, can he beat Trump?

Bernie’s greatest drawback is that his supporters and policies are polarizing the electorate. So why should Americans think that he is going to win over swing voters and moderates? Bernie might have a more polished history, but who’s to say that his anti-establishment rhetoric and armed supporters aren’t going to push people away?

The fear of a two-term Trump is enough to make people vote safe. Further, the candidate who wins the support of the African American community has historically shown to be a winning factor.

If Bernie wants to win and go on to win the general election, he is going to have to appeal to moderates, swing voters, the undecided and Obama-Trump voters. New-voter turnout won’t save him for this one.