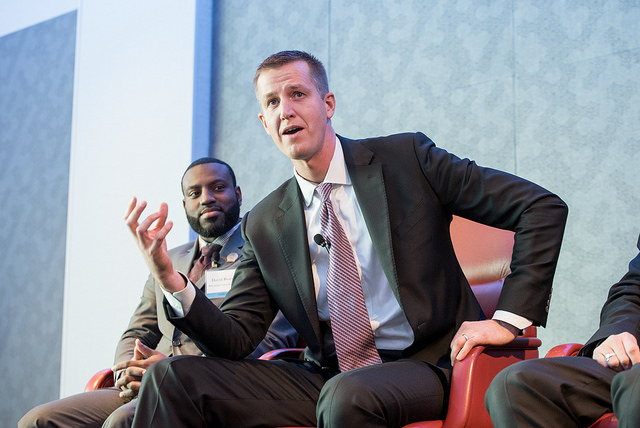 On May 23, 2017, Madison resident Donald Johnson set up a permitted sign in the Wisconsin Capitol rotunda, criticizing Donald Trump and his Wisconsin supporters.

The sign said, “Scott Walker, Paul Ryan and many WI republican legislators support a corrupt, treasonous, … sadistic, racist, and confessed serial groper who thinks nothing about spending millions of taxpayer dollars for his golfing and luxury family vacations and even more billions for a senseless wall … at the expense of millions of people on ObamaCare, veterans, veterans’ children, education, the elderly, the poor, school lunches, environmental protection, national parks, wildlife, scientific research, and so on.”

Later, Rep. Dale Kooyenga, R-Brookfield, removed the authorized sign, explaining that he was “trying to uphold appropriate decorum,” criticizing the sign for lewd language. In October, Johnson filed a lawsuit against the representative, citing infringement upon his first amendment rights to free speech and protest.

The state announced April 2 that Johnson would receive a $30,000 settlement as a result of the lawsuit. Johnson’s attorney Lester Pines said, “It’s absolutely inexplicable and unacceptable to take down a sign just because you don’t like what it said.” Pines is right — as a representative of the government, Kooyenga absolutely does not have the right to censor previously authorized signage under the justification that it speaks badly about their colleagues and constituents.

But here’s the kicker. Kooyenga is not the one paying the settlement — Wisconsin taxpayers are.

On April 3rd, the Democratic Party of Wisconsin issued a statement denouncing the use of taxpayer dollars to settle this lawsuit and calling on Rep. Kooyenga to reimburse Wisconsin taxpayers. “On Kooyenga’s campaign website, he talks about advancing personal responsibility and describes himself as a fiscal conservative,” Democratic Party of Wisconsin spokesperson Melanie Conklin said. “However, if he actually believes in personal and fiscal responsibility, Kooyenga will repay Wisconsin taxpayers who should not be forced to pay $30,000 for his illegal behavior.”

Taking the money for the lawsuit from the pockets of taxpayers would not make an appropriate statement about free speech, as it would essentially exonerate Kooyenga of his unconstitutional actions.

But regardless of who the benefactor of the settlement is, Donald Johnson now has an obligation to the state of Wisconsin. Recall that the contentious sign criticized President Donald Trump’s misuse of taxpayer dollars at the expense of veterans, veterans’ children, education, the elderly, the poor, school lunches, environmental protection, national parks, wildlife and scientific research.

If taxpayer dollars and all of those vulnerable groups are important enough to Johnson that he is willing to endure a several-month-long lawsuit just for losing a sign, it seems mildly hypocritical to now be taking 30,000 of those taxpayer dollars away from those vulnerable groups. In this battle between Johnson and Kooyenga, the only way Johnson can really come out the bigger person is if he donates 100 percent of that money to activist groups that support all the causes he lists as vitally important.

Doing anything else with the money would be insulting and borderline fraudulent. Exploiting taxpayers’ money under the guise of activism and upholding the constitution would be immensely counterproductive to the causes Johnson swore need to be protected. At this point, it seems the best way for Johnson to ensure the preservation of constitutionality and justice is to ensure he doesn’t also spend taxpayer dollars at the expense of veterans, veterans’ children, education, the elderly, the poor, school lunches, environmental protection, national parks, wildlife and scientific research.