Both the state Assembly and Senate gathered Tuesday morning, continued debate throughout the night and finally adjourned Wednesday morning.

Protesters lined the halls of the Capitol throughout the entire deliberation. Demonstrations began Monday evening, where protesters could register to speak at a public hearing.

Wisconsin Republicans claim they passed these bills to create a stronger legislative branch equal to that of the executive, where the power of Democrats Governor-elect Tony Evers and Attorney General-elect Josh Kaul will lie when they take office in January.

Majority Leader Scott Fitzgerald, R-Juneau, said in a statement that these laws have been in the making for eight years.

“Citizens from every corner of Wisconsin deserve a strong legislative branch that stands on equal footing with an incoming administration that is based almost solely in Madison,” Fitzgerald said.

Many Democrats, however, have issued statements against the legislation, which they characterized as a power grab on the part of Republicans. In a statement, state Sen. Jennifer Shilling, D-La Crosse, called the actions “desperate.”

“After these antics, the Republican legacy will be one of corruption, dishonesty, and misplaced priorities, that favor consolidating power over the issues impacting working families,” Shilling said. “The blatant disrespect for Wisconsin voters is an attempt to undermine the validity of elections that don’t go their way.” 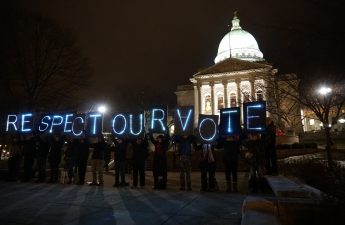 ‘You are the winter soldiers:’ hundreds gather at the Capitol to protest Wisconsin RepublicansHundreds of people gathered Monday at the State Street side of the Capitol building to protest a series of proposals Read…

Additionally, the legislative package curbs the power of the attorney general by eliminating the position’s power to appoint a solicitor general. The new laws allow legislative employees to hire outside counsel for lawsuits, rather than the Department of Justice’s lawyers.

The Legislature also passed a measure limiting early voting to two weeks before an election and approved 82 of Gov. Scott Walker’s appointees, which Evers asked him to withdraw in a statement yesterday.

These bills now head to Walker to be signed into law. The outgoing governor has voiced support for these measures.