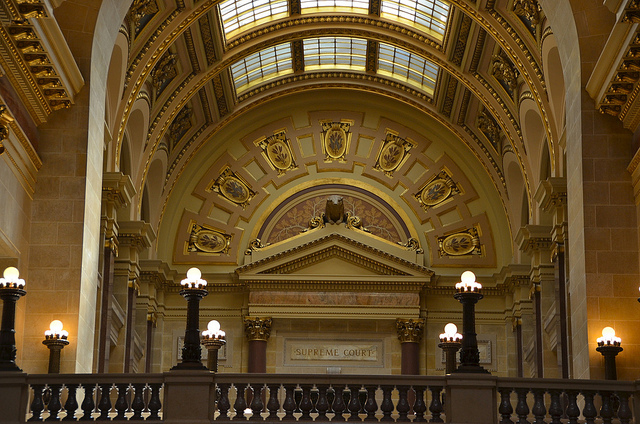 The Wisconsin Supreme Court may review the constitutionality of a tool used by state judges to help determine the level of risk a defendant poses to a community.

After receiving a six-year prison sentence for stealing a car and fleeing from an officer in his 2013 case, Eric Loomis appealed because the judge sentencing him cited a Correctional Offender Management Profiling for Alternative Sanction assessment that deemed him likely to commit another crime — making him a poor candidate for probation.

The appeals court struggled with two areas where it thought the instrument may infringe on the rights of defendants and requested the state Supreme Court rule on its constitutionality.

First, defendants currently cannot challenge the scientific basis of the conclusions the assessment reaches. Additionally, it uses gender as a determinant of risk level.

Jeremy Newman, University of Wisconsin Law School professor, said in an email to The Badger Herald that technically, COMPAS is not meant to sway a sentencing decision by a judge. Instead, the risk-assessment tool was designed to help the Department of Corrections determine what level of supervision a defendant should receive.

But he said the findings may impact a sentencing when a judge fears exposing communities to a danger.

“A main factor at sentencing is protection of the public and if judges think the COMPAS results show that an offender is ‘high risk,’ it’s not a stretch to think that judges are sentencing people more harshly than necessary based on a software tool that isn’t designed to be used by judges to sentence people,” Newman said.

UW Law School professor Michele Lavigne said in an email to The Badger Herald while there is “nothing wrong” with helping judges make informed decisions, COMPAS relies on “static factors beyond the control of the defendant” when determining appropriate prosecutions. She cited the parents of the defendants’ education and imprisonment records as examples.

Lavigne said the assessment often favors wealthier people while it is “suspected” to over-label minority citizens as high risk. She said the use of factors like gender and socio-economic status by COMPAS are “unconstitutional” under federal law. According to Lavigne, the use of these guidelines impact “individualized sentencing.”

“What we’re talking about is sentencing a human being based on some kind of statistical analysis that supposedly tells us whether the individual is likely to re-offend,” Lavigne said. “And that determination is based on characteristics of other people (those in the study group).”

Lavigne said this means it fails to abide by “psychological principles and ethics,” even though it has been administered 50,000 times for both the Department of Corrections and courts.

“This means we have no idea about the validity of the methodology and no idea whether the risk classification is in any way reliable,” she said.

Lavigne said COMPAS was introduced only two years ago and its use has spread across the state. She said currently the question is whether or not Northpointe will release its methodology and if it does not, what instrument may replace it.

Donald Downs, a UW political science professor, said discontinued use of COMPAS will likely not have a major impact on the state unless it came with retroactive effects. He said if the invalidation of the assessment tool leads to retroactive effects, outcomes of cases that used the instrument in the past two years could be altered by the change.

Downs said while COMPAS is meant to function as a guide for judges by limiting the ability of defendants to question the viability of the assessments, judgement may also be swayed to rely more heavily on them.

“You want this sort of software to be a guide,” Downs said. “You don’t want it to direct outcomes. You want it to inform outcomes.”