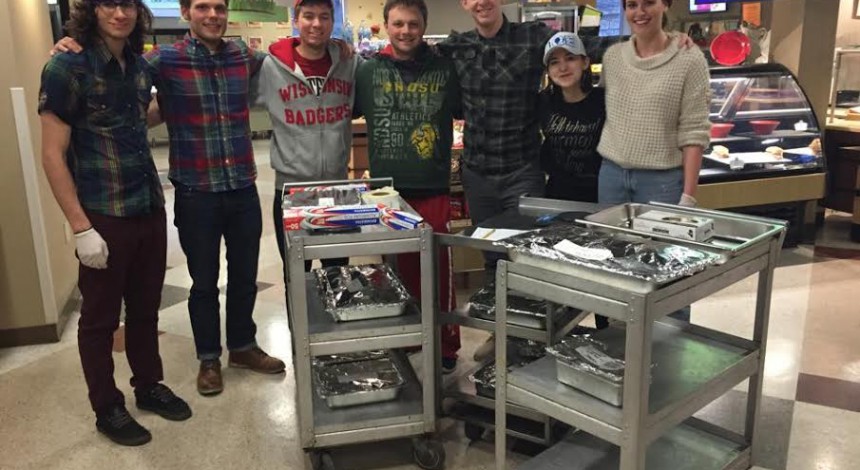 The efforts of four University of Wisconsin students to address hunger in the campus community have come to fruition after more than a year of planning.

Katherine Kokklinias, Colin McReavy, Shruti Rajan and Meaghan Sargent created a local chapter of Campus Kitchen, which uses leftover food from UW dining halls to prepare meals for those in need on campus and in the community.

Kokkinias said she and her co-founders have worked on the project for over a year. She heard about the national chapter of Campus Kitchen after researching ways to address poverty in the Madison area and soon began working with the organization to create a chapter at UW.

“We were drawn to Campus Kitchen because they offered a more holistic approach to fighting poverty and hunger,” Kokkinias said. “Hunger is a multi-legged beast, and if you just attack if from one leg, you’re not going to get far with it.”

Although the organization had a soft launch earlier in the year, the official opening event on Thursday went well with food preparation and distribution, Kokkinias said.

Repurposed food is stored at St. Francis Catholic Church and prepared at the various locations where meals are served, Kokkinias said. In fall, hot meals will be provided at various locations once a week, she said.

As the organization expands, leaders hope to recruit more volunteers to help with marketing, budgeting, preparing and serving food, Kokkinias said. She said the organization also plans to reach out to local farms for fresh produce and to restaurants and catering businesses to repurpose more leftovers to people around campus.

“We are currently setting up a solid foundation so Campus Kitchen will be something that is stable and sustainable that lasts and makes a difference each year,” Kokkinias said.

Julie Luke, associate director for UW dining halls, said they are excited to see leftover food being put to good use. She said campus culinary services have already worked with Campus Kitchen to repurpose food for students at FASTrack meetings.

The students were originally inspired to begin the organization after seeing firsthand the poverty present around the Madison area and within the student body, Kokkinias said.

“When you think about hunger you tend to think about what’s going on in the Madison community and around us, but many times what goes overlooked is students who are sitting next to you in class or walking down the street right next to you,” McReavy said in a previous interview with The Badger Herald.

Ald. Mike Verveer, District 4, said while it might not be immediately apparent, poverty and hunger are present on campus.

He said as rent comes due, many students are found hard-pressed to afford healthy meals.

“This new organization will ensure unused food at university housing will get into the hands of people that need it in our community, and for that I commend the students who are stepping up and organizing this new initiative,” Verveer said.