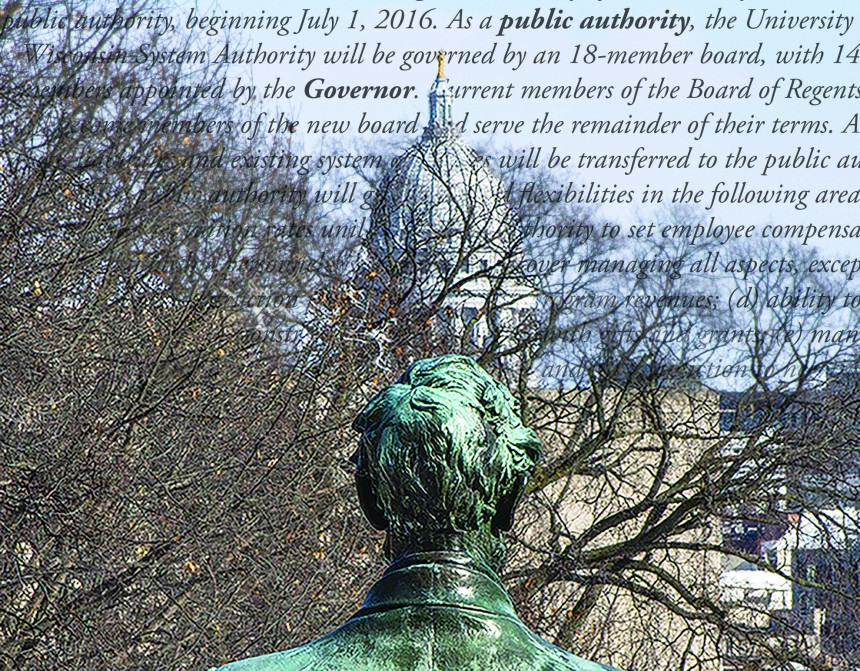 Gov. Scott Walker’s biennial budget proposal released last month includes a drastic shift of authority from the state to the UW System – especially with regard to tuition, procurement and construction – the implications of which remain unclear even to system officials.

Walker’s plan to restructure the state’s public colleges and universities would shift the ­­­­UW System campuses from a government agency to a ‘quasi-governmental’ body, giving the Board of Regents vaguely more autonomy in certain areas, Noel Radomski, director of Wisconsin Center of the Advancement of Postsecondary Education, said.

“This is highly unusual,” Radomski said. “No one from the UW System or UW-Madison has released any document interpreting what UW System authority means. For the life of me, I have no idea why that is the case.”

Radomski said due to the uncertainty surrounding the public authority model, he is concerned about what the model could mean for campuses.

He is not alone in expressing confusion. UW-Madison education policy professor Sara Goldrick-Rab said she does not even think UW-Madison Chancellor Rebecca Blank or the governor can fully outline the implications of the public authority.

UW System President Ray Cross and Blank have expressed interest in the system having public autonomy.

At the UW System Board of Regents’ February meeting Cross said giving the system more authority would be the “best model.”

“In my opinion, in this state and at this time, a UW System authority is the best model to govern and deliver a public university committed to the core principles of academic excellence, access, responsiveness, and affordability for our students, parents, and taxpayers,” Cross said at the meeting.

Walker expressed this month in a conference call he would be willing to work with lawmakers to cap tuition past 2017, the time by which, under the public authority model, the Board of Regents would have complete tuition control.

However, Joe Gow, Chancellor of UW-La Crosse, said tuition autonomy is a major part of the public authority model. Without it the university would not only be restricted from moving forward, but also struggle to protect what it has right now, he said. He believes the regents would make tuition decisions wisely and responsibly.

Goldrick-Rab also said she thinks any interest in the public authority model hinges on the system having purview over tuition.

“I have a feeling that [Blank] doesn’t want public authority if she doesn’t get tuition authority,” Goldrick-Rab said.

However, concern regarding tuition has resonated among Republican lawmakers who worry rates will spike if the Board of Regents has full authority.

Sen. Stephen L. Nass, R-Whitewater, has said he worries there will not be enough checks in place for the regents, who are less accountable to those paying in-state tuition for UW schools than state lawmakers.

Mike Mikalsen, a spokesperson for Sen. Steve Nass, R-Whitewater, said the UW System has never shown any like or desire to save money.

“The UW System’s definition of autonomy is we want to be able to spend more without anyone telling us no,” Mikalsen said.

He said this usage of the greater flexibility is what could eventually lead to “nasty hikes in tuition increases.”

In a previous interview with The Badger Herald, Sen. Sheila Harsdorf, R-River Falls, said greater autonomy for the UW System has been desired for many years as an opportunity to find cost savings that would be used to meet the needs of students. She highlighted the importance of looking both of the merits and downfalls of going this way.

“As a long time advocate and supporter of greater flexibilities for the UW System, I believe that additional flexibilities will provide them with greater ability to make management decisions on the campuses and system,” Harsdorf said.

In 1996, UW Hospital split off from the UW System and became its own public authority, giving it many of the same flexibilities that would be granted to the UW System under Walker’s budget.

Included in the increased autonomy, UW Hospital saw bonding authority for construction projects, a provision included in the UW System public authority proposal. This would mean campuses would no longer have to go through the State Building Commission to take out construction loans.

Radomski said he is concerned there is contradiction with some provisions related to construction.

“UW-Madison would have to pay off bonds instead of transferring authority for building projects to the System, but it’s not clear who will pay the bonds. That could be a new cost which goes against philosophy of flexibility,” Radomski said.

Under the public authority model, the UW System authority would no longer fall under state procurement requirements. Instead, the System authority would be treated like a city or municipality and be exempt from the traditional process for state agencies, which would make purchasing easier and, hopefully, less expensive, Radomski said.

Radomski said the UW System would still have to go into agreement with the Department of the Administration, or ultimately get state approval before making purchases.

He said it is unclear how much savings this change will actually accrue, especially since the System will still have to go through the DOA for any cooperative purchasing agreements.

“When you actually read the bill you’ve got all these caveats or limitations,” Radomski said. “There’s no document from the System to give us any interpretation really of any of this.”

UW System spokesperson Alex Hummel said there is still a lot to be determined in terms of the relationship the System would have with the state, but that the System would still ultimately be accountable to the state of Wisconsin.

In 2005, the state of Virginia passed legislation in a dramatic move to give the public universities more freedom from the state, a change reminiscent of Walker’s public authority plan for the UW System.

The Virginia Restructuring Act, which gave the state’s 15 four-year public universities increased flexibilities similar to those the UW schools would have as a public authority. Since the shift, Virginia university and college officials have enjoyed increased autonomy in areas like tuition and construction.

There are a few key differences in the structure between Virginia’s model and Wisconsin’s that Radomski said are crucial. He said the biggest difference was the diffusion of power Virginia’s coordinating board had, something he said the UW Board of Regents lacks.

“The coordinating board has less power, and therefore the campuses have more power,” Radomski said. “Every campus has its own board; that’s a significant difference, that’s why their efforts are more successful, because it’s done at the local level.”

Radomski said something else that set Virginia’s shift apart was how the state went about the change.

There continues to be large amounts of uncertainty among UW officials about exactly what the public authority model would entail, which Radomski said is worrisome. In Virginia, campuses were more involved in the bipartisan effort to shift the universities away from the state.

“Everything was out in the public,” Radomski said. “That’s a significant difference.”

UW Hospital as a public authority

Hummel said the UW Hospital’s status as a public authority has certain similarities with the proposed model for the UW System.

One of the changes for the UW Hospital, Radomski said, was the addition of its own human resources division, a change that is already set to go into effect for the UW System this July, regardless of the outcome of the 2015-17 biennial budget.

Radomski said a similarity is the UW Hospital also got bonding authority, a provision suggested for the UW System authority. This allowed the hospital to build new clinic buildings around Madison, Radomski said.

During the UW Hospital shift, Radomski said the nurses’ unions negotiated to stay in place, but since Act 10 was passed in the last budget – effectively disempowering public sector unions – union negotiations for the UW System public authority will be less important.

Radomski said when UW Hospital became a public authority, they had to transfer around $10 million to the state of Wisconsin, but it would be unclear if something like this would take place in the System shift.

“Will there be the provision if the UW System authority passes that there would be a transfer?” Radomski said. “I don’t know.”