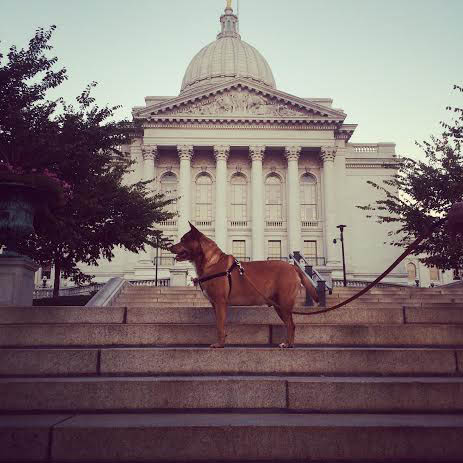 A new series of proposals from city officials hopes to end the stigmatization of pit bull type dogs and better the quality of life for all types of Madison’s pets.

Ald. John Strasser, District 14, said the new package combines several individual proposals, including the prohibition against breeding in residential neighborhoods, with exceptions for service animals and people who breed for competition. In addition, if an owner permits an animal to have a violation of running at large, biting or even illegal breeding, Dane County Animal Services can order the animal to be spayed or neutered, Strasser said.

Strasser said he met with the city’s health and animal service departments several months ago with a proposal concerning several initiatives of animal welfare. After discussing each issue one at a time, they determined the most important initiative was the destigmatization of pit bull type dogs, Strasser said.

Strasser said his goal is to end the bias against pit bull breeds and work towards proposals that will promote better lives for all animals in the city.

An expanded, packaged proposal was later considered a better process after it became clear that the original proposal would receive enough votes from the council, Strasser said. The new proposal could then include concerns from various other groups that had spoken out about the pit bull ordinance.

An increase in the licensing fee for 2016 corresponds with change in policy where there will no longer be issued warnings to people without a pet license, Strasser said.

If the police or animal control find an animal to be without a pet license there will be a $125 fine. That money will help offset the cost of the animal welfare programs and expand outreach and education programs, he said.

Strasser said he and the public health and animal service departments have been meeting with the Dane County Humane Society and the Humane Society of the United States, shelter organizations, shelter veterinarians and people who run low-cost spay and neuter clinics.

“We’ve been taking these issues topic by topic to get a consensus of changes that we could all live with,” Strasser said.

The Dane County Humane Society was one of the many groups that shared their concerns about the original proposal, Public Relations Director, Gayle Viney, said.

Although the Dane County Humane Society was part of the original reanalyzing process of the ordinances, they have yet to review the new proposed ordinances. Viney said they will be reviewing the proposals next week.

Viney said the humane society is glad that other groups concerned with the welfare of the dogs and community participated in the discussion because it is an important issue.

“We are all very excited to work together with other participating groups to come up with ordinances we feel are in the best interest of all the dogs, and ones that we can agree on,” Viney said.

The ordinance was presented to the council Tuesday, and next week a group of citizens will meet to discuss the language of the proposal to determine if there is anything that needs “tweaking,” Strasser said.

Three proposals from the package will then go to the city’s board of health, and one of them will go to the zoning committee.

“I see no obstacles that will get in the way of passing it,” Strasser said.

Correction: The original headline and lead said the proposals were based on the mandatory spaying and neutering of pit bull breed dogs, which was incorrect. The proposals are focused on ending bias against these types of dogs specifically and promoting better general welfare for all types of animals in Madison.