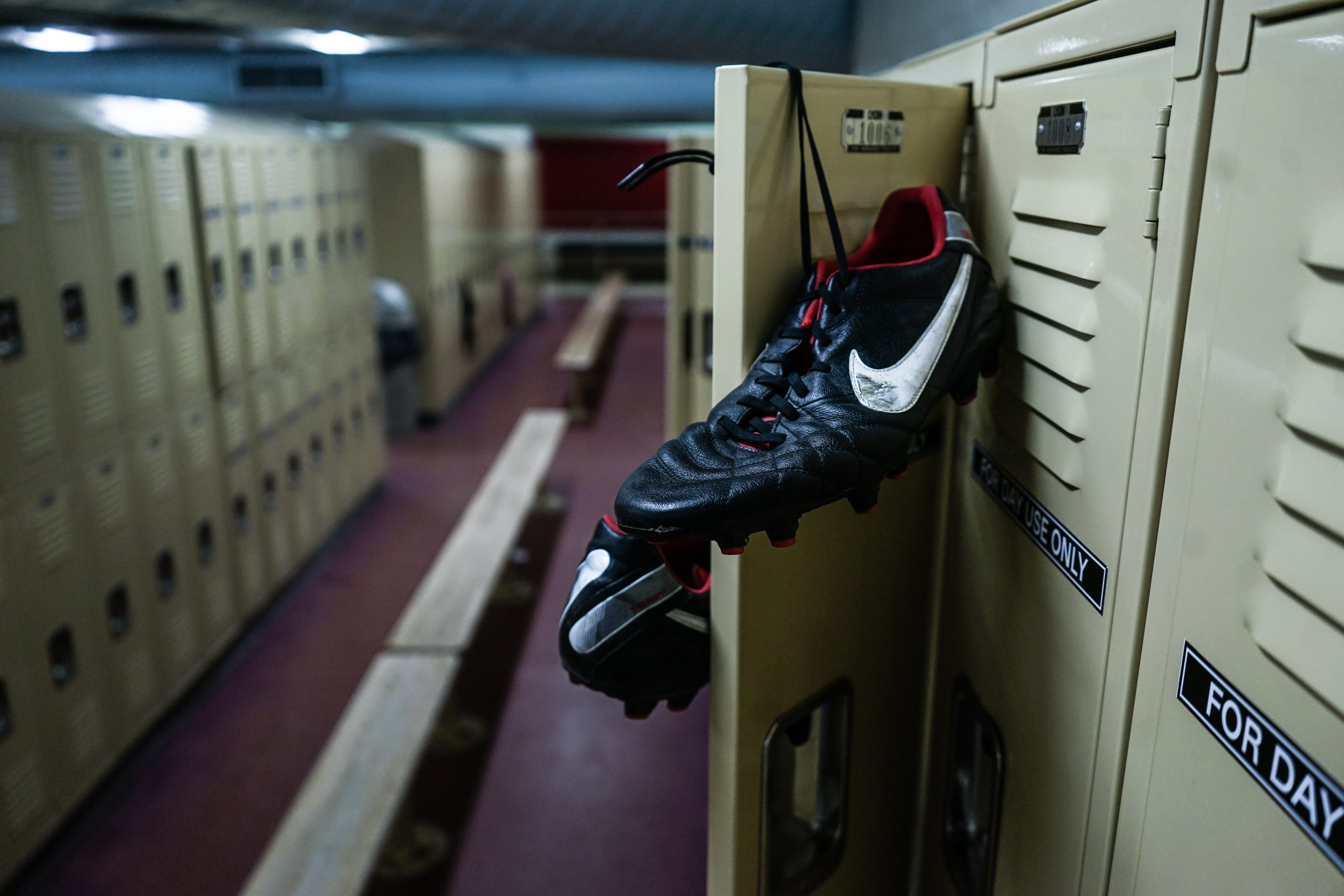 When Madison police arrived at UnityPoint Health – Meriter hospital in late April, the first thing they noticed was the smell of alcohol.

They encountered a woman hardly able to lift her head due to severe intoxication. She did not open her eyes during her interview with police and at one point had to stop and throw up. The same woman identified University of Wisconsin football player Quintez Cephus to police, saying he was the man who sexually assaulted her.

She told police that after a night out with Cephus, whom she met through a mutual friend, Cephus drove her and another woman to his apartment. The woman said she and her friend were drunk when they left the bar, but said Cephus was sober. At one point, Cephus declined any of her drink because he was driving, she said.

The night became a blur from there, the woman told police. She said she remembered the assault of her and her friend, saying she “literally thought [she] was going in and out of consciousness.”

The woman told police she also remembered waking up to Cephus and sophomore UW football player Danny Davis standing over her, laughing and taking pictures.

The second woman interviewed by police said she was so intoxicated she didn’t clearly remember being introduced to Cephus at all. She said she only remembered a fleeting moment in Cephus’ car and sprinting out of his apartment early in the morning.

She said she was informed of the night’s events by the first woman who insisted she have a rape kit done.

“I know I would never consent to have sex with someone I didn’t know,” the woman told police.

Davis later confirmed the two women were clearly drunk, and even said there was a moment where one woman sat on the floor of the bar and needed to be convinced to stand up.

Cephus told investigators he had sex with both women. At first, Cephus denied taking any photos but later said one was taken and immediately deleted.

Two days before the allegations became public, Cephus announced an indefinite leave of absence from the team in anticipation of the pending charges. UW Athletic Director Barry Alvarez announced after charges were filed that Cephus would be suspended from the team indefinitely.

Cephus’ defense attorneys are proclaiming his innocence, suggesting surveillance footage from the night and text messages obtained between one of the women and Cephus prove the women were not impaired.

Cephus has declared his innocence on Twitter, saying has been “wrongfully accused of unlawful conduct” and is “innocent of any allegations associated with the consensual relationship.”

While there are plenty of voices condemning his actions and calling for legal consequences in addition to his suspension from the football team, there are also those who stand behind him.

UW postdoctoral student of sociology Nona Maria Gronert, who is writing her dissertation on campus sexual violence, strongly cautioned against rapid defense, emphasizing how detrimental it can be for survivors.

“That response is really disheartening and damaging,” Gronert said. “It sends a message that the survivor isn’t a full community member and doesn’t deserve to be believed.”

Although Cephus maintains his innocence, false reporting is a rarity, as only between 2 and 10 percent of reports of sexual assaults are later found to be false.

“And yet,” Gronert said, “this whole narrative of people, especially women, falsely accusing someone of sexual violence is so rampant.”

Each case of sexual violence presents its own details pertinent to due process, but one doesn’t have to look long to notice a telling trend.

In 2016, after a university investigation, 10 University of Minnesota football players were accused of sexual misconduct after the alleged gang rape of a female student. Five of the student athletes were either expelled or suspended in violation of the student conduct code, but others were cleared.

None of the football players faced legal consequences.

In January 2018, University of Minnesota basketball player Reggie Lynch was expelled for two cases of sexual assault. The first case resulted in a suspension that didn’t even occur during the basketball season and no criminal charges were filed. This was the third woman to accuse Lynch of sexual assault. Lynch proclaimed his innocence, blaming what he called an unfair national atmosphere that he believes too quickly condemns those accused of sexual assault.

Lynch’s college career is over, but he faced no legal action.

The first case allegedly occurred in Winston’s apartment while he was still a college student and ended in a civil lawsuit settlement. The second allegedly took place in an Uber where Winston is accused of grabbing his driver’s crotch.

Winston will serve a three game suspension this year for the second set of allegations but faces no criminal charges.

While athletes often gain notoriety for sexual assault charges brought against them, studies have found that the sexual assault epidemic infects the entire campus community.

“The increased public attention carries legitimate expectations that the university will take allegations seriously and not appear to condone misconduct,” the policy reads. “Failure to meet public expectations may undermine the public trust in the university and therefore impair its ability to carry out its mission of teaching, research and public service.”

The policy states that when an arrest is based on conduct involving serious crimes, a student athlete will immediately be suspended by the athletic director from competition and practices, as was the case with Cephus.

Following the suspension, the athlete will still receive financial aid and their name will remain active on team lists and with Student-Athlete Services. They will also continue to be granted access to weight training and sports medicine facilities, as well as academic support services.

Once an athlete has been charged, the athletic department cannot do any more than suspend the athlete, Director of Athletic Communications Brian Lucas said. Only in cases where new information becomes available would that change.

“UW–Madison views allegations of sexual violence with deep concern,” McGlone said in an official statement. “When anyone tells us that they have experienced sexual misconduct, we respond.”

The NCAA relinquishes responsibilities to a university in cases of sexual misconduct. As long as a university can show they are adhering to their individual discipline policy and sexual assault education program, they are in compliance with NCAA protocol.

While a university response is predictable given the administrative policies they must adhere to, public opinion in cases of sexual violence quickly becomes fragmented and convoluted.

Despite witness testimony confirming the two women were significantly drunk, and Cephus’ confirmation he engaged in sexual activity with both women, there are voices determined to defend the wide receiver.

On Aug. 23, Cephus’ former high school coach Jamie Dickey stood before television cameras in a courtroom at Cephus’ side.

“He’s a son to me, he’s a brother to the three daughters that me and my wife have and he’s a great young man,” Dickey said. “I can’t wait for all the facts to come out so that he can be exonerated.”

But the narrative, in which an alleged sexual criminal’s personality doesn’t align with their crimes, is pervasive and destructive, Gronert said.

“What we see over and over in cases like this are statements like ‘this is such a great person who I know, they could never have done this,’” Gronert said. “What I think lies below those statements is the normalization of coercion and sexual violence.”

Through her research, Gronert has cultivated an extensive familiarity with the dynamics characteristic of sexual violence. She said she often wonders what form conversations surrounding “sexual conquests” take among groups of powerful men.

“When I think about men who are in powerful groups who are accused of sexual violence, there’s plenty of evidence to suggest how these men talk about women and sexual conquests behind closed doors — how they scored,” Gronert said. “Fish don’t notice the water they swim in.”

Gronert also believes people generally expect a survivor’s testimony to be absolutely spotless in order to be believed, something she called “the perfect victim.”

That phenomenon reared its head in Cephus’ case.

“Only time will tell whether Cephus is guilty or not,” the column read. “Meantime, perhaps we should give Cephus the presumption of innocence in the court of public opinion.”

The attorney continued on, highlighting the defense’s claims that surveillance footage from that night showed the women walking after the incident without displaying signs of impairment.

Gronert said assumptions of alcohol consumption play directly into the issue of demanding that each case is accompanied by its own perfect victim. She said alcohol often discourages the public from believing a survivor’s testimony, which Gronert feels is a serious issue.

From locker rooms to living rooms

Cutting through the noise of the nationwide conversation are voices with unique proximity to the issue.

Paul Jackson II transferred to UW in 2017 to play football. Now a redshirt junior, Jackson has been in the locker room since the allegations against Cephus were released, and said the opportunity to talk candidly about the case with the coaching staff is available if players feel inclined.

But he said the repeated narrative has been about the team’s ability to move forward following the news.

“If a conversation is really needed, that can happen, but right now we’re just carrying on as a team,” Jackson said. “If it was something where he was found guilty [the philosophy would be] ‘this is our teammate, whatever decision happened, happened — but we’ve still gotta move forward as a team.’”

Jackson believes the university has handled the case well, commending them for holding Cephus accountable regardless of his value as a source of revenue for the school.

In addition to the tangible benefits available to student athletes — including branded apparel and free tutoring services — there is a perception that student athletes receive special treatment in cases of misconduct.

But former UW basketball player and current UW graduate student Ashley Kelsick doesn’t think the public defense of Cephus has any connection to his status as an athlete.

“I don’t see anyone rushing to defend him simply because he’s going to catch the next two touchdowns Saturday,” Kelsick said. “It has nothing to do with being an athlete.”

Kelsick pointed to a wider issue of male privilege prevalent in the justice system, citing the widely criticized sentencing of Alec Cook in June, which left many questioning the system’s ability to adequately deliver justice in cases of sexual assault.

In an era where conversations aimed at holding perpetrators of sexual violence accountable are more common, a pattern has arisen in which men in positions of power have committed acts of sexual violence, sometimes for years, without consequence.

Two voices ring out louder than the rest. There are those who rush to the defense of the accused, suggesting the weight of the #MeToo movement has obscured the presumption of innocence generally afforded in a court of law.

Then there are those who advocate for the voice of survivors, citing overwhelmingly low statistics of false reporting and an environment where a survivor’s voice is often criticized more than the voice of the accused.

Historically, there have been allegations of sexual assault against athletes in similar cases with little to no consequence either from their university or from the legal system. This prompts the question — what’s next for Cephus?

Institutions like UW take action when allegations become public, but the allegations persist. The trajectory of this pattern remains to be seen, but simply punishing athletes doesn’t seem to be leaving a noticeable mark.

“With campus sexual violence, we need to think about healing and how to heal the larger campus community,” Gronert said. “Because just punishment isn’t going to cut it.”