On most frigid January days, just a few people meander to the steps of the state Capitol. But one day after the President Donald Trump’s inauguration, people from across the state came to Madison to speak out in support of women’s rights, the LGBTQ+ community, Black Lives Matter and more.

The sea of pink-hat-clad women and men carried brightly decorated signs as a local Madison punk/rock band, Token Minority, took the stage in front of the Capitol doors.

Shouting the lyrics “This orange-faced elephant will never be my president,” the band stomped and clapped in protest along with 100,000 protesters in front of them.

“I think throughout generations, music is something that is remembered from different time periods.” Dana Rowe

“I was beyond humbled,” Quinn said. “So surprised with the turnout: 100,000 people. I think I can speak for us all when I say that’s probably the biggest crowd any of us played in front of.”

Token Minority uses their lyrics to criticize society and believe in punk/rock as a past and future agent of change. 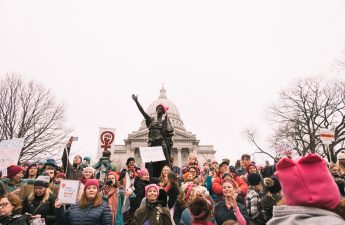 Artists from all backgrounds make Madison home and a place to articulate their passion. From hip-hop and rap to punk/rock and folk, artists with a passion for public affairs want to create an outlet to express their individual feelings.

But there seems to be a dominating message bubbling up from the undercurrents of most music scenes: a goal of awareness, equality and change for underrepresented groups of people.

Music as a political movement

Punk/rock is one of the most emotional and politically charged genres to establish roots in the Madison music scene. Spawning from an often heated political climate, punk/rock bands like Token Minority thrive in a tight-knit community with strong beliefs, like Madison.

“I think throughout generations, music is something that is remembered from different time periods,” Rowe said. “It’s kind of integral to social movements.”

Rowe said musicians have made themselves a vocal part of various movements including the civil rights and anti-war movements of the 20th century along with the Riot Grrrl Movement, an underground feminist punk wave starting in the 1990s — so Token Minority’s political and social stances aren’t new.

While punk/rock may be one of the most politically charged genres, other genres, artists and events also work to create messages of their own.

One of these artists includes Madison native Aarushi Agni, who inserts her personal experiences as a woman of color into both her stand-up comedy and work with her band, Tin Can Diamonds. The latter, whose name is inspired by “finding beauty in unexpected places,” is a folk/rock project composed of Agni, Ben Strohbeen, Mitch Johnson and Dave Janus.

While Tin Can Diamonds’ songs aren’t always, or even usually, explicitly political, deeply critical songs of consumerism like “Make Up Your Mind” make waves with lyrics like, “There’s a campaign to control you that you didn’t read about. Everyone around you wonders why you’re holding out” and “The vultures, taxmen, census, bigots are creepin’ at your bedside: some for kindness, some for sport.”

Agni said she faced hurdles like sexism, racial prejudice and alienation while establishing herself in the Madison music scene. She initially struggled to find a group who respected her and her musical talents.

“I had been in other groups before, and I always had issues with sexism in bands that I was in,” Agni said. “I always had people discredit my contributions or treat me differently because I was female or made comments on how I look or how that contributed to our image. Even just having female vocal chords compared to male vocal chords [was seen] as some kind of detriment.”

Agni’s journey to find and establish Tin Can Diamonds sheds light on the issues that still face marginalized musicians in Madison. While Agni generally believes the music scene as a whole is welcoming, it still has its issues.

Though Madison is often depicted as liberal, open-minded and progressive, there continues to be major social problems, which make it harder for oppressed people to enter the music scene or even simply visit venues to watch performances.

Safety and security are often concerns for the LGBTQ+ community in many nightlife spaces. Born out of a frustration with the nightlife scene and lack of visibility, Queer Pressure, an event which aims to create equity by incorporating entirely queer performers and encouraging intentionally separate spaces. 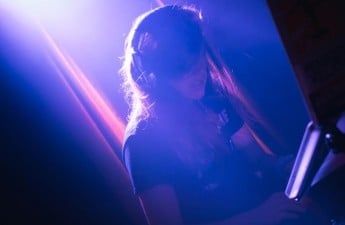 Queer Pressure led by Joey Bee — better known as DJ Boyfrrriend — and Sarah Akawa is one of the few musical entities that use the power of art to make changes in the tumultuous, sociopolitical landscape of American culture.

Queer Pressure seeks to create spaces for the LGBTQ+ community, people of color and other disenfranchised groups. The event was designed with the intent to be entirely queer and a space where the community could dance without fear.

“People booking shows, controlling grant money or participating in any scene as an artist or as a consumer should take a hard look at how often they have booked, attended or supported an all-male or all-white show,” Akawa said. “Even one is too many.”

For Majestic owner Matt Gerding, the political nature of his company comes in the form of inclusivity and speaking out against policies that challenge the welcoming space he created.

“There is no reason we shouldn’t have equal representation in art and music at all levels.”Sarah Akawa

“Live music venues are a place where we celebrate a diversity of music that we bring, which by virtue of that comes along with celebrating the diversity of the crowds that attend them as well,” Gerding said. “We want to always be very welcoming as a venue. When we see things locally or nationally that we feel conflict with that sense of openness and inclusiveness, every now and again, we will speak against it if our ethical code pushes us to want to make a statement about something.”

To help celebrate the diversity of music spaces, Dave Bonson moved to Madison searching for something more than his small hometown of Rhinelander could offer. Inspired by the Riot Grrrl Movement and the band Bikini Kill, he found acceptance, a thriving punk/rock scene and an outlet of expression. 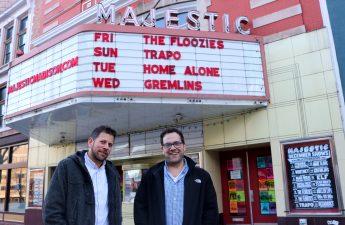 Conversation Starter: Majestic Theater strives for progressive booking, ethicsMatt Gerding, alongside business partner Scott Leslie, founded the Majestic almost 10 years ago, and since then it has become a venue Read…

The GRRRLs Kick Ass Fest, a festival featuring female musicians and performers, was born five years ago from Bonson’s idea to honor his favorite movement and women in music.

Bonson’s upbringing in a small town with a lack of diversity in music inspired him to move to Madison. But creating a festival inspired by the women of punk/rock who showed him new possibilities was always in the back of his mind, he said.

“I ended up finally working my way up through the booking scene [by] knowing the scene, [and] knowing different people,” Bonson said. “I realized I finally have the opportunity to start a Riot Grrrl-type festival.”

All proceeds from the event pay performers and the remainder is sent to the Malala Fund, which works to educate women and girls worldwide.

Over the past few years, Bonson has grown the festival to include a variety of acts, all of which highlight attitudes of equality and badassery. Bonson said he strives to incorporate local, female-driven acts with a platform to perform.

To continue building a nightlife platform, organizers of Queer Pressure, Bee and Akawa push each other and the Madison community for more equity. Incorporating underrepresented music by women, queer people, feminists, people of color, immigrants, people with disabilities and other groups and bringing their “perspectives and messages on to the dance floor” is the way Bee incorporates politics in her art.

Both Bee and Akawa said they are perpetually striving to make their shows, and Madison as a whole, aware of the disparities in the country.

“There is no reason we shouldn’t have equal representation in art and music at all levels,” Akawa said.