Sharp enough to tear through fragile skin. Dull enough not to leave a mark. Strong enough to bring relief from the mind-numbing sadness, hopelessness and despair that comes with everyday life of living with depression.

The first time I self harmed, I was in middle school. The next time it happened, it didn’t stop. As thoughts of cutting seeped into my mind at all hours of the day, self-harm fixation and idealization became the norm. Slowly, safety pins turned to razors and razors turned to shame.

An estimated 26 percent of adults aged 18 or older in the U.S. live with a diagnosable mental health disorder. During the 2015-16 academic year, 4,829 students at the University of Wisconsin sought help from University Health Services for a mental illness, an 11 percent increase from the year before.

Of the $607.56 students pay in segregated fees during the 2016-17 academic year, $196.56 goes to health services. According to the Office of the Registrar, this money supports “the clinical medicine, counseling, health education and public health mission of the student health services.” According to its annual report, UHS spends 27 percent of its funding on mental health care services.

UHS guarantees all students up to 10 individual counseling sessions within a calendar year and up to 20 sessions over the course of a student’s academic degree. After a student maxes out on his or her sessions, he or she has the option to seek out therapists in the community with help from UHS.

There are exceptions to this rule, however, for medical and engineering students. These students have an unlimited number of individual counseling sessions because their services are paid for by their respective schools, Angela Janis, interim co-director of mental health services at UHS, said.

Though the 10 session limit was put into place long before Janis came to UHS in 2014, she said the vast majority of students who use their individual counseling sessions at UHS only end up using four sessions or fewer. She also noted UHS constantly looks for the best way to serve the campus community and has re-evaluated what that means over the years.

“We’re always re-examining our services to see if they make sense,” she said.

But some students, including senior zoology and French major Cristina Zepeda-Almazan, believe the services offered at UHS are not enough. A 2016 UHS survey found that 36 percent of students said they would like to see additional mental health services at UHS.

Zepeda-Almazan works as the outreach coordinator for Ask.Listen.Save., a suicide prevention and education organization on campus. She is also one of an estimated 16.1 million people in the U.S. with depression.

While she said she had been “in and out” of depression symptoms her entire life, during her sophomore year at UW, she noticed a big dip in her mood.

“No matter how sunny it was outside, it always felt like it was thunderstorming,” she said. “That’s just how it always was for me.”

Zepeda-Almazan sought help from UHS in April 2015. She found a therapist whom she felt comfortable with and described her experiences as “amazing.”

“No matter how sunny it was outside, it always felt like it was thunderstorming. That’s just how it always was for me.”Cristina Zepeda-Almazan

She began to use new coping mechanisms to deal with everyday stress. She said she now carries around rubber bands to flick against her skin to remind herself simply to breath when she gets overwhelmed.

Once her 10 sessions were up, Zepeda-Almazan worked with UHS to find someone in the community to talk to. But this time, her experience was different. She had trouble connecting with her new therapist, and traveling off-campus for counseling quickly became a hassle.

She said even though UHS helped her find a counselor outside of the university, the results were not the same.

“[Seeing a new therapist] could be a hit or miss and then you’re just discouraged from going,” Zepeda-Almazan said.

Janis said some of the biggest barriers preventing UHS from expanding its mental health services come down to limited funding and resources.

“We are understaffed to provide the ideal care that we’d like to,” Janis said. “The need has outpaced the growth that we’ve had. There are more people coming in than historically have ever come in.”

Getting ‘creative’ to stretch resources

Janis said previously, the most common diagnosis UHS gave in terms of mental illness was depression, now it’s anxiety. She said the 11 percent increase in patient visits to UHS follows a national trend.

While most students are bound to a finite number of individual counseling sessions, Janis said UHS offers mental health services far beyond that.

In addition to individual counseling, UHS offers several different kinds of group counseling and psychiatry services that do not count toward a student’s counseling session limit. This is one way Janis said UHS has tried to expand its campus reach and give help to a wider range of students.

“We have to be creative in the services we offer to try to increase the reach with the providers that we have,” she said.

A 2012 report from the Wisconsin Center of Investigative Journalism found the university was lacking in the mental health resources it needed to properly serve its student population. But a lot has changed since 2012.

This past September, UHS filled six newly funded positions, two of which include professionals who specialize in addressing the needs of students of color, as part of its two-year initiative to increase providers for student mental health issues. The new hires were brought on partially as a response to the numerous hate and bias incidents reported on campus that were brought to light through the hashtag #TheRealUW.

In addition to UHS services, there are several student organization on campus that seek to provide mental health care services and support for UW students.

The UW chapter of National Alliance on Mental Illness, or NAMI, works to educate students and the campus community about mental illness and the stigma that often comes with it, Conlin Bass, spokesperson for NAMI-UW, said.

This stigma, he said, can come in many forms. One of NAMI’s biggest campaigns is their “Bandana Project.” The purpose of the project is to spread awareness about mental illness and reduce its stigma. Since January, NAMI has distributed 1,300 green bandanas that signify that whoever is wearing the bandana can be used as a resource for mental health purposes.

Hannah Hageman, a UW senior and president of Ask.Listen.Save., said mental health operates on a spectrum and that communication is key when it comes to addressing mental health taboos.

“The more you talk about it, the more you can reduce the stigma,” Hageman said. 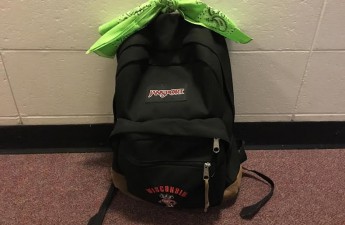 For Zepeda-Almazan, talking about her own mental health, even with friends and family, has been hard.

Though she doesn’t doubt her friends would be supportive, she worries that her peers might get the wrong impressions from the conversation.

“How do you bring that up?” she said. “They might think that you want them to feel sorry for you, but that’s not the case.”

“We are understaffed to provide the ideal care that we’d like to. The need has outpaced the growth that we’ve had. There are more people coming in than historically have ever come in.”Angela Janis

Zepeda-Almazan said even seeking help can be hard because of what she called the “seventh floor stigma.” This refers to the seventh floor of the Student Activity Center, which is home to UHS’s mental health care services.

Janis said UHS is working to address this stigma through outreach and attempting to meet students where they are.

“Our philosophy is there are ‘no wrong doors,’” Janis said.

When it comes to addressing the mental illness taboo on campus, both Zepeda-Almazan and Hageman said students and professors have been willing to play an active role in breaking stigmas.

But sometimes, Hageman said it can be hard for students to talk about the matter because they often grapple to accept their own mental illnesses.

“Students are open to it but still have struggles admitting if they themselves have a problem,” Hageman said.

Students are more stressed now more than ever before, according to the American Psychological Association.

Zepeda-Almazan said dealing with a mental illness is no simple task. There are good days and there are bad days, but she said the most important thing is to never stop working to feel better.

“You just have to keep working it and figure out how to get yourself out of that dark place,” she said. “At the end of the day, the only person who can really help yourself is you.”

Zepeda-Almazan no longer attends counseling in the Madison community. She said she is now in a place where she is comfortable with a monthly visit to her UHS psychiatrist and prescribed medication.

I went through three psychologists at UHS before finding one who I could truly connect with and I was forced to change my medication dosage when I noticed dark thoughts crawling back into my mind.

While every person is different and there are no clear-cut answers when it comes to managing one’s mental health, some things are certain: Don’t be afraid to ask for help and don’t be discouraged if something doesn’t work.