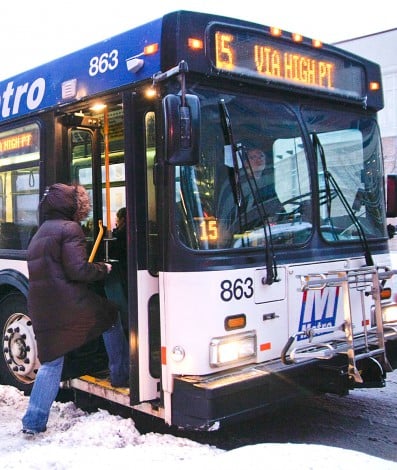 One often-overlooked benefit of the precious money that goes toward segregated fees is the free bus pass. While derided by some on national television, the bus pass provides amazing scenic routes for students to take when they just need to get their mind off of the latest paper they need to write. Here are some of my curated top picks for the best bus routes to take in the name of wasting time.

This route holds a fond place in my heart, and it is also prime for scenic bus riding due to its straight path beyond Capitol Square. Since it goes down Washington Avenue for about five miles, this route maximizes exposure to landmarks while minimizing the amount of directional changes, leading to reduced chances of motion sickness. The six features magnificent views of a McDonald’s, Taco Bell and Burger King, culminating in a close-up of Culvers near the end of the route. Additional landmarks include the castle-like East High School, a retro sign for Trixie’s Liquor and a whole lot of big bus bois at the Metro Transit Center. Window seats can be hard to get on this one during rush hour, so try to arrive early for prime seating.

To make friends, don’t tell people you live in LakeshoreEvery student understands how important it is to meet people and make connections in college. Whether one is looking to Read…

For many out-of-state students, Middleton is but a foreign, mythical land. Sure, people talk about it, but some question whether it really exists. On the 72, riders get a glimpse into Central Wisconsin’s equivalent of Narnia and again get a chance to see a real-life Culver’s. This route also passes the rare Hurts Donut Company, the only one of these establishments on this side of the Mississippi. One might even catch a fleeting glimpse of a swath of trees on this route, signaling an abundance of suburban vibes. Another benefit to this route is its sheer length, clocking in at an average of 48 minutes from start to finish.

There is an airport on the east side of town. I learned this when I took a scenic ride on route 20. Route 20 takes one right into the heart of the action at the Dane County Regional Airport, and one might even be able to observe frantic travelers with suitcases hauling the contents of their lives up and down the aisle of the metro bus. The 20 also allows for fleeting glances at Madison Area Technical College’s shiny windows. However, be prepared to be a little jealous when if one is typically stuck inside Humanities for all of their class, as these shiny signs and modern windows can make Humanities seem even more depressing.

Your 10-step plan to a successful mental breakdownStep 1: Set yourself up for a breakdown Always make sure to enroll in at least 15 credit hours a Read…

Sometimes, one really just needs to look at a Wal-Mart and be reminded that big box retailers really do still exist outside of the State Street bubble. Route 30 provides a prolonged view of this, even taking a stop specifically to marvel in awe of the Wal-Mart. I guess people could get off the bus and shop there too, but most of the time just staring at the blue paint on the outside brings me enough joy. This route also throws in a good amount of residential stops, so riders get to look at some pretty neat houses along the way.

Ah, the classic bus route for wasting time. However, due to its popularity, this route is best utilized for viewing scenery inside the bus instead of outside the bus. On one trip, riders can view students who actually have the motivation to go to the Natatorium from the Southeast campus zone. Another time, hordes of freshmen may try to squeeze together in the front half of the bus, ignoring pleas from the driver to, “move to the back.” Added drama and hijinks can ensue when one rides all the way to Eagle Heights and back, so this is always recommended for scenic bus trips.