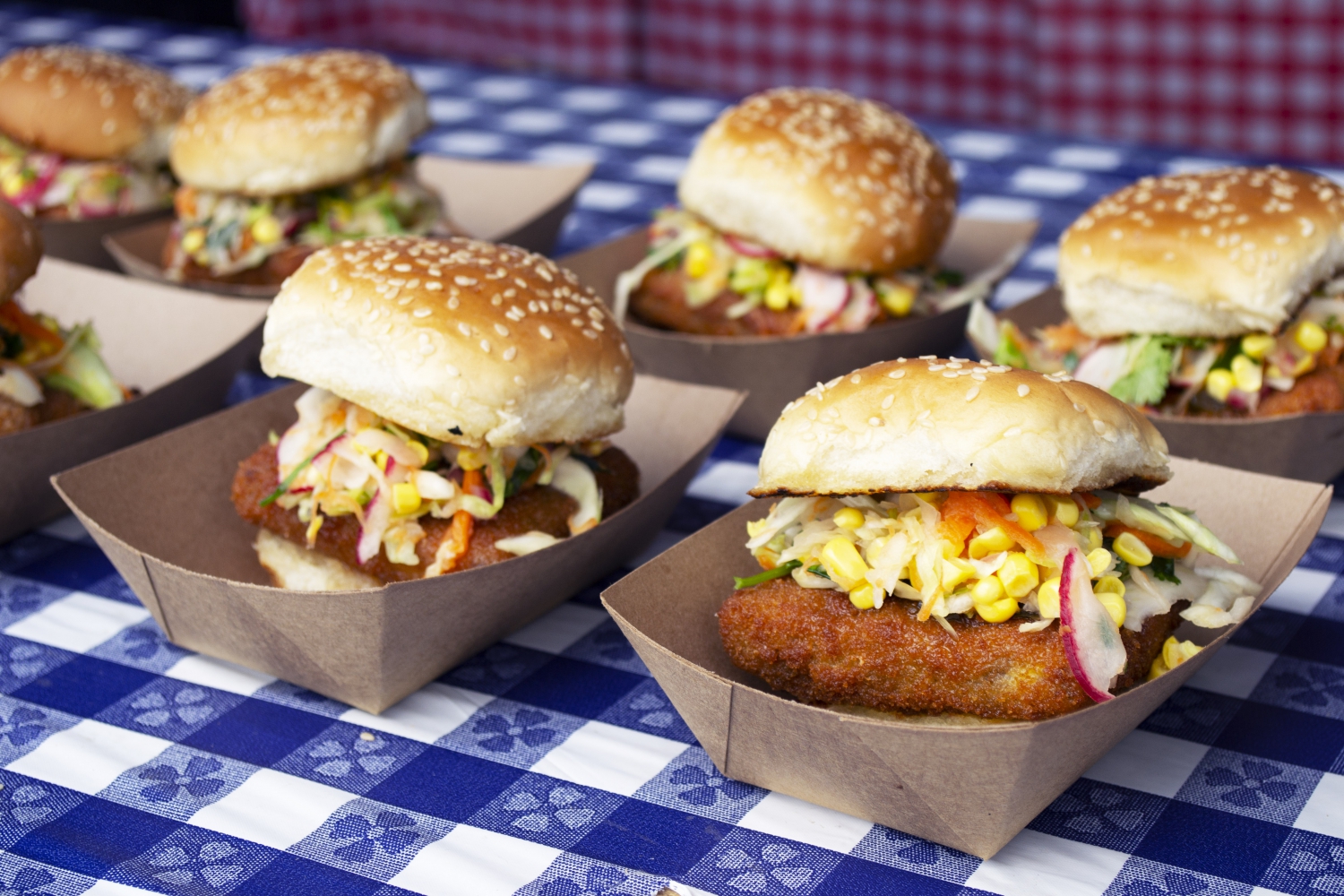 With all the babies running around barefoot on the turf, picnic blankets set up in front of the live band and acrobats, it seemed like the perfect location. A huge bounce house dominated the kid zone, while all of the food and beer lived at the other end under pink and blue tents. 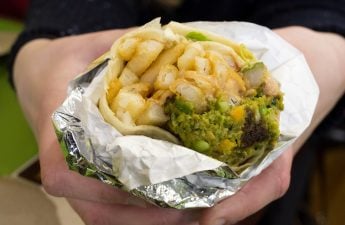 Hosted for five years by the Madison Area Chef’s Network, Yum Yum Fest is a foodie function involving some of the most delicious cuisine in the area. 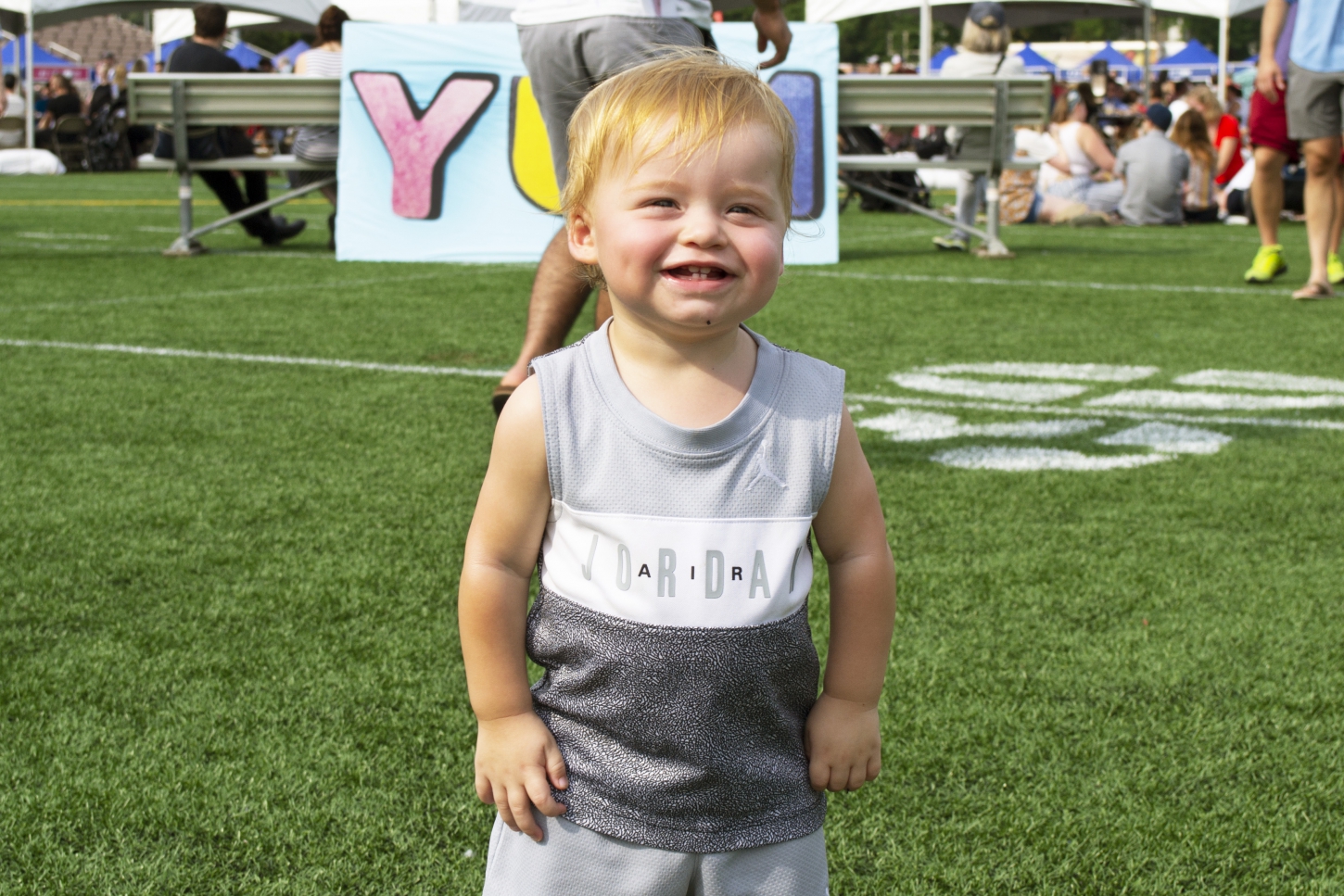 The joint effort between the Madison Area Chef’s Network and Breese Stevens Field goes beyond satisfying local palates. In 2017, Yum Yum Fest raised more than $10,000 for the Community Action Coalition Double Dollars Program, an effort to develop economic and social capacities of individuals, families, and communities in Dane County and surrounding areas, and The River Food Pantry, which offers free groceries, meals, mobile lunches and clothing to those in need.

Proceeds from the Aug. 19 event will benefit the CAC Double Dollars Program and Sunshine Place, a single point of access to social services for Sun Prairie residents who need to support themselves in times of need — particularly following the gas explosion on July 10.

Each restaurant featured one dish to show off. With plates between $4-5 and drinks around the same price, $20 got you a long way. Closed since May when a car crashed into the restaurant, Ha Long Bay made a revival appearance at the festival. The representatives at the festival emphasized they would be opening within a couple of weeks. Honestly I could’ve left right then. I was on a future-pho high.

But then I would have missed out on some pretty cute food-covered babies, and that just would not do. 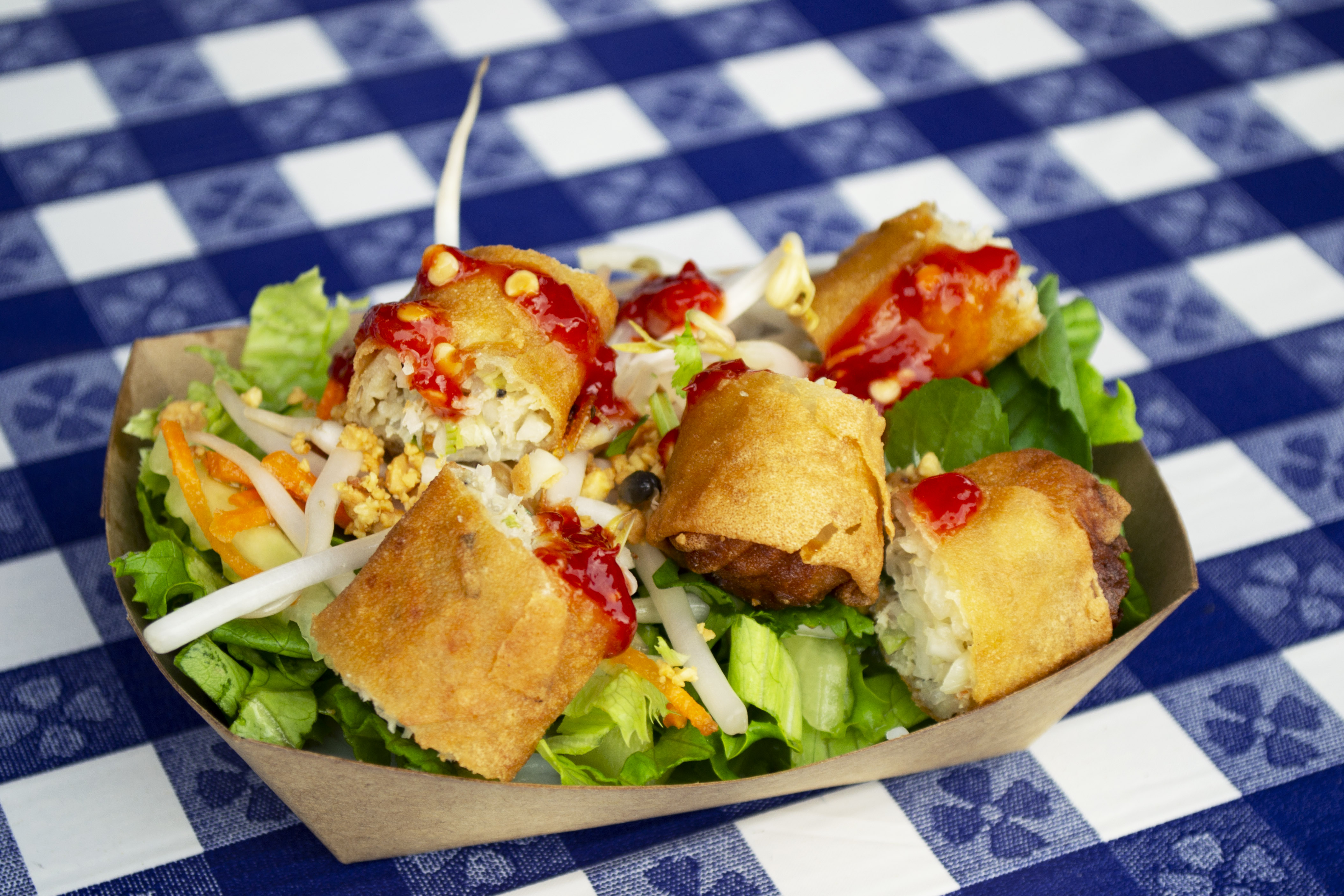 Considering the conditions, no one should have been surprised at the amount of fish dishes featured. One of the prettiest dishes came from Merchant’s tent. Tuna and pickled watermelon crude — the very Italian cousin of sashimi, with cucumber, Greek cheese graviera (a cheese from Greece) and spiced pistachio topped with key lime aoli. Refreshing, salty, saucy. The only problem was that I was now in dire need of something to drink. 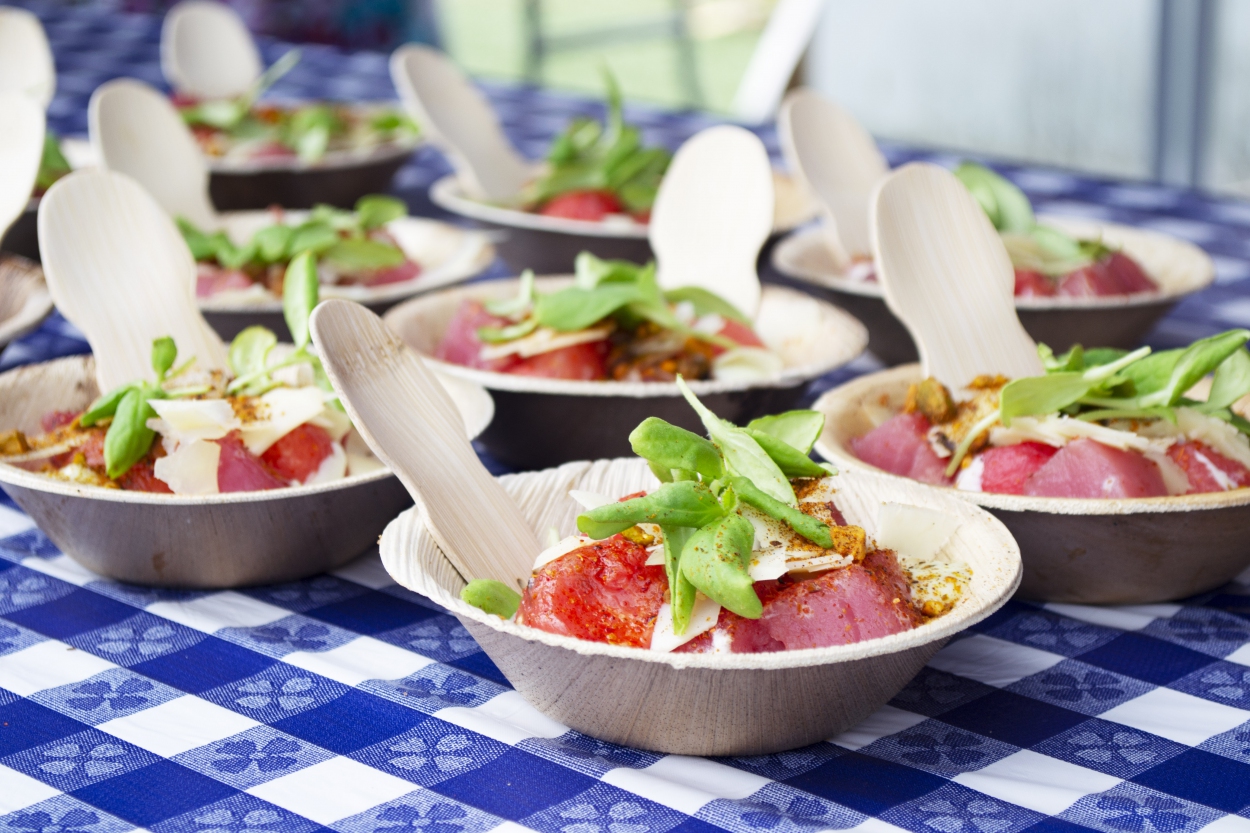 But as I was sippin’ away, two kids walked passed with lemonades that were bubbling and smoking. Some of the best use of dry ice I’ve ever seen. And it wasn’t just kids partaking in the magic dry ice lemonade. I had to keep from smiling seeing so many grown men with beards and tattoos enjoying bubbling juice through brightly colored straws. 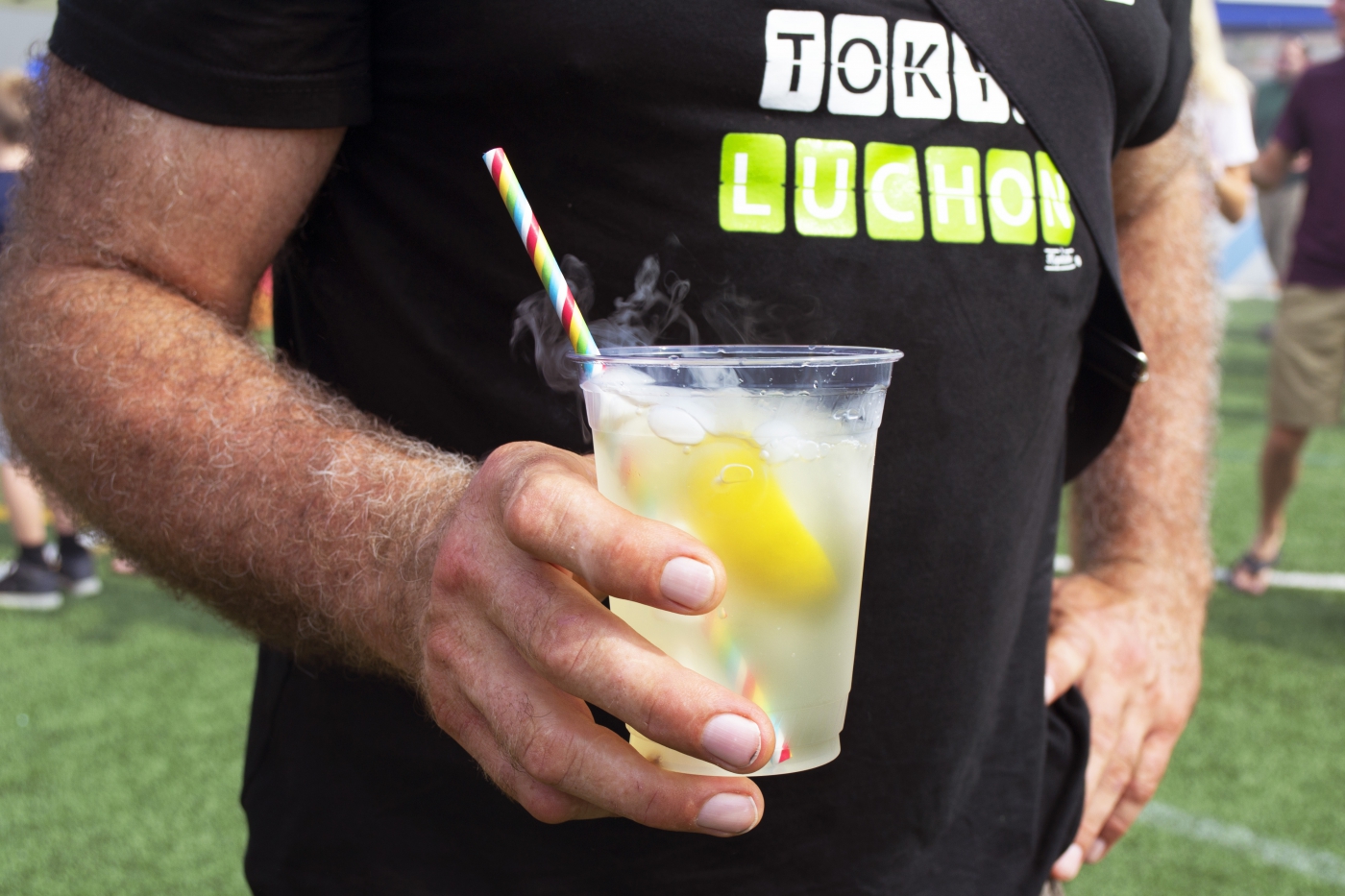 Sweets were within arms reach at all times. Dough Baby Bakery featured a chocolate glazed doughnut with marshmallow cream, graham crumbs (not crackers), tart cherry and a chocolate drizzle. Madison powerhouse L’Etoile offered two choices of ice cream on a sunny day. Vegans could partake between the two options. Whether it was the magic coffee ice cream with sweet cherries and candied cocoa nibs or the buttermilk ice cream with blueberry verbena compote (a naturally sweet plant) and amaretti crumble, your sweet tooth would be satisfied.

I grabbed a few more snacks, including another Bun Cha Gio from Ha Long Bay (Vietnamese rice vermicelli, with egg rolls doused in sauce) and parked myself in the midst of everyone soaking up the sun by the live band.

The “most delicious day of summer” could not have picked a better day.