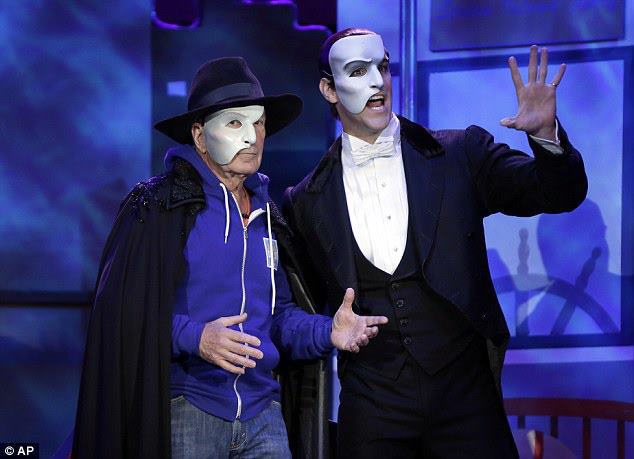 All of us grew up having a dream of some kind but for a lucky few, like Broadway star Jeremy Stolle, that dream becomes a reality.

Jeremy Stolle’s acting career began around age 16. He started doing high school musicals and realized that was what he was meant to do. He attended the University of California-Irvine on scholarship and soon after started to audition for professional theater companies.

“There is a moment when you realize this is what you want to do with your life, and that came pretty quickly after starting to do theater,” Stolle said.

His first big professional role was Gaston, in “Beauty and the Beast.” The production took place in Orlando, Florida for Disney. His career has come a very long way since then.

Stolle considers himself very lucky to have been able to keep a steady job in his field for the past 10 years with the “Phantom of the Opera.” He originally auditioned to play the Phantom for the touring company but was eventually moved up to the Broadway cast.

He described his 10 years at Phantom as “delightful.” He has been able to pursue projects and concerts and has always been able to return to his home at Phantom in New York. His producers have been flexible in letting him pursue other opportunities, which is often rare. There’s no complaints about any of the experiences throughout the years, Stolle said.

The albums of broadway performers and original cast recordings always had a huge influence on Stolle while he was growing up, and he always wanted to make one of his own.

“It’s always been a dream of mine to do a studio album,” Stolle said.

His latest album, In The Moment, is a collection of songs that Stolle discovered over the years, he said. The songs range from pop to, of course, musical theater that Stolle either has performed in a show or just loves to sing. The album is a highlight of the past 10 years, Stolle said.

He tends to sing big songs that require a wide vocal range. This is definitely obvious in his recent album. He noted that he has stuck to this because he has done well in concert with these songs and they’re what people like to hear.

Stolle will be in Madison on Nov. 2 to perform a cabaret act. This will take place at the Overture Center and will be a unique musical dining experience. People will be greeted with hors d’oeuvres in the lobby and then will move into the theater where they will enjoy a gourmet meal prepared by Chef Jason Egner of Catering a Fresco.

Arri Simon will join Stolle at the performance. He is a composer, actor, singer and piano player. Simon will be accompanying Stolle on the piano and providing backing vocals. The two will also duet and tell stories about their experiences in theater.

“We just really like to have fun and try to not take life so seriously,” Stolle said

The stories they will tell are very upbeat and centered around their happy and funny experiences.

The pair will also be performing an array of different musical numbers. They will be doing a song from the hit musical “Hamilton” as well as a song from up-and-coming artist Michael Mott.

“It’s going to be a touch of Broadway, a touch of storytelling and an invite into the world of a dreamer from California,” Stolle said.

Non-Broadway fans shouldn’t dismiss the show. The event will feature something for everyone. There will be radio songs and pop standards, and everyone should find the stories entertaining, Stolle said.

After his Madison show, Stolle will set out for a tour in China. He worked originally with a group called Bravo Michi, an opera band, but his promoter thought he had a lot to offer and asked if he would be interested in going out on his own.

“I started writing scripts and developing arrangements in my dressing room during Phantom,” Stolle said.

They sold the show as a tour and it was picked up by China’s promoter. It wasn’t necessarily planned, but it just ended up happening, Stolle said. He is excited to perform in a new location.

Stolle recognizes how lucky he is to have such a successful career. He had a hard time deciding his career highlight, but helping to develop “The Hunchback of Notre Dame” with Disney was his coolest opportunity yet. He was able to build a new musical with big names such as Alan Menken and Stephen Schwartz.

Jeremy Stolle is excited to share his show with the Madison community. He hopes it will be a glimpse into the world of Broadway for the public, and hopes to have fun while doing it.