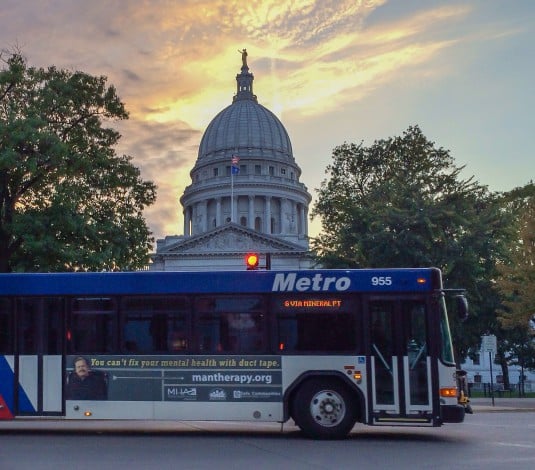 The new exhibition, “Art En Route,” brings together aspects of visual and literary art to create a community throughout Madison and surrounding areas. Put on by WUD Art, co-curators Yusi Liu and Alex Polach have brought a new dimension to Madison art.

Liu, former WUD art director, and Polach, former WUD art associate director of development, have been working on this project since September 2016. The exhibit will be displayed in Gallery 1308 of Union South until Nov. 17. In addition to the gallery, the art will also be displayed on Madison Metro Transit buses until Jan. 20, 2018.

Polach served as a great contributor to the inspiration of the exhibition. Over the summer, she was in Athens, Georgia when she discovered the exhibit, “You, Me and the Art,” where local architects and artists used bus shelters to display music-related art pieces.

From this, Polach believed WUD Art needed a “facelift,” and decided to dream big. Reaching out to Liu to co-curate the project, the two worked diligently to pull off an incredible and talented composition. 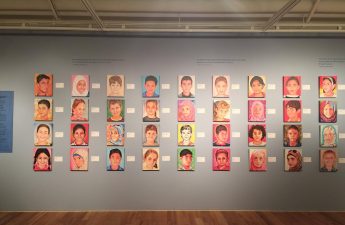 One of the most surprising aspects of the development of the project was the interest from aspirational artists. Receiving a total of 80 applications, 60 visual and 20 literary artists, Liu and Polach narrowed it down to a total of 16 contributors — 8 pairs of both a visual and literary artist.

“This combination [of literary and visual artists] is not just for the viewers, but for the artists themselves to enhance their practices,” Liu said.

All the artists have different levels of experience, even within the pairs, ranging from college students to adults with years under their belts.

While this varying levels of experience is something often seen in music, Polach said it is rarely seen in art.

Liu and Polach both agreed it was very interesting to watch everyone challenge themselves, whether it was using new software, different tools or different techniques.

Bringing the art to an ever-changing environment is also something not seen every day. The buses act as a “running gallery,” Liu said, who wanted to emphasize that seeing art on public transportation was aimed to take people “by surprise [and] experience art in a more casual and welcoming way.” 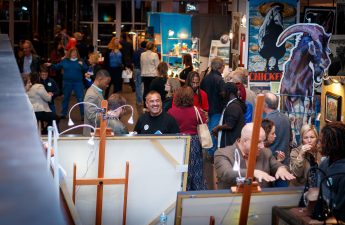 With the daily change of bus routes, Polach also highlighted the opportunity of total exposure being very wide, with an overall goal of reaching further than perhaps the typical Madison art population.

With a total of 16 buses circulating throughout the city and surrounding areas, each pair was given two buses to display their art on. With one “wrap” fitting on each bus, there is a great amount and variety of art traveling through the area.

Polach also brought up the fact that many of the individuals using public transportation are college students or those of a lower socioeconomic status. Thus, the curators hope this exhibition will bring citizens of the area together through art. Alongside that, encouraging the use of public transportation over personal vehicles will also showcase an environmental aspect.

There is no overall theme of the exhibition, Liu said, as there was were no specific theme or criteria given to the pairs.

As a result, this project has created a “playfulness” for the collaborating artists as each pair could collectively craft a personal and meaningful message.

One overall theme, however, naturally emerged within their creative processes.

“The identity of Dane County really does influence what [the artist’s] work has come to. A lot of it deals with personal identity and roles within the [Madison] community,” Polach said.

Depictions of the Women’s March and other sociopolitical issues were showcased throughout this exhibition as pairs represented their role within the community and issues they perceived to be most relevant. 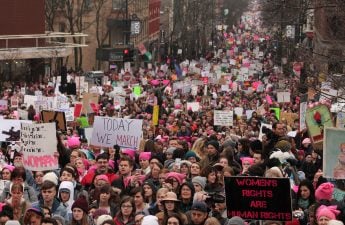 Furthermore, the curators hope to create a “scavenger hunt experience” for all viewers. Using the social media hashtag, “#ArtEnRoute,” Liu and Polach are encouraging viewers to take photos of the art on buses that is seen in the area for promotional and communal tactics. The campaign will be occurring on the platforms of Facebook, Twitter and Instagram.

This is also a good way to obtain content for the exhibition’s final catalog. Liu and Polach are planning to create a catalog at the end of the transportation aspect, combining both their own photos and those within the community. A production video is also being created with a videographer traveling around to capture the art. This will eventually be available on social media and the exhibit’s website.

Liu and Polach have learned a lot more than what it takes to put on an art exhibition, as the project encompassed so much more.

“Student-driven projects are very important and more people should dream big. There are so many opportunities for artistic projects in Madison,” Liu said.

This exhibition serves as a glimpse of the opportunities available in the Madison community — built through efforts by organizers like Liu and Polach.

Background on the artists, curators, WUD committee, community partners and grant writers can be found at the project’s website.