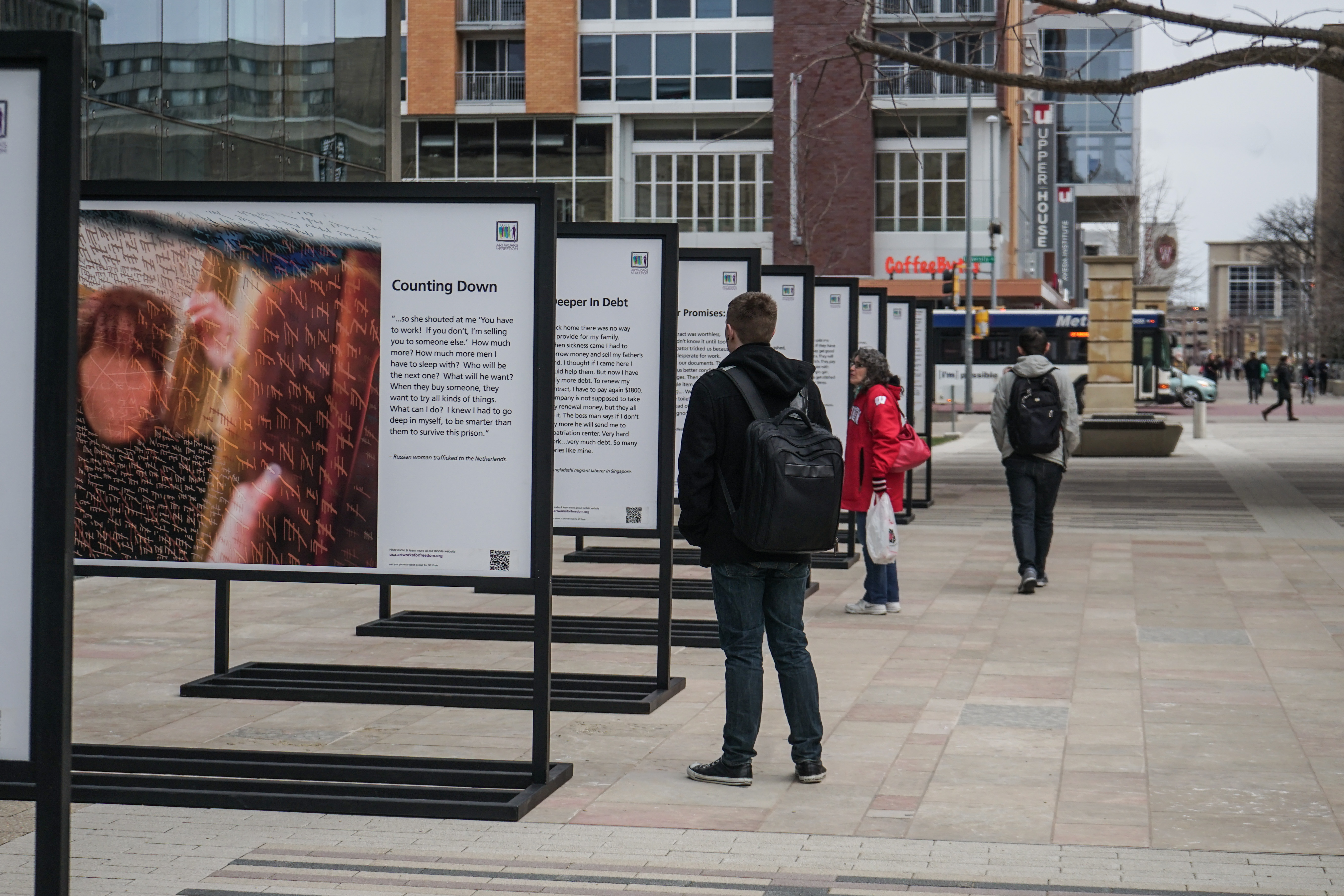 Students would not expect to see strikingly symbolic photographs and stories recounting experiences of trafficking victims while walking across East Campus Mall on a normal afternoon.

But this forced encounter is exactly what photographer Kay Chernush’s latest exhibit, Bought and Sold: Voices of Human Trafficking, sets out to accomplish.

The exhibit, hosted outside Chazen Museum of Art’s doors attracts pedestrians with its images that from a distance seem like they could be part of any art exhibition. They are diverse, both in content and colors.

One features a woman’s face surrounded by colorful superpositions, another a doll submerged in a tub of water with unidentifiable red objects.

But when the viewer approaches these alluring images, a closer look reveals their true nature. Each successfully conveys through symbols an aspect of human trafficking.

Chernush, however, is not content in letting her or the interpretations of her images do all the talking — each photograph is counterbalanced with a direct quote from the photograph’s inspiration, telling the audience their story.

This balance of symbolism and fact is a both an aesthetic and practical choice for Chernush. She was originally planning a documentary on the subject, but Chernush said she struggled to capture the reality of her subject’s situations without endangering many of them by including too much information.

As a result, she switched to the photography project. This now allows her to exhibit her bold artistry, but not her own interpretations, which may get in the way of important, factual stories.

Most of these images portray, quite stunningly, the trauma of trafficking victims on a global scale — but not all. One in particular talks about the strong resurgence of a former victim, whereas another depicts a sex tourist.

All in all, what is most impressive about this project is how it invades public space. Passersby are forced to confront an uncomfortable reality — that trafficking exists and happens on a global scale. It can affect everyone, but disproportionately affects women.

Locally, this exhibit beckons for more of its kind. Not necessarily ones for the sake of activism, but ones that invade the daily life and force people to think deeply and consider things they normally would not.