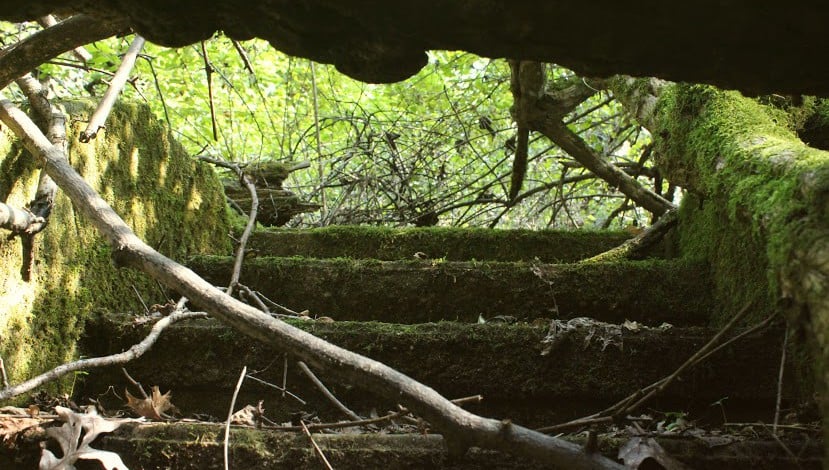 Editor’s note: An earlier version of this article erroneously said that the university had purchased the land of Lake Forest in 1947.

Entombed within the deepest reaches of the University of Wisconsin Arboretum, partially camouflaged in the underbrush, lies a concrete vestige of a housing development long forgotten: Madison’s “Lost City.”

Human constructions fight a constant battle against the elements, perpetually repelling the natural reclamation efforts of their surroundings. While most of our city remains firmly separate from the wilderness, there are fascinating forgotten spots that have been abandoned by humans, now fading into the forest.

With much curiosity and a little bushwacking, a brave Badger explorer can discover the nearby remains of this ruined neighborhood.

Lake Forest would have been an expansive suburban utopia, spearheaded by developer Chandler B. Chapman. With plans laid and construction beginning in the early 1900s, the 800-acre residential mecca promised a superior way of life —complete with street-car service, playgrounds, schools, gas and electric lines and a water supply rivaling that of Madison itself, according to the Lake Forester, a publication that ran from 1920 to 1922, issues of which can be found online via UW Digital Collections.

Much of the allure of Lake Forest stemmed from the planned balance between urban and natural features. Around 1,000 lots were initially planned, and about 7,000 “dwelling units,” with many situated on the edge of a pond or on the outskirts of a small forest preserve.

However, the lofty goals of Lake Forest were undermined by the land itself, which proved to be unable to support the weight of this new community. The moment roads were paved and concrete foundations erected, the grandeur of Lake Forest began to sink. The Lake Forest Land Company had originally planned to build 7,000 feet of canals through the community, which would lower the water table and create less marshy foundations for the homes. Without the full canal system, the first homes built were sucked into the bog around them.

Nearly 100 years later, all that remains of Lake Forest is the latent remains christened “the Lost City” by adventurous Madisonians. The university purchased or obtained much of the surrounding land by the late 1930s and embarked upon a series of conservation areas, yet left Lake Forest’s mossy remains untouched, ever fading back into the wilderness.

Setting out through the Martin Street entrance into the UW Arboretum, a curious explorer will note the solid concrete path underfoot. This is not a pathway constructed by the university, but a remnant of the main causeway of Lake Forest. This decaying path leads further into the woods, towards the heart of “Lost City Forest.”

The trail towards the ruins.
Nolan Ferlic

Following this trail is punishing. Low-hanging branches and underbrush grab at clothing and scratch at exposed skin. Slight hints of a faded civilization reward the intrepid journeyer — as the path leads to a clearing, an observant eye will distinguish a subtle inconsistency in the foliage. A ridge, however faint, runs northward. Inspecting this ridge confirms its incongruity with the natural landscape. Pushing away the dirt of this ridge exposes ancient cement — a sidewalk.

Remains of a sidewalk.
Nolan Ferlic

Cracked and crumbling, this road leads north into the stillness of the Arboretum. Following another nearby trail, rusted cans lay scattered about, decayed beyond recognition — another hint of this forgotten settlement.

Not far down this path, in an opening in the woods, the “Lost City” lies revealed before us, silent and solitary amongst the surrounding trees.

Of six original houses completed before the project was scrapped, only one can still be identified. Mossy steps leading up to empty sky stand before a decrepit basement foundation, its cellar barely distinguishable.

Bottles, rusted-out utensils and trinkets of a bygone past lay haphazardly around the concrete remains. Inspecting these abandoned items of daily life some hundred years ago, it’s easy to imagine the thriving suburban development that might have been. Looking into the woods one can picture the snaking rows of handsome identical homes lining a boulevard of this idyllic community.

Worn down after more than a century of neglect, the remains are barely observable through the foliage. The effort required to reach and discover these secluded ruins guarantees a rewarding end result, standing here amongst the remains. These common artifacts might not find themselves in a museum exhibit anytime soon, but the mystery and adventure involved in reaching Lake Forest is well worth the scene you’ll behold at the end.

Trekking to the Arboretum, an hour of searching, two hours of exploring and the many scratches and mosquito bites are a price I’d gladly pay for the elation of discovering this forgotten relic of yesteryear. It’s a wonderful experience, walking the ghostly streets of Madison’s “Lost City.”