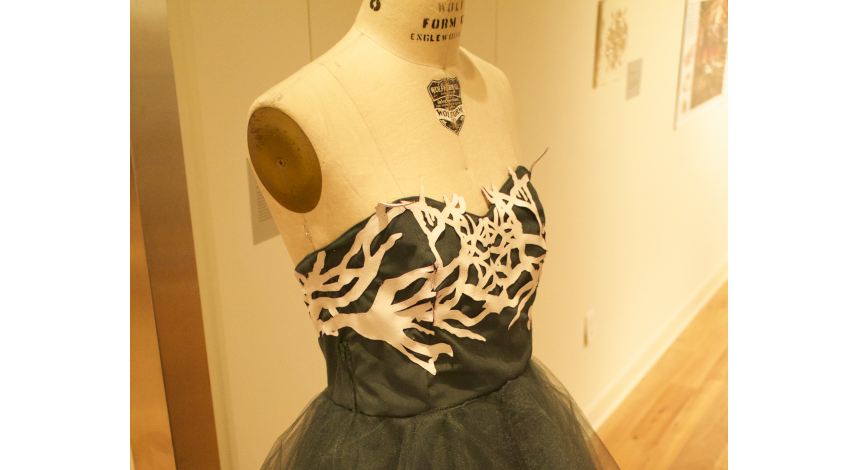 LIGHT IT UP, LIGHT IT UP
Elise Romas/The Badger Herald

When junior Catherine Finedore began designing her Nature Collection dress, Katniss Everdeen’s explosive “Girl on Fire” ensemble from “The Hunger Games” inspired her. Replicating a similarly entrancing effect would have been a difficult task if not for her engineering savvy and love for LED lights.

“Foundation level students are not judged beside graduate students, so everybody is judged in their own category, and we are therefore extenuating the breadth of the college experience,” academic curator Liese Pfeifer said.

This year, each submission came from either a design studies or landscape architecture course within the Department of Human Ecology. While every piece on display in the Juried Student Exhibition is course work that a vast array of design students creates, the judging was separated among the varying classes and experience of applicants.

One of the most unexpected designers is Finedore. As an biomedical engineering major she was supposedly an underdog for the prestigious exhibition, but her forest green gown was swiftly accepted.

The sleeveless fit-and-flare garment may have slipped between the cracks if not for Finedore’s electric touch: a skirt dotted with many tiny LED lights.

Finedore’s fascination with LEDs partially stemmed from her previous research with washable and reusable heart apnea monitors for underdeveloped countries. According to Finedore, this science-oriented approach translated very well to her garment for the Nature Collection.

But even after adopting easily accessible patterns, she was still faced with the laborious task of adhering the lights.

“The components I used were surface mount LEDs, which were very difficult to put on, because they are not meant for dresses, or are wearable electronics,” Finedore said.

It took about a month to incorporate the planning and sewing of everything, in addition to considering electronic effects. But Finedore took advantage of the unique technical qualities of her vision and used them to her advantage.

“Instead of wires, I used conductive threading, which is stainless steel, but [it’s treated] in a way that makes it [similar to] yarn or thread,” she said. “Because of the property of the seal, [it] has a little bit of a shine to it, and that’s a good aesthetic property to see on the outside.”

For Finedore’s dress, conductive threading is placed on the outside, not only to make it look better, but also to avoid a broken circuit.

If the conductive threading was placed on the inside, the touching of the different threads would disrupt the circuit. However, as a person in the dress walks, they kick it outward. This eliminates the fear of wires touching and disrupting the circuit that supplies electricity to the LEDs donning the garment, keeping them fully illuminated.

Even the circuit board correlates with Finedore’s nature theme. Known as the “lily pad,” it is tucked away between the tool in the small of the back.

The dress even has a rechargeable battery that is rejuvenated when plugged into the wall.

Despite any technical difficulties, Finedore said that it has been an honor to see her work next to so many other works of talented designers.

“I’m not actually a part of the design school so, as an engineer being in the gallery like this, it’s almost unheard of,” Finedore said. “It’s really exciting for me to be a part of it and actually have my pieces being displayed against people who are so good at what they do.”

After all of her hard work and execution, Finedore will be modeling this innovative, exhibition worthy piece at the Threads Pulse fashion show in May.

Finedore’s dress, as well as all of the other pieces of work, are on display for the Madison community.

“This is open to the public,” Pfeifer said. “We are student-focused, but our exhibitions are really an interest to everyone. All are welcome.”

The 2015 student exhibition concludes Thursday April 30 at 4 p.m., but gallery photos and explanations of the architectural and fashion designs are accessible online. Some of the garments, such as Catherine Finedore’s piece, can also be seen again at Nancy Nicholas hall at the Threads Pulse fashion show Saturday, May 9 at 2 p.m., 5 p.m. and 8 p.m.