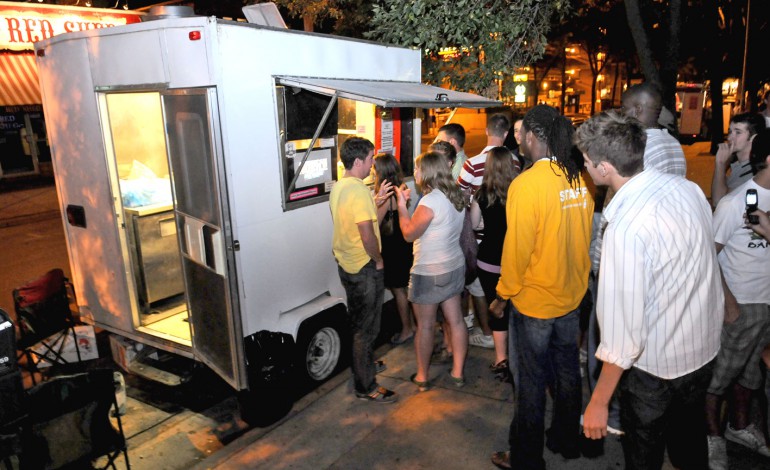 On any given weekend night there are three food carts parked
along the 400 block of North Frances Street, each hoping for the attention of
UW’s ravenous bar-time crowd. Despite the variety of late-night cuisine that
can be found on this little strip of street, only one of these carts almost
always has a line.

And it’s not just any line. Because of how long it grows and
how sluggish it progresses, it can be compared to the lines endured at the DMV.
But the dedication to this particular venue is overwhelming, as many students
wait more than 20 minutes just to reach the front window of the small, white
cart.

This is Jin’s Chicken and Fish, and it is arguably Madison’s
most popular late-night street food venue.

Jin’s menu is decidedly simple. You may order one of two
items: One is a chicken sandwich, and the other is a catfish sandwich. The
catfish and chicken strips are deep fried and placed on a standard white
hamburger bun, then topped with iceberg lettuce and completed with Jin’s
signature combination of a tantalizing mix of cool mayo and fiery hot sauce.
The sandwich is wrapped in tinfoil and handed to you with a napkin. Both cost
$5. Jin’s also offers a basic sampling of sodas or bottled water for a minimal
fee, but this part of the menu is often forgotten.

It’s not hard to deduce why Jin’s is so popular. For
starters, the food is perfect for what an overly intoxicated college student
might crave at 2 a.m.: something hot, fried, simple and in a very convenient
location — in close proximity to 10 of the campus area’s bars and clubs. However,
it’s not only excellent drunk food. This is a classic sandwich that is just as
mouthwateringly tasty for sober all-night studiers or anyone who has an empty
stomach.

Since its inception in 1992, Jin’s has been managed by
Jeffrey Okafo and his girlfriend Kelli. The name “Jin” is actually an acronym
for Jeff and his two brothers, Ivan and Nick, although in its 16 years of
business, it is still a common misconception to refer to Jeff, the tall man
making sandwiches, as Jin.

The next time you’re wandering past North Frances Street
late at night, you’ll undoubtedly catch a hint of the tempting aroma of Jin’s
Chicken and Fish. You might try the fish sandwich for a lighter snack, but the
chicken is still equal to the fish in taste and satisfaction. Either choice is
a win, as Jin’s Chicken and Fish has served late-night partiers for years with
abundant success.

As of press time, the
future of Jin’s Chicken and Fish was uncertain. A City Council meeting is scheduled
for Sept. 2 to address a possible six-month vending license probation due to a
slew of violations, including 29 parking tickets and a tussle with a Madison
police officer.

One cannot expect street vendors to be consistent, let
alone reliable, and this cannot be any truer of Sabores Latinos.

This medium-sized, candy apple green food cart can be
found between about the hours of midnight and 3 a.m. during the weekend at the
junction of State and North Broom streets. That is, of course, if it decides to
be there. It is unclear what precise nights of the weekend the cart will show,
as, for example, sometimes it is open from Thursday through Saturday, while
other weeks just on Friday, or perhaps one week it will choose to open on a
Tuesday, and Tuesday alone. There is no rhyme — and certainly no reason — behind
this cart’s hours of operation.

Unfortunately, and I say unfortunately because of the cart’s
El Dorado-like mystery and the
difficulty in finding it, Sabores Latinos happens to offer some of the best
Mexican food this city has to offer in the middle of the night.

The menu consists of items typical of a small Mexican
restaurant, which is fitting since the cart is owned by Antojitos El Toril, a
small eatery located on Cottage Grove Road. Like most things one can buy from a
late-night food cart, all of these items cost $5.

The burrito is stuffed near to explosion with rice, beans
and your choice of chicken, pork or beef. It is large, messy and easily
filling. The tacos are very basic and perhaps, for that reason, a bit forgettable,
with just meat (your choice of chicken, pork or beef) and lettuce stuffed in
three shells and served with a picante salsa. For the tortas — a traditional
Mexican sandwich loaded with meat and veggies — you can choose from steak, beef
or chicken.

By far the best item is the quesadilla. This dish comes
with rice, beans and a unique salad of iceberg lettuce and sour cream. What
makes the quesadilla so wonderful is its warm, flaky tortilla stuffed with
meat. This is superb with the chicken, which is delightfully juicy and
delectably tender.

If you’re craving this chicken quesadilla on weekdays,
which is an entirely possible occurrence once you’ve tasted it, the Sabores
Latinos cart is sometimes open on Library Mall. But just like the cart’s elusive
late-night “schedule,” these afternoon hours are equally sporadic.

Still, after all the trouble it can be to hunt down
the cart just hoping it will be open, the first-rate cooking makes the effort worthwhile.

It’s rare for a food cart to make its way into the society gossip columns of The New
York Post’s famed Page Six. But Insomnia Cookies isn’t really a food cart. It’s more
like a food bus, and the chain’s cookies have already made this late-night locale the stuff of legend on the University of Wisconsin campus since April.

Insomnia Cookies is the brainchild of Seth Berkowitz, who, in his junior year
at the University of Pennsylvania, stepped into the kitchen for the first time
and began developing the cookies recipes that would result in a rapidly growing
empire. Already, Insomnia Cookies has delivery and walk-up locations at 18
university campuses across the nation with two more being added to the roster
in the coming weeks. Success like this has landed Berkowitz on Inc.com’s list
of 30 Entrepreneurs Under 30.

And for good reason. The cookies found at Insomnia Cookies are perfectly crispy
on the outside and chewy on the inside, and the best part is the cookies are
always served warm. Aside from texture, these cookies are downright delicious,
although many of the flavors (chocolate chip, white chocolate macadamia nut,
oatmeal raisin, etc.) are a bit standard. Still, a recent visit to the Library
Mall location of Insomnia Cookies (the food cart also parks itself on Frances
Street near the Red Shed on the weekends) revealed that this stop can even make
a tried-and-true standard into a delicious treat.

However, those searching for something beyond the chip can indulge in one of
Insomnia Cookies’ cookiewiches — a cookie and ice cream sandwich — or perhaps a
brownie sundae with one free topping (choices include chocolate mint, cookie
dough and walnut among others), but these are slightly more complicated to
devour while walking (especially when inebriated). The chain’s peanut butter
chocolate deluxe cookie — a peanut butter cookie with a peanut butter cup baked
into the middle — are more decadent than the traditional cookie flavors and may
solve the slight consumption problem associated with the cookiewich or sundae.

But best of all are Insomnia Cookies’ prices: One cookie costs only $1, and the
purchase of a second cookie means a third is free. Naturally, cookiewiches and
brownie sundaes (toppings after the first are $.25 more) are a bit pricier, costing
$3.50 or $4, respectively. All of these prices are pretty gentle on a wallet
that may have just been emptied buying drinks at the bars.

But such a myth is unfounded with Big Red’s Steaks, another of Madison’s
late-night mobile eateries. This cart — founded by three Philadelphia natives —
aims to dispel this rumor by bringing a genuine Philly cheesesteak about 900
miles from the location of its inception to the city of Madison.

A traditional Philly cheesesteak isn’t complicated to compile. Thin slices of
steak are grilled and piled atop a long, thin bun, although the authentic bread
for a Philly cheesesteak is an Italian roll only found in Philadelphia. Cheez
Whiz, which was not added to the sandwich until 22 years after its creation, is
then ladled or dispersed on top. Most cheesesteak vendors allow patrons to add
fried onions, green peppers or mushrooms to their sandwiches.

Big Red’s Steaks seems to follow all of these somewhat sacred rules when it
comes to crafting their sandwiches. The steak is flipped and chopped on the
cart’s surprisingly large flattop grill, and it’s cooked until the meat is
tender. Patrons are then forced to choose the type of cheese (Cheez Whiz,
American or provolone) and whether to include fried onions, banana peppers or
mushrooms.

After these tough decisions, the cheesesteak is handed over, carefully wrapped
in wax paper. The end result is delicious and greasy, though the steak itself
lacks a significant amount of flavor. But the banana peppers — a welcome
contrast to the typical green peppers frequently offered instead — make up for
this, if only slightly. Although the American cheese, mushrooms and fried
onions (in Philadelphia, this would be ordered as “a pepper American wit”) may
not be traditional, Big Red’s Steaks still crafts a satisfying sandwich,
especially for post-bar time fare.

Aside from their cheesesteaks, the best part of Big Red’s Steaks is its prime
location, nestled just off State Street near Jin’s Chicken and Fish on Frances
Street. But, don’t worry, even if the Plaza’s Thursday night $2 Long Island
iced tea special disorients you, Big Red’s is hard to miss. The food cart is
big. And red.