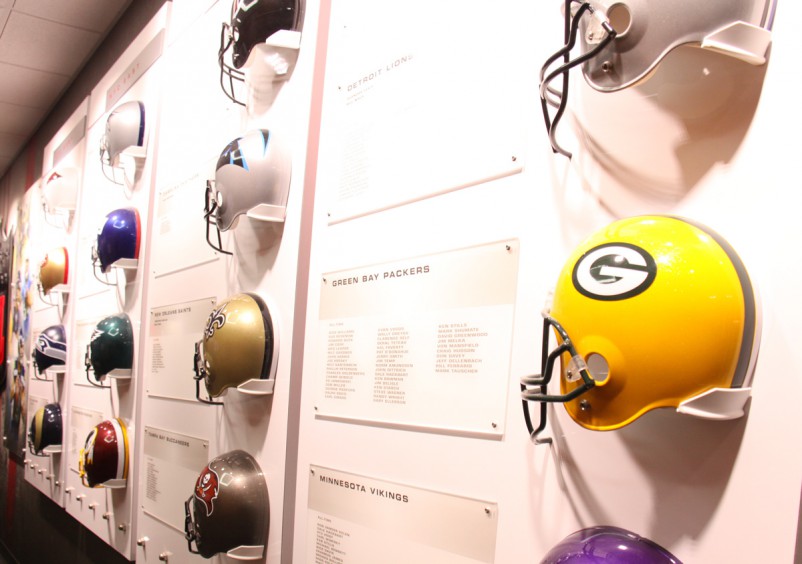 In all of 10 paces, one can catch a glimpse into both the past and future of Wisconsin football. Step down the well-trodden, faded green turf of the tunnel running alongside the nondescript McClain Center, turn right and you now stand on fresh gray carpeting, the walls lined with colorful glass plaques and life-size pictures of a game day stadium blanketed in a sea of red. That tunnel is like a time machine, shifting you between two distant eras of Wisconsin athletics.

Completed in 1988, the Dave McClain Athletic Center shows clear signs of its 25-year-old age, a reminder that the Camp Randall facilities for UW student-athletes have seen limited change since their initial construction. But under that outdated practice field lies the freshly-unwrapped gifts of an $86 million renovation project, with $37 million of it funded by gifts to the Athletic Department and the rest covered by state-issued bonds.

The three-phase project to construct the University of Wisconsin Student-Athlete Performance Center (SAPC) is one of the athletic department’s most ambitious projects in recent memory. Construction began after the Wisconsin football team made its second straight Rose Bowl run in the fall of 2011. By December 2012, the university had completed the first two phases of the renovation.

That opening passageway under the McClain Center is lined with wood paneling, photographs of Badger greats and other tributes to Wisconsin football – the first obvious signs of change. Yet this is just the eye candy for what lies beyond the hallways and doorways peeking around every corner.

Among the additions and renovations beneath Camp Randall: a spacious new football locker room, new locker rooms for the men’s and women’s soccer, track and cross country teams; two bigger and better-equipped weight rooms (one primarily for the football team, another for non-revenue athletes); and an expansive, state-of-the-art athletic training and sports medicine facility.

These are the out-of-sight machines that quietly keep the Wisconsin athletic program churning, and they just received a major facelift.

The finishing touches complete, they walked through the corridors showcasing All-Americans and national award winners who had donned the cardinal and white. Upon swinging open the locker room doors, their eyes fell upon an entrance flanked on either side by oversized glass cases holding two rivalry trophies – Paul Bunyan’s Axe (Minnesota) and the Heartland Trophy (Iowa). Beyond that sits a cavernous locker room, lined with roomy, dark wood lockers and with a massive motion ‘W’ painted across the floor.

While they had used this locker room on gamedays in 2012 when it was still under construction, players temporarily shared a handful of the much smaller locker rooms, designed for non-revenue sports, for practices and fall camp. The new setup was a far departure from those cramped quarters.

“We were just wowed,” senior linebacker Chris Borland said of his first impression. “We came down through the ramp and the first thing you see is the NFL board and there’s so much color and I think it looks great. It speaks volumes about the guys that have been here in the past. It just wows you at first sight.

“It was cool to see, especially for the older guys, having seen what this space used to look like and then what it looks like today. It’s pretty impressive.”

Adjacent to that locker room is the players’ lounge – something the team never had before – with ping pong and pool tables and no shortage of love seats and couches to kick back and stare at walls lined with televisions. It may best be described as a childhood rec room recast for the college student, a place to build off-the-field camaraderie between teammates away from the competitive juices of the practice field and locker room.

For all the additions of this mass renovation, this was the quickest sell for players. Like proud first-time homeowners, they welcomed the quarters with wide smiles and the rewarding sense that the wait was worthwhile.

“They’re excited to be going into these brand new facilities and being quite honestly the first ones to break them in,” said Jason King, UW’s associate athletic director for capital projects and operations. “It’s like when you buy a new house. When you move in, it’s pretty cool. They’re all getting to move into their new house right now.”

If the locker room is the football team’s place of residence, then the weight room is the office where the daily, grueling work resumes.

Pictures of Ron Dayne, JJ Watt and Russell Wilson descend from the ceiling above rows of red benches and machines that still have a fresh sparkle. It is nearly triple the size of the old football weight room, King said, the type of space needed to accommodate a roster of almost 100 players. The proposal for the SAPC under Gov. Jim Doyle’s 2011-13 capital budget even noted the number of athletes using these facilities had “more than tripled” since the original weight room was built.

Through another set of doors sits what might be the most easily overlooked yet most critical piece of the $86 million face lift – the sports medicine and athletic training facilities. That same proposal called the previous sports medicine area “technologically outdated and too small.”

Post-renovation, training tables line the room, rehabilitation pools are within view and physician’s offices, X-ray rooms and dozens of other gadgets fill the space. It is where not only football players but most Badger student-athletes come for all of their injury treatment.

It is no mere coincidence that after strolling down the McClain Center hallway, one’s eyes are immediately drawn to a wall lined with mini NFL helmets listing the current and retired Badger football alum to suit up for professional teams. Alongside them are panels with sharp white lettering listing former Wisconsin players who played in Pro Bowls and Super Bowls.

These are the visual displays that grab the attention of 17-year-old recruits being courted by a long list of elite college football programs. Each dreams of their own professional career and envisions their own name on these very lists, and Wisconsin knows how to target its audience.

“It’s a game-changer to have kids see guys in the NFL and see some of the things that guys have done, been All-Americans, national award winners,” Hammock said. “That’s something that definitely piques recruits’ interest.”

Hammock admitted that while academics and a winning tradition are key pieces of consideration for recruits, he lost some recruiting battles to those enamored by a massive weight room or a fully stocked player’s lounge that Wisconsin could not offer. The flash of a school’s facilities are far from the most accurate method for determining how well a player fits into a particular program, but such is the nature of working with teens on the recruiting circuit.

“Unfortunately, I think 17, 16-year-old kids don’t really respect what truly goes into being a good football player at the college level,” Borland said. “But they will be impressed with the sights and sounds of game day, locker room lounge, things like that.”

When describing the old facilities, players and coaches resort to terms like “functional” and “dated.” They are quick to point out that the underwhelming spaces did not hamper the success of a football team that has won its conference’s crown each of the last three years.

But ESPN blogger Adam Rittenberg ranked Wisconsin’s football facilities second-worst in the Big Ten last summer, ahead of only Northwestern. In the words of senior running back James White, the outdated weight room and locker room “probably didn’t compare to most top-notch Division I schools.”

While bigger and better has become the guiding principle in an endless effort to outshine the facilities of rival schools, there was universal agreement that the time had come for change.

“I definitely think anytime you have a renovation project there’s normally a reason why,” Hammock said.

There was no one moment where the school realized it needed to make major renovations to maintain its position in the college sports landscape, according to Associate Athletic Director for External Relations Justin Doherty, who has worked in the Wisconsin Athletic Department since 1994. But as Athletic Department officials traveled around the country with Badger teams, they were always sure to tour the facilities at other schools. Working in stops at Alabama – home to some of the nation’s most stunning football facilities – and a host of Big Ten schools, the University gradually realized the need for and shaped a vision for its own renovations.

“I think really more it’s you take some ideas from various places, you come back and you say, ‘We want x, y and z,’ and then it’s like you’re going to go build a house,” Doherty explained. ” … It’s just a constant give-and-take until you come up with a plan that everyone’s satisfied with and that fits within your budget but that also serves your need.”

About 15 years ago, the Athletic Department started drawing up plans for the fan-oriented renovations at Camp Randall completed in 2005. That $109 million project increased the stadium’s capacity by more than 4,000 seats and added restrooms, luxury suites and other fan amenities. So this project, targeting the athletes themselves, was the next logical step.

In Doherty’s eyes, the expensive upgrades are necessary for the same reason the university built Union South and Dejope Hall for the greater student population – to attract top students from around the country.

“Ultimately, you want people to come to school here and specific to us we want the best student-athletes to come here and compete,” Doherty said. “That’s really what it’s about, and I think we tried to be prudent with what we did. But you’re also trying to do something that has some pop and that turns somebody’s head a little bit too.”

The lone phase that remains unfinished is an expansion of the north end of Camp Randall, where an updated, 30,000 square-foot Fetzer Academic Center is slated to open in January 2014. With a staff of more than 100 part-time tutors to serve Wisconsin’s 750 student-athletes, the Fetzer Center is an addition easily lost in the glitz of weight rooms, trophy displays and plaques commemorating the football team’s Big Ten titles.

“There’s always a pressure to continue to upgrade, and we will always try to stay on the leading edge of that so we can maintain and continue to better our student-athletes and our facilities,” King said.

Part of that final phase includes a new LED video board and sound system, changes that will be visible to more than just those inside the program.

This entire project comes at a fitting moment for a program that has an entirely new coaching staff, one that has already begun to reshape the culture of Wisconsin football. Gary Andersen’s arrival was the apex of such change, expectations soaring with an experienced roster and, now, facilities that can hold ground against Wisconsin’s peers on the recruiting trail.

“It’s really a tribute to [the players] and the success they’ve had,” Hammock said. “Obviously, they’re a big part of why things are changing and why things will continue to get better.”

In a way, this whole renovation is further evidence of the rising brand of Wisconsin football. Without the winning seasons, the support might never materialize for a multi-million dollar renovation of their home base.

To put it simply, the pressure is on.

“If they’re going to put money into it like this we have to go and perform, show up and play each and every week,” White said.