The 2018 midterm elections brought several changes to Wisconsin government — new Democrats in office, lame duck legislation — the list goes on. With the change in attorney general came a change in the Department of Justice’s procedure that will usher in a new era of government transparency.

In August 2018, DOJ employees received an email instructing them to sign a nondisclosure agreement. The agreement applied to full-time employees, limited term employees, contractors, interns, externs and law enforcement partners and prohibited employees from revealing any confidential information about their work during their time in office and after they leave the state.

This email was sent on the same day former Corrections Secretary Ed Wall released his book, “Unethical: Life in Scott Walker’s Cabinet and the Dirty Side of Politics,” a tell-all critical of Schimel’s response to abuse allegations at Lincoln Hills School for Boys. Wall was a top criminal investigator for the department until he was fired in 2016 for telling an aide of former Gov. Walker to destroy a document. Wall said the incident was misinterpreted. Whether or not Wall is the best judge on government transparency notwithstanding, the timing of this development paints Schimel’s DOJ in a poor light. 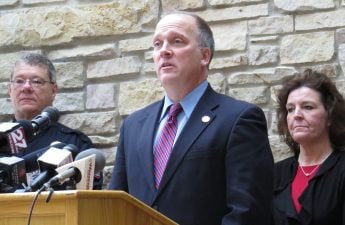 Let’s be clear — nondisclosure agreements are effective and appropriate in certain contexts. Maybe a celebrity wants to keep elements of her personal life private. Maybe the head of a startup company wants to protect her ideas from being stolen. These are private contracts, so though it seems suspect, secrecy is not a completely unreasonable request. The problem occurs when the secrets are a matter of public concern.

The actions of a government agency should be at the height of public concern. They are funded by public tax dollars — there should be full transparency, minus any confidential information.

The DOJ defended the practice by reiterating that their employees regularly come in contact with sensitive and confidential material. But there are multiple statutes that prohibit DOJ employees from releasing such information, which renders the purpose of a nondisclosure agreement moot.

Statutory law and the First Amendment both make nondisclosure agreements in government agencies a nonstarter. So why have them?

In a state that is already known for subverting democracy through lame duck legislation and limiting the voice of its voters through partisan gerrymandering, it is no surprise a Republican DOJ would embrace such a practice.

Wisconsin is fortunate Kaul sees reason and understands that the ethical rules and DOJ policies already in place protect confidential information from being shared. Further safeguards are unnecessary and encourage more harm than good. Wisconsin deserves a fully transparent government, and removing nondisclosure agreements from the DOJ is an excellent start.