In a statement released today by Rhodes-Conway, the Madison mayor defended the budget choices regarding the total increase in funding for MPD.

While Rhodes-Conway’s budget cut nearly $2 million from the police department’s general fund — the largest expenditure cut to the police budget in at least 10 years — the total budget for police rose.

“When building the budget I have the most discretion over how the City’s general fund is allocated,” Rhodes-Conway said in the statement. “My cuts included moving staff out of MPD and into other departments, and requires further spending cuts.”

Rhodes-Conway’s budget increased total spending for the Madison Police Department by 3.2% to $88.4 million, despite citywide protests to defund the police over the past months. 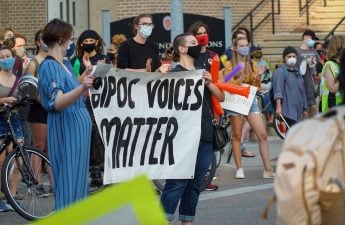 Rhodes-Conway said in the statement the total budget increase is due to rising health care and pension costs. Additionally, a multi-year contract made under the past administration includes a 3.75% raise in 2021 for the police department, which Rhodes-Conway said is no longer affordable.

Since May, Rhodes-Conway said she has been calling on the police union to reopen their contract, but they have declined so far. Regardless of the union’s response, the $2 million will be cut from the general fund.

Rhodes-Conway recognized the cuts made to the general fund were “more modest” than some community leaders and campus activists have called for. Rhodes-Conway said she made these decisions because of increasing gun violence in the community and the growing population and region under MPD jurisdiction.

Rhodes-Conway also said she did not make more drastic cuts because she did not want to put people out of work in the current economy.

“This work of reimagining public safety will continue, and I expect that we will find more ways to shift responsibility from the police department to other types of response,” Rhodes-Conway said in the statement.

The community will have the opportunity to respond to the budget publicly before it is amended and approved by the Madison City Council in November.