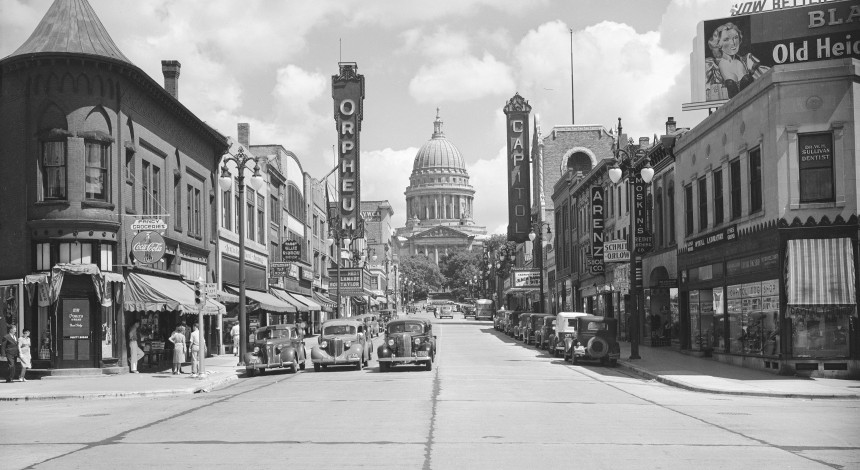 State Street in 1939
Courtesy of the Wisconsin Historical Society

State Street’s stores and restaurants have come and gone over the past 50 years to meet the challenge of an evolving campus community of incoming freshmen and graduating seniors.

State Street, an instrumental part of campus culture that connects the University of Wisconsin to the Capitol building, continues to evolve, reflecting the demographic groups present in Madison and national trends.

The history of State Street

One of the most dramatic changes to State Street occurred in the 1970s and took place over a multi-year span when, through an initiative led by Mayor Paul Soglin, State Street transitioned from allowing motor vehicles into a pedestrian and transit mall, Ald. Mike Verveer, District 4, said.

“The first part was blocking off [Library Mall] to motor vehicles and [seeing] how that improved the area and pedestrian experience to students and faculty and staff on campus,” Verveer said. “It was considered a success but [was] controversial at the time.”

In the 1970s, converting streets into pedestrian and transit malls was a “popular notion” and was encouraged by the federal government through grants, Verveer said. Few transit malls still exist today because most of them weren’t considered successful, he said.

Madison continues to receive grant money from the Federal Transit Administration for every mile of metro buses that travel a fixed path, Verveer said. In upcoming years, the city plans to study the effects of removing some, or all, metro buses from State Street, but will have to consider how much federal funding could be lost, he said.

The University Bookstore, which opened in 1894, is one of the oldest businesses still open on State Street today and has called it home for more than 120 years, Pat McGowan, bookstore president, said.

The University Bookstore in 1948
Courtesy of UW Bookstore

It continues to do well because they are a local bookstore as well as a destination fan shop, making it a destination for both locals and visitors, Erin Lambert, bookstore marketing supervisor, said.

“I think it is important to have a variety of businesses on State Street, including restaurants, bars, coffee shops and retail stores,” Lambert said. “Having a diverse assortment of businesses helps draw people downtown.”

More people eat out and purchase prepared food today than they have in the past, Mary Carbine, business improvement district executive director, said.

This trend has been steadily growing for decades across the United States and is reflected in Madison and on State Street, she said.

“What we are seeing in downtown Madison is very much inline with national trends in terms of downtown and neighborhood business districts,” Carbine said. “These things reflect the market and the customers and we see businesses in downtown Madison evolving in response to the way that people shop and live.”

The largest demographic groups nationally are young professionals in their twenties or thirties, and baby boomers, who might be empty nesters choosing to downsize and return to a downtown apartment for the different amenities including restaurants, entertainment and shopping, Carbine said.

These trends are also reflected in Madison and shape the market and customer base for downtown businesses, she said.

“When we look at demographics, the big demographic factors in downtown Madison, of course we have the strong UW student population that drives a lot of the way businesses operate and think,” Carbine said.

Madison is shifting toward an increase in restaurants and places for dining and socializing, and an increase in the number of service type businesses, such as health, fitness, banks and salons, she said.

Heavy demand for apartments in Madison, particularly in downtown, is driving increases in apartment supply, Carbine said. The increase in density of residents is certainly going to drive the business mix in downtown Madison, she said.

Neighborhood serving retail and services will increase along with restaurants in response to the increase in new residents, Carbine said.

“I think we are going to see over the next two years a lot of evolution in businesses,” she said.

High-rise housing developments, such as the Hub, the Domain, City View and Ovation 309, have been on the rise lately, and it doesn’t end there. There are plans in the works for Hub II, a 12-story, 1,000 bed upscale student housing property on University Avenue. 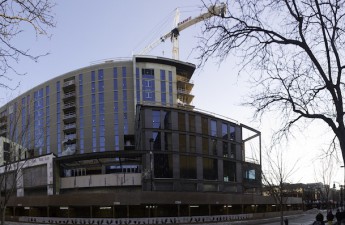 Plans for second Hub to go up downtownFollowing the construction of State Street’s Hub, a similar housing project from the same company, Core Campus, is in its Read…

“Some already feel there is a canyon, with all the new buildings on Gorham and Johnson and University Avenue, and this will just add to that,” Verveer said in a previous interview with The Badger Herald. “This is a very large building in height and mass. Over the years, people have mentioned they don’t appreciate all the buildings [downtown], but the city, they’ve had a policy for many years to keep tall buildings generally in one area.”

Almost all of the Hub retail spaces have been leased and new businesses will be opening there in August, Verveer said. These businesses include a Colectivo Coffee, a clothing store, a salon and several out-of-state restaurants coming to Madison and making it their first Wisconsin establishment, he said.

“The Hub has really changed the landscape,” Verveer said. “It helps that the Hub has ended up becoming woven into the fabric of State Street.”

Come fall, Verveer said he does not expect students to find very many vacant storefronts on State Street.

“Overall things are very healthy and I believe that will continue to be the case,” Verveer said. “I am confident that State Street will continue to cater to both students and non-students alike and all the varieties of demographics.”

Twenty years ago there was a balance between retail and dining, Soglin said. Because State Street has become popular as a food and beverage destination, Madison has become a “victim of [its] own success,” he said.

Rent on State Street is becoming more expensive and traditional retailers cannot afford these high prices, Soglin said. If this increase in rent continues, even existing retailers are going to find it difficult to survive, he said.

“The two biggest changes, and they represent the two biggest challenges for us right now, are the presence of more and more homeless people in the area and secondly, the changing mix of retail on State Street,” Soglin said. “We are getting more and more bars and restaurants and taverns, which is forcing out the traditional retail.”

UW students’ expectations for State Street have changed over the years in part because most students are only in Madison for four years and are just getting a snapshot of what State Street is, Ald. Zach Wood, District 8, said.

Most sophomores and juniors in college have no recollection of a time where there were fewer bars on State Street so they just assume that is what State Street has always been, Wood said.

“I think that it is important that we continue to work both with the local community, local residents and local businesses to try to figure out how to best move forward with State Street,” Wood said. “I do not think anyone would tell you they would like the street to be entirely restaurants and bars.”