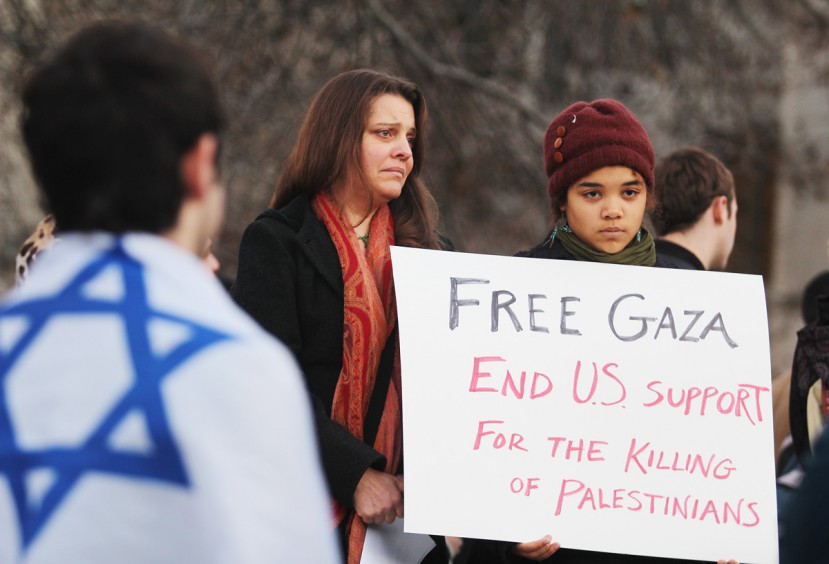 An Israel supporter looks on as a woman holds a sign in support of Palestine. The two rallies were held concurrently in 2012, with little to no dialogue or debate exchanged between the two.
Andy Fate/The Badger Herald

Two lectures scheduled at the same time Thursday have given rise to a passive debate between student groups on campus on Israeli-Palestinian conflicts.

The University of Wisconsin Hillel and Students for Justice in Palestine each hosted different events focusing on anti-Semitism at 7 p.m. giving rise to some drama on campus, yet neither group reached out directly to the other to address concerns.

The UW Hillel, a center serving Jewish life on campus hosted Deborah Lipstadt for a talk on anti-Semitism and the Students for Justice in Palestine, a pro-Palestine student organization, hosted Norman Finkelstein for a talk on the Israeli-Palestinian conflict.

The day before the two simultaneous events, student organizations Badgers for Israel and the Madison Israel Club put out a joint statement urging students to avoid the SJP-sponsored Finkelstein event and to instead attend the Lipstadt event. 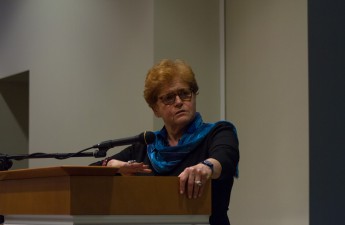 The statement said while they respected the free speech protections that allow Finkelstein to speak on campus, they did not support his views or respect his authority on the issue. Finkelstein, who is Jewish and a child of Holocaust survivors, has been an outspoken critic of Israel and open about his support for the Palestinian cause.

Representatives from the Madison Israel Club declined interview requests. In a brief email, the Badgers for Israel president Lila Greenberg said the statement stood for itself and the group is always concerned about anti-Israel activity on campus.

The director of Wisconsin Union Directorate’s Society and Politics, Jack Comeau, said he received four emails that expressed concern the marketing email for the Finkelstein event did not disclose Finkelstein’s bias, and that if people attended the event thinking it would be objective they would be misled. He said there were concerns not disclosing the bias would prove dangerous to Jewish students’ safety.

Comeau said he met with the communications director of Hillel, as well as leaders of the Badgers for Israel and Madison Israel Club, who reached out to him based on some concerns they had received from the Jewish student community. Comeau agreed to change some of the marketing points surrounding the SJP event and to disclose that Finkelstein is a strong advocate for Palestine.

Comeau said WUD tries to portray both sides of the issue. Last weekend they co-sponsored an event with Badgers for Israel and last semester they hosted another event with Madison Israel Club, both featuring pro-Israel speakers. Students had not contacted him with any concerns surrounding those events, he said. 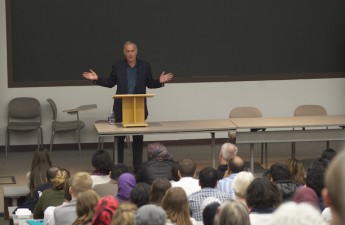 Representatives from Students for Justice in Palestine said they were disappointed with the statement released by the two pro-Israel groups and thought it was handled poorly.

“They clearly reached out to every other outlet except us as the organizers of the event,” SJP representative Hani Rustom said. “We would have liked to speak about any concerns they had personally as opposed to going through mediators such as WUD and social media outlets and have a discussion on it.”

SJP representatives said they sought to bring as qualified a speaker as possible. Khalid Abdl-Haleem, a representative, emphasized that Finkelstein did not represent SJP’s views, but that the goal was simply to promote dialogue from a viewpoint not commonly heard.

Hillel director Greg Steinberger said the event scheduling was coincidental and said there was no need to compare the events.

“All sorts of other things are happening at the same time and that’s the benefits of living on a great college campus is that you have to make hard choices,” Steinberger said.

The SJP representatives said they had not reached out to the Hillel, Badgers for Israel or the Madison Israel Club, saying they “hadn’t seen a need.” They said in the future it may be something they should do.

Additionally, SJP representative Omar Jandal said they became hesitant to reach out to the other organizations after the Hillel posted a video on the Facebook event page, which he said equated SJP groups to “Hamas on Campus.”

Steinberger said he did not know about the video and had not seen it when asked about it Thursday afternoon. The post was removed Thursday evening.

UW professor of political science Howard Schweber said when Finkelstein spoke on campus a few years back, he couldn’t recall any particular concerns before his talk, though he cautioned students that many speakers tend to overstate their cause.

“If everyone would be a bit more critical about statements from people with whom they fundamentally agree, we’ll all be better off in trying to have this conversation,” Schweber said.

Schweber said he was not concerned that Finkelstein was anti-Semitic, saying being anti-Israel does not define a person to be an anti-Semite.

Dvorah Elster, the president of UW’s J Street chapter, a pro-peace and pro-Israel group, said she thought it would be beneficial to campus if the Jewish and Palestinian student organizations reached out to each other.

“I think it would really bring our community together and really provide an opportunity for people to have those more challenging conversations,” she said.

Amid the backlash, Comeau said WUD is looking to host a roundtable discussion with interested students and student groups on the Israel-Palestine issue to try to bring people together in a safe and open environment.

The groups have not made any intentions of engaging in a dialogue yet.