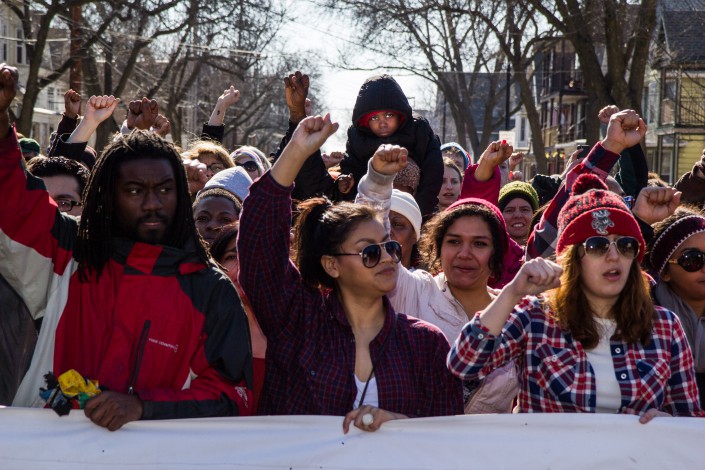 Saturday morning, a team of three Madison police officers stood outside the house at 1125 Williamson Street on the Near East Side of Madison. Two more officers were stationed across the street.

Police and passersby observed each other during a few fleeting hours of calm. Yellow tape encircled the residence.

The officers were standing guard, as they had been throughout the previous night. The state’s Department of Justice had mandated the house was not to be touched or entered — no flowers, no balloons and no signs.

Around 6:30 p.m. Friday, Rep. Chris Taylor, D-Madison, pulled into a gas station on Williamson Street. She opened her car door to several crouching men telling her to get back in. She heard several muffled pops, looked up to the house at 1125 Williamson Street and saw police bent over a man, attempting to resuscitate him.

That night, veteran Madison police officer Matthew Kenny, 45, was the first responder to reports of a possible battery and disturbances in the area. A young African American man was allegedly jumping in and out of traffic.

Kenny arrived at the apartment where the man was reported to have entered. After hearing a disturbance, he forced entry into the house. The man reportedly assaulted Kenny. During the struggle, Kenny pulled out his gun and shot him, 19-year-old Tony Robinson, multiple times in the chest.

After attempted resuscitation, Robinson died at the hospital, where his body was classified as evidence to an officer-involved shooting.

His family was not permitted to see his body. Police wrapped the house in yellow tape and stood guard. DOJ’s Department of Criminal Investigation came to the scene.

“I want to be transparent about this,” Madison Police Department Chief Michael Koval said. “[Robinson] was unarmed.”

A lot of facts have been listed about Robinson since his death. He lived with his mother, who had recently been diagnosed with multiple sclerosis, and two younger siblings. He graduated from Sun Prairie High School in 2014 and was intending to study business at Madison Area Technical College.

To his friends and family he was caring and goofy. He took care of his loved ones. Sometimes he would carry his mother when she felt too weak to walk, Robinson’s aunt Lorien Carter said.

“When I was with Tony I could never breathe,” Robinson’s friend Samantha Sorum said. “My chest always hurt. It was always something funny.”

He liked to hang out with his friends, “talk shit” and laugh, Robinson’s friend Isabel Denson said.

On Sunday, these friends and community members shared their memories of Robinson at a candlelight vigil in front of the house where he was shot.

“I will always remember him, he will always have a special place in my heart,” one said. “We need to look at this, and we need to stop what is going on. This is not okay. What happened will never be forgotten.”

Another put Robinson’s death in a national context.

Friday on Williamson Street, the sounds of gunshots, police cars and ambulances quickly turned into the chants of more than 100 demonstrators calling for racial equality, an end to police brutality and justice.

Signs painted with “#BlackLivesMatter” and “No Justice, No Peace” traveled through the crowds. Family members, including Robinson’s grandmother and aunt, spoke to the demonstrators.

On the eve of the 50th anniversary of civil rights marches in Selma, Alabama, Madison’s demonstrators migrated from Williamson Street to the City County Building in Robinson’s name. They staged a sit-in in front of police officers.

“Who can you trust?” they called. “Not the police,” they responded.

Robinson’s mother did not wish to see him.

“Tony’s grandfather pleaded with the chief, asking him to ‘please do the right thing,’” Johnson said. “Chief Koval responded by saying, ‘I will.’ That was a powerful and humbling moment.”

Saturday, as President Barack Obama addressed thousands in Selma, more than 200 Madison-area residents piled into the YWCA to debrief and strategize a path toward justice. They organized to march from the Madison Police Department to the house where Robinson was killed.

“There are going to be many approaches that we need to take in order to get justice,” Young, Gifted and Black Coalition member M Adams said. “But we cannot abandon the approach of being out in the community, being out in the street using our bodies, our people power to force justice and bring awareness.”

The officers outside 1125 Williamson Street prepared for the arrival of a community in mourning. That day, they had to tell 17-year-old Jack Spaulding, Robinson’s friend, he could not put a flower on the doorstep on which his friend was shot. They listened to the anger and frustration of hundreds of protesters.

No matter how “vitriolic” the community’s statements, Koval said MPD is ready to hear the pain and hurt, and to remain engaged with Madison’s neighborhoods — to regain their trust.

“We don’t want to be missing in action now [at] the most critical time when the police has to stand up and take those questions and take that concern to heart,” Koval said.

Koval does not expect an end to demonstrations, but asks they remain peaceful and respectful.

Kenny will not be making any direct contact with the community, Koval said. He is on paid administrative leave until the investigation takes its course. Kenny, who has served as an MPD officer for almost 13 years, was the subject of an officer-involved shooting investigation in 2007, when he responded to what became a “suicide by cop.” Kenny received a commendation for his response to that incident, Koval said.

The night Robinson reportedly assaulted Kenny and was shot dead, he was the subject of several 911 calls, Koval said.

Court records show Robinson pleaded guilty to a felony armed robbery in 2014. An incident report reveals that aseveral men, armed with real and fake guns, robbed electronics and other property from an apartment. Police arrived at the scene as the suspects were fleeing, but captured three of the four men. One was Robinson.

Koval, however, declined to comment on this blight in Robinson’s past.

“It is wholly inappropriate, and I am not going to blemish anyone’s character, especially not someone as young as he is, considering the circumstances and what his family’s been through,” Koval said.

Saturday afternoon, community members and Robinson’s family met at the Fountain of Life Covenant Church to reflect on Robinson’s life.

Robinson’s mother wrote a statement, read by other family members.

“What you see on paper is nothing in comparison to who he was as a person, a brother, a son, a friend,” she said. “At this point, I can’t even compute what has happened. Because it has not yet been real. I haven’t even had the chance to see his body to make it real for me yet.”