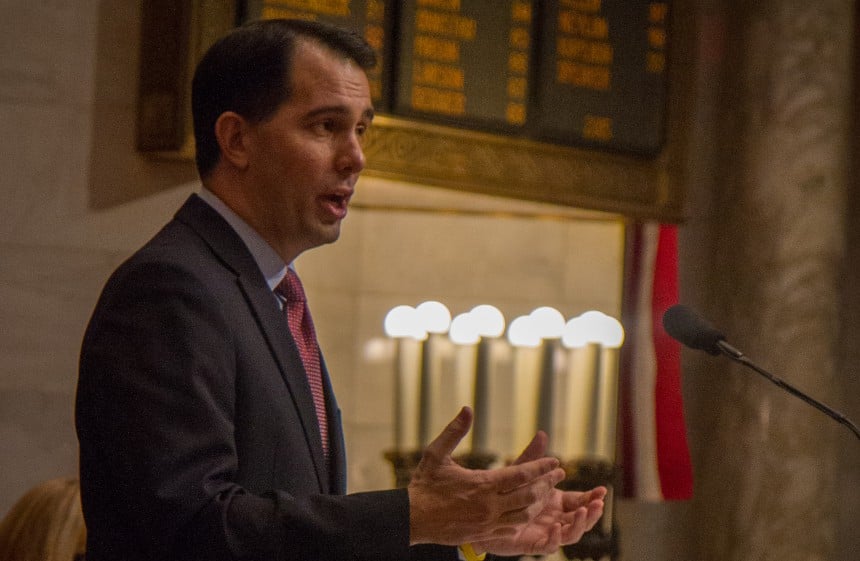 Gov. Scott Walker laid out his $68 billion budget proposal for the next two years Tuesday, calling for major changes at the University of Wisconsin System and an extension of the tuition freeze for in-state undergraduates.

Walker had previewed last week that he would seek a $300 million cut from the UW System, accompanied by increased autonomy for the system by turning it into a “public authority” with less state oversight.

In his speech, Walker called the changes a “bold proposal” that would bring savings by “freeing [the UW System] of being directly under the state government bureaucracy.”

“As the father of a UW student, I have a real interest in the success of our state system and I believe this will make the University of Wisconsin stronger in the years to come,” Walker said.

Walker again called for extending the current two-year tuition freeze on the UW System’s in-state undergraduate students, as well as a tuition freeze at technical colleges “for high demand areas.”

Yet UW System officials continued to raise concerns over Walker’s proposed $300 million in cuts over two years, saying the cuts are too large and that the cost-saving flexibilities are too far in the future to alleviate budget reductions.

UW Madison Chancellor Rebecca Blank said in a statement that while Walker’s proposed flexibilities are “welcome reforms, [they] will provide no budget relief in the short-term.”

“A $300 million cut to the base funding of the University of Wisconsin System is too much,” Blank said. “It would jeopardize the investment by Wisconsin taxpayers who have created a world-class institution in UW-Madison. It would hurt our students by increasing class sizes, reducing program offerings and potentially lengthening the time to graduation. And it may provide less access for Wisconsin students to the state’s flagship university.”

Ray Cross, the UW System president, said the system will work with state lawmakers over the coming weeks to “mitigate and reduce this cut in the coming months.”

The first step for Walker’s proposal is the Legislature’s Joint Finance Committee, which will then send its version of the budget to the full Legislature. When the Legislature agrees on the budget, it will go to Walker’s desk for his signature and any potential vetoes.

The Associated Students of Madison called on that committee to keep “public oversight and sufficient funding” for the UW System. The group noted that Walker’s proposal would in 2017 give the new UW System public authority the power to raise tuition “without legislative authorization.”

“Students want to ensure that the Joint Finance Committee keeps tuition affordable after 2017, and does not abandon public oversight of the University of Wisconsin System,” ASM Legislative Affairs Committee Chair Tom Gierok said in a statement. “Flexibility does not equal affordability.”

Walker also called for several changes to K-12 education, including removing the caps on a statewide school voucher program.

In 2013, the state created a statewide voucher school program capped at 1,000 students. Walker’s proposal would create a new program with new qualifications to better serve low-income students in public schools, but it would remove the enrollment cap.

The program would be funded with money that would have gone to public schools, and his proposal in effect keeps public school spending flat.

The budget will also not fund the Smarter Balanced Test for Common Core education standards, Walker said. Instead of having standards set outside the state, Walker said they should be set by people locally.

“I want high standards — and those decisions should be made by school board members and parents and others at the local level,” he said.

Rep. Chris Taylor, D-Madison, said the budget takes away ability for youth to succeed by taking away funds from the UW System. Without investing in public schools and universities, she said Wisconsin will lag behind the rest of the nation.