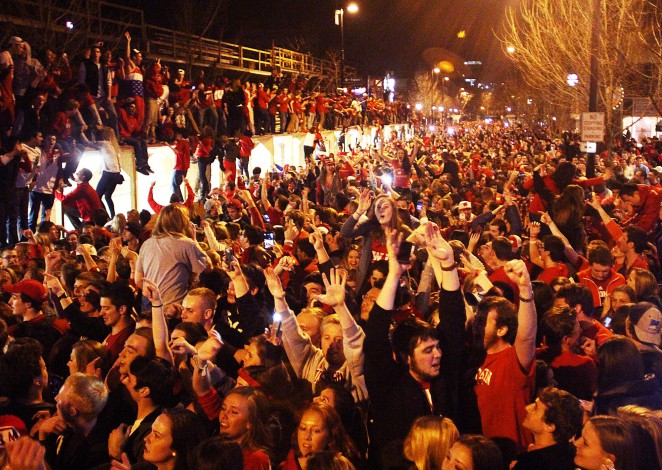 In a mad rush, Badgers took over iconic State Street Saturday night to celebrate the men’s basketball victory over University of Arizona and the advancement to the NCAA Final Four for the first time in 14 years.

Pouring out of bars and residences, fans sat atop bus shelters, climbed trees and scaled the construction structure in place over the sidewalk across from the Towers apartments while singing, dancing and chanting.

“A lot of credit needs to be given to those who came to State Street,” MPD Lt. Amy Schwartz said. “People, for the most part, were just there to celebrate with other Badger fans and most were respectful and responsible.”

Informal crowd estimates range from 8,000 to 10,000 people in the area of the 500 and 600 block of State Street, Schwartz said. She said she believes the safety of this weekend, even with such a large crowd, can be attributed to officers’ ability to connect with students in an effective way.

Video:Only minutes after the final buzzer, hundreds of students flock to State Street in Madison to celebrate the Badgers’ win.

When the Badgers advanced to the Final Four in the year 2000, State Street was filled in a similar fashion, which was part of the reason MPD prepared for these events, UWPD spokesperson Marc Lovicott said.

“Fourteen years ago, almost the exact same thing happened,” Lovicott said. “As the Badgers won … they gathered, they had a great time, just as they did on Saturday night. We knew if the Badgers won that was going to happen and we wanted to be prepared for it.”

The two police departments increased their forces in anticipation for the fan reaction. Schwartz said MPD had officers working extended shifts and coming in for overtime, city patrol officers were on-call and Madison Fire Department had crews ready at the scene as well.

Specific expenses for expanding forces are undetermined at this time, Lovicott said.

“The way we look at it, it’s just money well spent because it was a safe night overall, there were no incidents and that’s why we prepare for things like this,” Lovicott said. “It was an expense, it was overtime, but that’s what we’re there for — to make sure everything’s peaceful.”

Shortly after midnight people began to disperse on their own and police action was not necessary, Schwartz said.

Minor damage to a few signs in the area were reported, Lovicott said, which will be resolved with minimal costs for replacement.

In response, police began shooting pepper balls into the crowd, the Daily Wildcat reported, and at least a 15 members of the crowd were taken into custody.

Lovicott said UWPD and MPD are taking into consideration events from this past weekend at both universities to plan a course of action for the Final Four game against Kentucky Saturday.