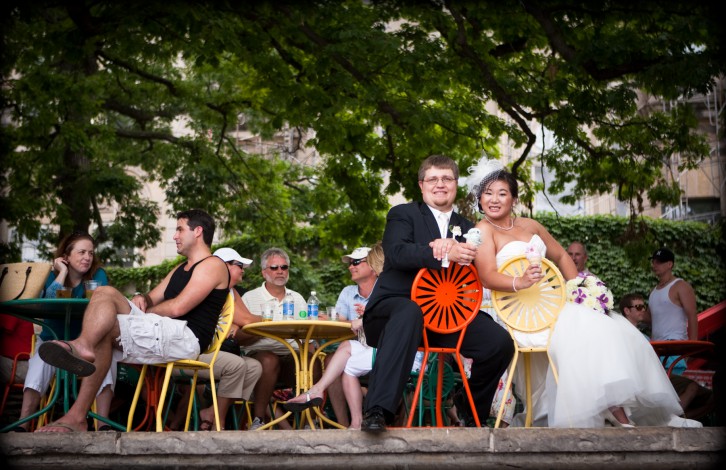 For Shayna Hetzel, a University of Wisconsin alumna, having her wedding on campus was “the pinnacle” of her Badger experience.

Hetzel married her high school sweetheart, Derek Mrozinski, on campus on July 9, 2011 in a ceremony filled with Madison pride. The pair snapped pictures at the Memorial Union Terrace, the Historical Society stairs and Library Mall, the ceremony was held at Pres House and the reception was at Union South, she said.

During her five years as a UW undergraduate, Hetzel said she felt a “unique connection” to the Wisconsin Union. Hetzel campaigned for Union South’s construction through the Wisconsin Union Directorate and later worked there for three-and-a-half years as an advance team project manager.

Hetzel and her husband were frequent sports season ticket holders and had their guests dance to game day classics such as “Jump Around” and “Time Warp.” They had Ian’s Pizza delivered later in the evening.

Hetzel said Bucky Badger was also in attendance at the wedding and was included in their grand march.

“Taking advantage of being across from Camp Randall, we brought a part of it into the wedding,” Hetzel said.

Marc Kennedy, Wisconsin Union spokesperson, said the unions are a great place to have weddings because there is a lot of nostalgia connected to them.

The department hosts an event on the first working day of every month that prospective couples must attend in person, Poad said. The event is set up using a lottery system and names are drawn from a hat to ensure fairness about who gets which date, she said. Any remaining dates are considered open and remaining dates can be booked at any time, she said.

To book a wedding at their facilities, individuals must be Wisconsin Union members, Poad said.

After booking a date, an initial fee of $1,000 is paid for reserving a banquet hall, according to the Wisconsin Union website. At Memorial Union, three rooms, Tripp Commons, the Great Hall and Varsity Hall are available depending on the number of guests, the website said.

While actual ceremonies and reception dinners cannot be held on the Memorial Union Terrace, Tripp Commons and its outdoor patio area are available and showcase a view of the Terrace area below and Lake Mendota in the distance, the website said.

Final planning begins about six months before the wedding when a second, non-refundable deposit of $3,000 is due.

Final guest count, confirmation of the menu and any necessary audio or visual equipment are finalized two weeks before the day.