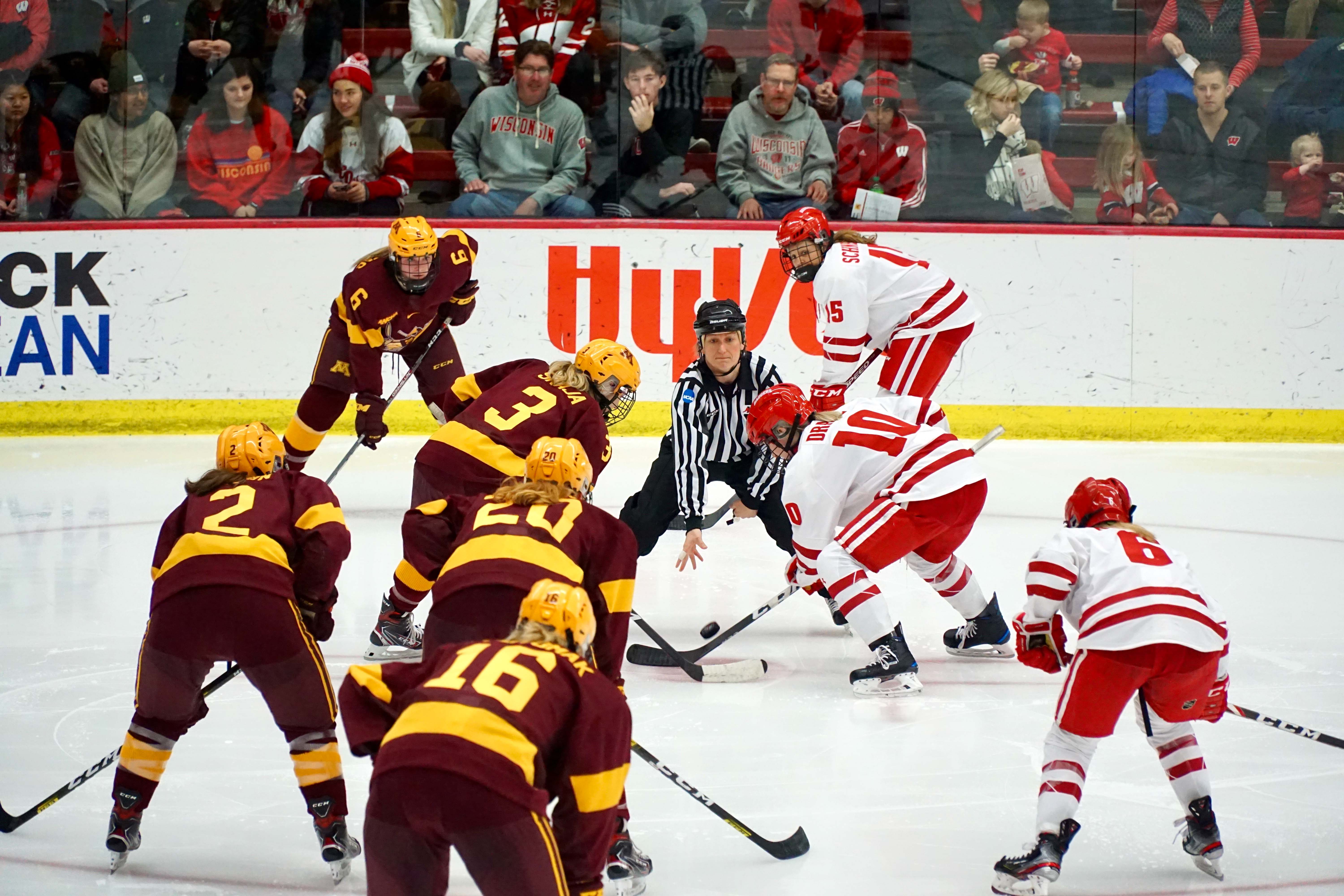 The University of Wisconsin and the University of Minnesota have perhaps the most storied rivalry in college sports, as the “Border Battle” has spanned football, hockey and anything in-between.

When Wisconsin took to the gridiron against Minnesota for the first time in Nov. 1890, the Badgers suffered what remains their largest loss in school history, a 63–0 drubbing from the Golden Gophers in football.

The game also represented the birth of one of the greatest sports rivalries ever, one which has now spanned 129 games across 129 years — the most-played rivalry in Football Bowl Subdivision history.

While Minnesota dominated most of the matchups in the early years of the rivalry, Wisconsin has been the dominant team for the past few decades, winning 21 of the last 25 matchups dating back to the 1995 season.

Wisconsin’s 21-4 record in those games has brought the all-time series to a near deadlock, with Minnesota standing at a narrow 61-60-8 advantage. In the most recent matchup, No. 13 Wisconsin bested No. 9 Minnesota in a snow-filled game which decided the Big Ten West champion by a score of 38–17.

Future Badger and current Lakeville, Minnesota resident Riley Mahlman, a 4-star offensive tackle in the class of 2021, chose Wisconsin over Minnesota despite standing as the No. 1 recruit in the state and being heavily recruited by the Gophers scouting team.

“I chose Wisconsin because it was the right fit for me,” Mahlman said. “It was the best fit for me personally for my academic and athletic goals. They both had a role in my decision and I was just blessed that Wisconsin is top notch in both education and athletics.”

Mahlman added that though the rivalry started to lose excitement during the stretch of 14 consecutive wins by the Badgers between 2004 and 2017, the win by Minnesota at Camp Randall in 2018 and the win by Wisconsin at TCF Bank Stadium in 2019 have brought buzz back to the rivalry.

Despite the fact that football is undoubtedly the most popular rivalry matchup between the two schools, other sports have thrown their names into the ring of contention for that title.

In recent years, Minnesota has continued to grow their advantage in the series, including a 3-0-1 record this season that featured two wins at the Kohl Center. However, both teams have struggled over the course of the late 2010s, with only two combined NCAA Tournament appearances since the 2014-2015 season.

Despite their struggles, both teams have seen their share of success over the course of history.

Minnesota has five National Championships, their last coming in 2003. They have also made 12 total appearances in the Frozen Four with an appearance as recently as 2014.

In the case of Wisconsin, the Badgers have totaled six National Championships, their last coming in 2006. They have also totaled nine appearances in the Frozen Four, most recently in 2010.

Wisconsin has 84 former players who have gone on to appear in the NHL, with 12 current players previously drafted by NHL teams. That number includes 2019 No. 5 overall pick Alex Turcotte and 2019 No. 15 overall pick Cole Caufield, the two star freshmen on the team.

Wisconsin and Minnesota also have their share of nationwide glory, as they sit as the No. 5 and No. 1 teams all-time for players on the US Men’s Olympic Team, respectively.

The Border Battle between Wisconsin and Minnesota hits close to home for many, especially those who cross state lines for college. This relationship stretches across family members, particularly parents with conflicting interests.

One example of that is Andy Doeden, a lifelong Minnesota native who attended UMN and is the parent of a current UW student. Doeden’s conflicting interest between family and pride is a common one that stretches across both states.

“I was happy for [my daughter] as it was the right fit for her,” Doeden said. “I wanted her to stay closer to home but knew Wisconsin was right for her. I cheer for Minnesota more, but do find myself rooting for Wisconsin when they are not playing Minnesota, regardless of the sport.”

Not all Minnesotans-turned-Badgers suffer from this conflict of interest, however.

Kate Magnuson, another parent from Minnesota, is the proud mother of a current UW student — but she has no problem cheering for the Badgers, considering her husband is a UW alumni and the family has no direct relation to UMN.

“Since I am not originally from Minnesota and have a UW student, I cheer for Wisconsin when they are not playing each other,” Magnuson said. “This year with Minnesota finally doing well in football I found myself cheering for Minnesota.”

The familial relationships between Wisconsin and Minnesota cross directly into the lives of athletes, too.

Wisconsin women’s hockey defensewoman Grace Bowlby is a Minnesota native herself, but she was raised as a Badger fan. But, like Mahlman, she chose Wisconsin not only for their athletics, but also for the academics that the school offers.

“My father went to UW-Madison, so I’ve been a Badger fan for as long as I can remember,” Bowlby said. “Despite being a fan, the academic opportunities offered at UW-Madison, especially in the School of Business, were the best fit for me, as I highly value my education.”

Bowlby is also a part of one of the best rivalries in all of college sports — the Wisconsin-Minnesota women’s hockey rivalry.

Despite not even having a team until the 1999-2000 season, Wisconsin has been perhaps the most dominant team in the sport for the last 20 seasons, with Minnesota being one of the few teams that can contend for that title.

As mentioned before, head coach Mark Johnson is a UW alumnus who went on to play professionally in the NHL and the Olympics. He took over as coach of the team for the 2002-2003 season and he has led the team to a 520-90-44 record as of Feb. 11, a career spanning 17 seasons.

During Johnson’s 17 years at the helm, the Badgers have qualified for 13 NCAA Tournaments, including every season since 2013-2014. Wisconsin has also won five championships and appeared in 12 Frozen Fours under Johnson.

Minnesota has been similarly dominant since their first season in 1997-1998. The Gophers have won seven championships and appeared in 13 Frozen Fours across their 22 seasons.

When looking at head-to-head results, the Gophers again hold the advantage with a 52-41-12 record all-time. Like football, however, the Badgers have been the better team in recent years, going 6-2-1 across the last two seasons — including postseason — with a 2-1-1 record in the 2019-2020 season.

The Border Battle has stretched into postseason play as well, with the Badgers and Gophers battling it out nine times in NCAA Tournament play. This included a meeting in the championship on three separate occasions, most recently last March when the Badgers bested Minnesota 2–0 to claim the title.

Right now, the Border Battle in women’s hockey might be the most exciting rivalry in sports, with Wisconsin ranked No. 2 and Minnesota ranked No. 4 nationally, making a rematch in the NCAA Championship all the more likely come March.

Like women’s hockey, women’s volleyball has seen a similar rise in popularity and achievements at both Wisconsin and Minnesota in recent years.

Coming off a tough loss to Illinois in the 2018 Elite Eight, the Badgers started off 2019 with a disappointing 4-4 start. From that point on, the Badgers turned their play around, rattling off 12 consecutive wins en route to a 27-7 record and a spot in the NCAA Championship Game.

Minnesota had a similarly strong season, going 27-6 on their way to a spot in the Final Four before falling to Stanford.

As they are in most other sports, Minnesota volleyball has been the better team historically against Wisconsin, sporting an 18-4 record across the last 11 seasons. However, Wisconsin altered the script slightly in 2019, winning both regular season matchups, their first time beating Minnesota since 2014.

Wisconsin’s success across athletic disciplines has bled over to another sport — men’s basketball.

Perhaps unsurprisingly, Minnesota once again holds the historical advantage at 68-56 in a rivalry that dates back to at least the 1949-1950 season. Since the 1998-1999 season, the Badgers have been the dominant team, going 29-9, including 18-2 at the Kohl Center, which opened its doors the same year.

Davison explained that while he grew up a Gopher fan, he knew that Wisconsin was where he belonged.

“I grew up a Gopher fan. My family had season tickets to the games,” Davison said. “That being said, Wisconsin was always one of my dream schools growing up. I fell in love with the campus, the coaches and the players. Felt like home right from the start. Most of my decision had to do with the people that make up the basketball program.”

UW is known to recruit heavily from the Midwest, but Minnesota is perhaps the school’s favorite state to recruit in besides Wisconsin. Besides the five current basketball players from Minnesota, Wisconsin has recently recruited big-name athletes for future Badger teams.

For football, the Badgers rank No. 25 nationally for 2020, including the recruitment of the No. 1 player from Minnesota in both the 2020 class (4-star outside linebacker Kaden Johnson) and the 2021 class (Mahlman). For basketball, the Badgers recruited 4-star Ben Carlson and 3-star Steven Crowl as part of their 2020 recruitment class.

Minnesota’s recruitment class for football ranks No. 37 nationally for 2020, as P.J. Fleck continues to build his legacy at Minnesota. The pursuits of Minnesota’s basketball recruiting has similarly gone well, as they signed 4-star Jamal Mashburn Jr. in the 2020 class, adding fuel to the fire that is the Border Battle.

Davison expressed excitement for the future of the Border Battle rivalry as both schools have increased their competitive levels in recent years.

“Both programs have been fortunate to have great players and coaches over the last few years,” Davison said. “That is what makes the rivalry competitive. I’m thankful to be a part of it.”

As the Wisconsin-Minnesota rivalry moves into another decade, the Badgers and Gophers might be more evenly matched than ever before. Despite leading in just about every sport historically, Minnesota has fallen off over the last few decades as Wisconsin has taken advantage as an elite athletic program under athletic director Barry Alvarez.

The Badgers are winning this academic year’s Border Battle by a margin of 255–105 with a total of 880 points at stake, meaning spring sports will provide plenty of excitement as the Badgers attempt to hang on to their lead and earn the victory for the first time since 2016-2017.

The Border Battle records across all sports have been kept since the 2004-2005 academic year, with the winner between the schools earning a trophy and bragging rights for an entire year.

Bowlby said it best when she explained what the rivalry means to Minnesota and Wisconsin natives alike.

“I think all Minnesota and Wisconsin natives would agree with me in that this is the biggest rivalry we face, and there isn’t much better than beating the Gophers,” Bowlby said.

No matter what happens in the next decade, you can guarantee that the Wisconsin-Minnesota Border Battle will be fun to watch for the excitement and competitiveness it provides on a yearly basis.