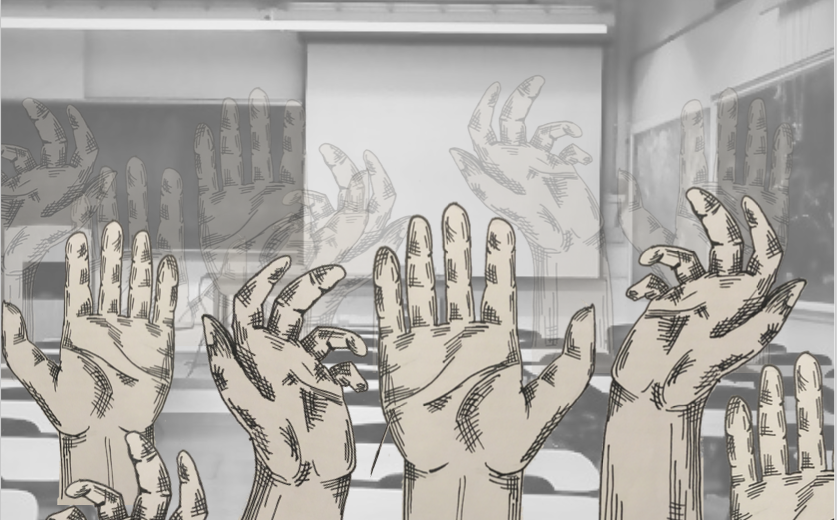 While the University of Wisconsin’s educational programs appear composed and effective, Wisconsin’s seemingly thriving educational heart does not circulate throughout the rest of the state. According to the Wisconsin Department of Public Instruction, 2,432 Emergency Teacher certifications were issued statewide during the 2017-2018 school year. Similarly, a paper from the Wisconsin Center for Education Research revealed that from 2011 to 2016, Wisconsin colleges saw a 37% decrease in enrollees in educator preparation programs.

The School of Education serves as Wisconsin’s epicenter for educational research and teacher education, as well as hosting regarded programs in health and arts-related fields. While most of the larger schools at UW see a wide variance in the number of undergraduates enrolled in its programs in the past four years, including some variances of more than 17%, the School of Education has been able to deliberately enroll approximately 1500 students for the past four fall terms.

Recent School of Education graduate Liza Shapin knew the school’s resources and thought environment would be the perfect place for her undergraduate studies.

“I never understood how someone could walk around somewhere and be like ‘Oh this is right,’ but I got that feeling,” Shapin said.

Regardless, indicators immediately available to the public present a clear narrative: Wisconsin needs teachers and needs them now. Further examination of the issue and factors at play in Wisconsin’s teacher shortage differentiates the state’s needs in comparison to other states around the nation, with UW’s School of Education placed at the core of solving the problem.

Teacher shortages and related issues are not confined by state borders. According to the Learning Policy Institute, many troubling individual indicators lead to a fraughtful teacher marketplace. In the 2015-2016 school year, 8.8% of teachers nationwide were not fully certified to teach. Teacher attrition rates, which typically landed around 5% in the 1990s, grew to 7.3% in 2018.

These two metrics indicate Wisconsin has trouble retaining teachers within the profession and attracting diverse and representative pools of enrollees in teacher education programs. State Superintendent Carolyn Stanford Taylor captured the needs of these statistics in her first State of Education address on Sept. 19.

“At a time when far too many teachers are leaving the profession and too many students aren’t aspiring to becoming teachers, it is so important to commit to doing all we can to recruit the next generation of educators and to embrace the ones that we have,” Stanford Taylor said.

This crisis is not a new area of study for Wisconsinites. In 2016, then-State Superintendent Tony Evers created a working group of district administrators and teachers from across the state to address growing school staffing issues. Among the main findings of the report, the group noted a “void of talent” in Wisconsin school districts, particularly in high-demand areas of instruction, in part due to high attrition rates. Rural districts received particular attention in the report, as decreased supply of teachers has led these districts to be “short-handed everywhere.”

Tara Scott, a current UW graduate student and student-teacher resident in Beloit, said the effects of the shortage in her district are incredibly noticeable.

“It’s very much a struggle right now,” Scott said about her partner district. “They’re still trying to fill positions for this school year because they haven’t found qualified candidates.”

Behind the red doors

At UW, the creation of the Teacher Education Center in 2018 speaks directly to these two prongs of concern echoed from LPI’s statistics and Stanford Taylor.

In correspondence with the Center’s vision “to advance UW–Madison’s leadership and impact in the field of education by serving as an incubator for teacher education practices and providing support for and connections between our research, state policy and our preparation of future teachers,” Faculty Director Kimber Wilkerson sees the program as a direct confrontation to the issues plaguing Wisconsin’s education system today.

In addition to developing resources to increase teacher preparation, which she noted is the driving factor behind teacher retention rates, Wilkerson also highlighted the Center’s goal of attracting people to a teaching career who may be interested in the profession but do not have access to traditional routes of teacher education.

“The Teacher Education Center was brought into being in part to address these exact issues,” Wilkerson said.

Plans are brewing to address Wisconsin’s teacher shortage beyond the confines of the university, too. The University of Wisconsin System’s Task Force for Advancing Teachers and School Leaders, co-chaired by UW School of Education Dean Diana Hess, is set to issue a report answering two central questions shared by the UW System and key stakeholders: how financial incentive programs can be created to increase accessibility to teacher education programs and how concerns can be understood and public esteem raised for teachers statewide.

The report missed its initial May 1, 2019 deadline, but in an emailed statement to The Badger Herald, Hess stated the report will be delivered to the Board of Regents on December 5, 2019.

The task force also looks to address another issue not immediately made available by current statistical metrics — the out-migration of UW System graduates who take jobs outside of Wisconsin. While Wilkerson noted 76% of School of Education undergraduates in Fall 2018 were Wisconsin residents and the majority of teacher education graduates teach in Wisconsin, concrete data on net out-migration has yet to be gathered.

According to the LRI, higher starting salaries and union support are available in both Minnesota and Illinois, which leave these neighboring states as attractive options for Wisconsin graduates.

Despite the lower statistical attractiveness for Wisconsin jobs, Shapin, an Illinois native, was not deterred by these numbers and pursued career options in both Wisconsin and Illinois.

“I applied to everything and everywhere,” Shapin said.

As a music education graduate, Shapin’s area of expertise was recently considered an area of need in Wisconsin schools, but a 2018 study from the Wisconsin Center for Education Research detailed the high supply of music teacher applicants compared to other fields.

In fact, many Wisconsin teaching positions are quite competitive. In Shapin’s case, there are approximately three-times the number of applicants seeking a job in music education in Wisconsin than there are open positions each school year, the study explained.

The School of Education has made changes in its enrollment options over the past decade to keep pace with these shifting demands. According to Wilkerson, the school made a conscious decision in recent years to cut its secondary education undergraduate program and is limiting enrollment in the area to graduate students. Furthermore, the school is capping the number of students accepted to the elementary education undergraduate program due to an oversupply of elementary education teachers at the time.

“You’ll see a decline in our enrollment, that wasn’t a reflection of a lack of interest, that was our decision to reduce the number of students who we actually admitted to the program,” Wilkerson said.

According to Wilkerson, with reduced enrollment in programs with higher job applicant pools, the School of Education is able to reallocate resources and better support students across the School.

Deciphering which programs necessitate greater investments and which can be deemphasized is part of the School of Education’s commitment to matching the needs of Wisconsin, Wilkerson said.

“Part of my work in the Teacher Education Center is thinking about how well do our programs match not only what future teachers might be interested in, but also how well do they match what the school districts in the state are looking for,” Wilkerson said.

In addition to the Teacher Education Center, the School of Education continues to create and test ways to address Wisconsin’s teacher shortage.

One such new program is the UW Special Educational Teacher Residency program. Funded by a federal grant, the program partners with special education programs in school districts in Beloit and other rural Wisconsin areas.

The program allows for graduate students to spend a school year and two summer semesters shadowing a teacher in their designated district. These students are given living stipends to assist with relocation near their district, and supporting teachers are given stipends as well. Once graduated, the residents are guaranteed work in their district for three years after completion of the residency.

A current participant of this program, Scott appreciates the mixture of experiences.

“I really like all of the hands-on practical experience you get,” Scott said. “You’re not only going to classes as a student, but then you also are full-time student teaching so you’re in the classroom every day, all day.”

Additionally, Scott said programs like UW SET help prospective teachers who come from non-traditional backgrounds feel supported in their decision in the initial steps of pursuing their career in education. With increased support from their shadowing teacher, residents have the opportunity to relate to the struggles and joys of teaching on a personal level.

Scott, for example, came to the program after earning her bachelor’s degree in an unrelated field. Her “round-about” way of deciding to teach gave her some fear.

“At first, I was really hesitant coming from a non-educational background,” Scott said. “With the hands-on experience and the knowledge I’ve already gained within two weeks of me entering the school year and then the summer, I feel like I’ll be confident by the end of the year to be able to have a classroom of my own.”

“I was fortunate to get a high school choir job in Wisconsin, and I really fell in love with the program and school,” Shapin said.

Additionally, Shapin stressed the joy she finds in being a teacher, noting the emotional benefits outweigh the negatives often portrayed in teacher shortage narratives.

Scott also considers herself fortunate with her current residency in Beloit, noting it has allowed her to see beyond the stereotypes of the over-stressed teacher stories so often told.

“I would really encourage people to keep an open mind,” Scott said. “There’s a lot of stereotypes around education where we’re overworked and underpaid. They have a lot more going on in a given day, which is true, but the joy that you get from connecting with those kids and seeing the growth you can help them make, not only educationally but with other aspects of their life, is just so rewarding that it’s worth exploring.”

Moving beyond popular conceptions, the teacher shortage gives Wisconsin a chance to examine the root causes of some of the state’s problems. By creating programs to address these issues and attract a wider variety of students to teacher education programs, the UW School of Education looks to not only bring in a broader cohort of future educators to meet the needs of Wisconsin schools, but support students’ passions to encourage them to be prepared.

Wilkerson feels this environment with education majors every day. While noting it’s “slight,” the School has noticed an upward trend of applicants to its teacher education programs.

“It’s not a trivial major,” Wilkerson said. “They’re student teaching at least full-time for a full semester, sometimes two semesters, they’re doing practicums, exams, a full class load. They are asked to do a lot, and they’re doing it and embracing it.”