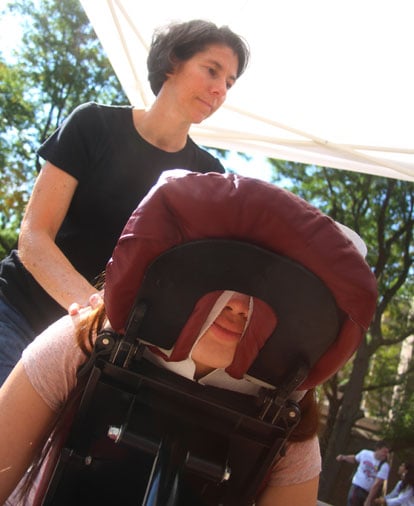 It’s fall in Madtown, and cool, artificial air is slowly but surely becoming considerably more attractive than sex — that is, for frugal and creative young adults. That’s right, you may want to reevaluate that Tinder hookup. Dozens of hot and sweaty college students are using intimacy as a way into a chilled home.

While living on your own has its freedoms, it also provides wake up calls that come in the form of an electricity bill. Rent in downtown Madison is enough to make a bank account hurt, and AC is just another burden.

In response, the smartest people this campus has to offer have begun to ask the question: why lay in your own sweat when you can lay in an unsuspecting individual’s air conditioned room?

Many have come to this resolution. Melody Zhou, a third-year nursing student, lives in a sorority house where many amenities, such as an in-house cook and two whole bathrooms, are provided. One amenity missing? Air conditioning.

Pitches to NBC: New coronavirus game showsThe coronavirus pandemic will change the way we interact in the world for years to come. Try to imagine when Read…

“It’s hot as balls,” Zhou said. “Wait, ew, did you actually write that down?”

Zhou and her sisters were sweltering this past summer. With the novel coronavirus, they couldn’t bounce in and out of coffee shops and State Street stores all day. Even so, some temperatures were so high, their heat problems continued into the night and made sleeping impossible.

“[There] was a week or two in August when the temperatures were in the 80s or 90s and at some points, according to my thermometer, our room was about 90 degrees. The temperature didn’t drop much at night so my roommates and I weren’t able to sleep because it was so hot,” Zhou said.

“Basically, we would flirt with people we had hooked up with in the past in order to sleep somewhere that wasn’t our place so we could actually sleep,” Zhou said. “We tried to do this while coming in contact with as few people as possible because of COVID.”

If you’ve never heard of this concept, you’re not alone. Colloquially, “Banging for Roof” is just what it sounds like: hooking up with someone in order to secure a cool bed for the night. Though its origins are unclear, it’s heavily present in younger, sexually active communities. That’s not to say that Zhou and her sisters were constantly banging, though.

Biology major Ananda Delgado had her fair share of free air conditioning without ever coming into contact with genitalia.

“Sometimes we wouldn’t even hook up with the [guys]— just pretend like we would so we could sleep in air conditioning,” Delgado said. “Other times we helped our roommates out, with several of us crashing at the same apartment — in the living room — with the excuse of being ‘too tired to go home’ while one person was hooking up with someone they liked.” 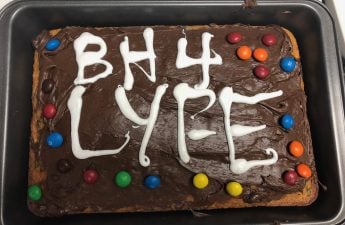 Spring Superlatives: Where The Badger Herald staff will be in 20 yearsIn 20 years, this person will be…. Management: Abby Doeden: Editor-in-Chief (2020); Still keeps in touch with Red from the Read…

The girls had a succinct, fool-proof plan which they executed at least three times a week.

“People definitely caught on, but didn’t seem to mind much as long as they were getting laid,” Delgado said.

The now cooled girls have never regretted a single night spent in a luxuriously cool environment.

“[Air conditioning] and a good night’s sleep is always worth it,” Zhou confirmed.

Looking forward to the winter, the utility for this unique transaction can be extrapolated to any other situations where a problem with someone’s residence can be fixed by trading another person’s better residence for sex.

Getting into the cooler months, Delgado has not discounted banging for heat instead of AC as an option.

“It’s definitely a possibility we keep doing this into the winter,” Delgado said. “It gets cold up here, if I want a warm bed, I’ll get it one way or another.” 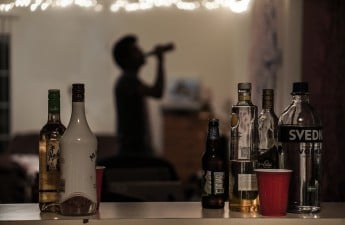 How to make good decisions while intoxicatedIt’s November, which means many University of Wisconsin students are now actively drinking to stay warm. The warmth of alcohol Read…

In all, Banging for Roof is one highly used, highly successful method of attaining needed relief from any ailments someone experiences in their own home. Take it from those who have gained an appreciation for it over these past months, there’s no reason this shouldn’t be added to someone’s repertoire of reasons for hooking up with people.

“It’s all about what you want,” Zhou said, wrapping up her interview. “Go out and get it, queens.” 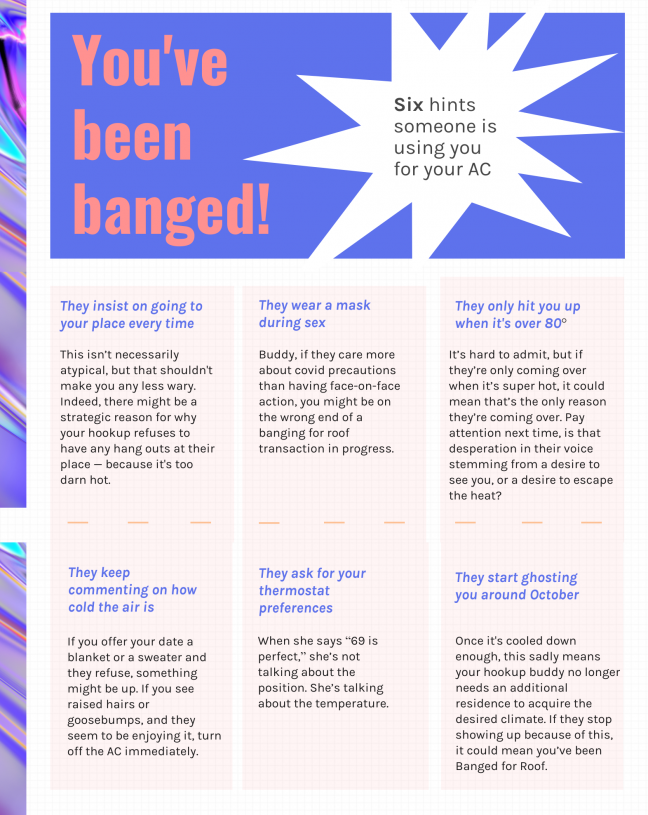