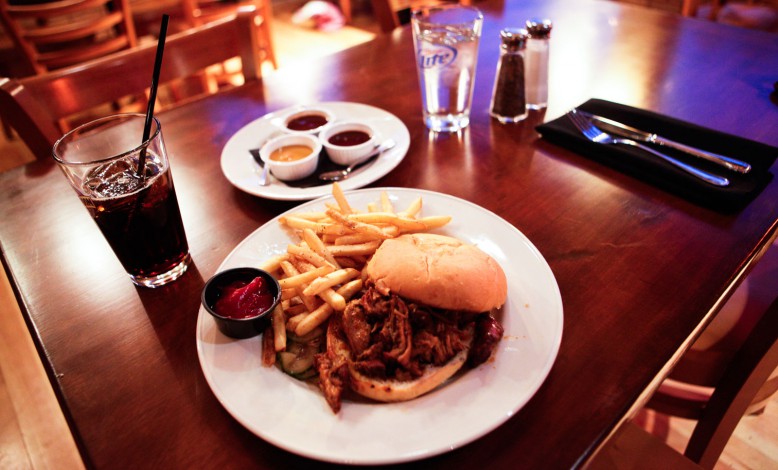 Brickhouse BBQ will surprise you. A step inside will reveal a step up from the usual franchises and greasy spoons of the campus area, with an interior more likely to be found in Milwaukee’s Historic Third Ward than situated adjacent to Riley’s Wines of the World. With three floors of dining room space and an outdoor patio for alfresco finger-licking, Brickhouse BBQ proves to be a refreshingly upscale barbecue house with ribs, chicken and all the fixin’s.

Brickhouse BBQ’s menu doesn’t stray too far off the beaten path of traditional Memphis-style selections (for barbecue teetotalers, “Memphis-style” cuisine is often pork-centric and features dry rubs with tangy sauces), but it’s not your typical “come on down to the pit and gorge yourself into a pork-induced food coma!” joint. It’s as refined as a Madison barbecue is likely going to get, eschewing the sticky sauce bottles and frequently restocked rolls of paper towel found at a place like Famous Dave’s — not that barbecue aficionados should be afraid to get their hands dirty.

That said, the gains in ambience will not offend your taste buds. Anything with pulled pork on the menu is destined to please — the quesadilla appetizer is highly recommended — and everyone but the stingiest of Memphis purists will find the pork ribs up to snuff. There are better places in the Madison area for beef brisket (Famous Dave’s, Smoky Jon’s), a staple of Texas-style barbecue, but the rest of the entrees are decidedly a positive addition to the already multifarious downtown food scene.

The sides are generally traditional, good-but-not-outstanding accompaniments: spicy green beans, cole slaw, macaroni and cheese, etc. The cornbread, not often the object of much consideration, is baked with a trace of green pepper and a spicier balance to the otherwise mild entrees and sides. The portions aren’t huge but neither is the price tag; it’s not impossible to get in and out for only $20 a plate.

Finding good beer in Wisconsin is about as hard as finding disappointing sports teams in Minnesota, but nonetheless an embarrassment of alcoholic riches awaits to complement the porcine delights at Brickhouse BBQ. The bars (there are three of them, one on each floor) all feature 40 taps with 20 Wisconsin beers and 16 more American crafts. Diverse picks ranging from New Glarus’ Stone Soup to Tyranena’s cocoa oatmeal Down ‘N Dirty, from Fat Tire to Arrogant Bastard can be found. The bartenders will cheerily make an informed suggestion to prevent you from scratching your head over the impressive taps list.

But no barbecue joint will earn its Memphis stripes without suitable offerings of the hard stuff, and Brickhouse has an impressive (especially by campus area standards) selection of 41 varieties of bourbon and 20 more whiskeys. Granted, many of the bourbons are there for the sake of covering their bases, including Jim Beam, Maker’s Mark and Knob Creek, but for anybody so discriminatingly inclined, the more expensive Four Roses Marriage and Pappy Van Winkle are also available.

While the foundation for a reliable barbecue house in the campus area has been firmly set, the usual staffing and service issues commonly afflicting a newly opened restaurant need to be sorted out. Patrons waited while numerous tables were visibly open, and the waitstaff was ostensibly still familiarizing itself with the dinner rush. But these peccadilloes are forgivable given the restaurant’s novelty, and the inconvenience of waiting is softened by the three bars and the diverse libations it has to offer.