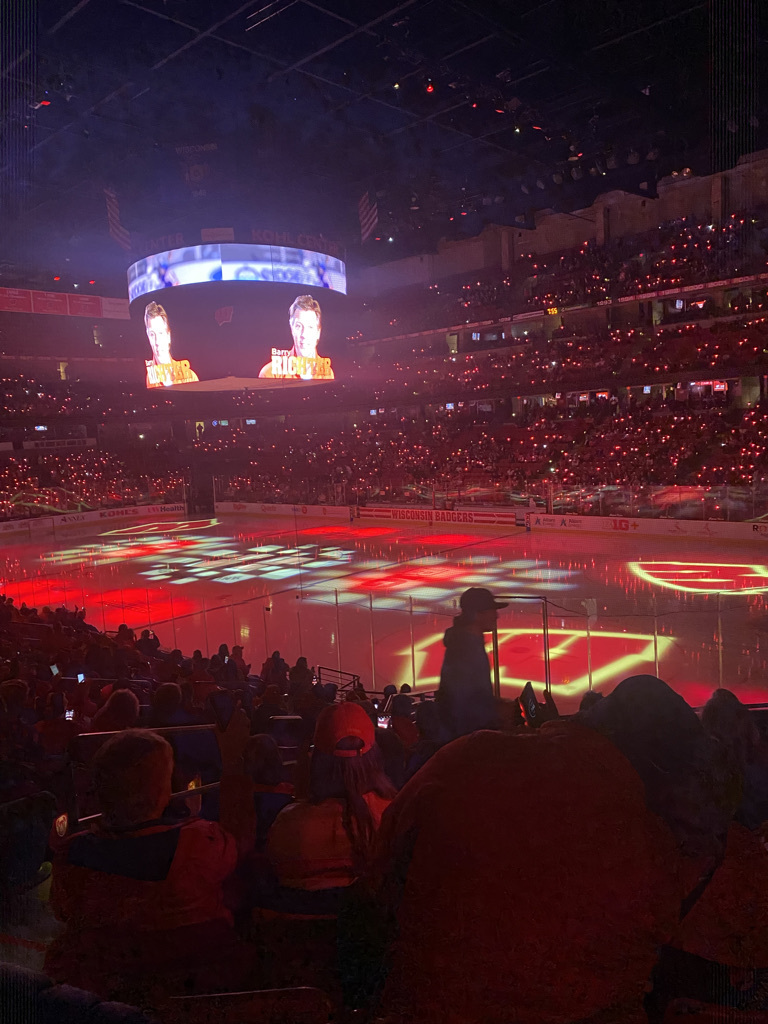 After an impressive series sweep against Minnesota, the Wisconsin Badgers men’s hockey team (4-6, 2-2-1 Big Ten) heads to South Bend, Indiana to take on Big Ten rival Notre Dame (6-3, 0-2). The Fighting Irish swept Holy Cross last weekend and looked dominant while doing so. But the fifteenth ranked Irish have only played two conference games — and they lost both to Minnesota.

After three straight weekends against top five teams, a weekend in South Bend might serve as a bit of a trap for an undermanned Wisconsin team. A step down in competition, however, might also spark what has been a disappointing offense to start the year. Here is everything you need to know before this Big Ten weekend showdown.

Notre Dame has been paced offensively by junior Max Ellis. The 5-foot-9-inch forward has a total of five goals and 11 points in nine games. The winger has driven an Irish offense that has struggled against good teams.

In their six wins, Notre Dame averaged 4.5 goals per game, while in their three losses they scored just 1.6. They have a streaky-kind-of offense that has a tendency to explode, but when they have played defensive focused teams like Minnesota, they have struggled.

On the back end, the Irish are led by captain Adam Karashik. He is a graduate transfer student from UConn where he also served as team captain. Karashik is not much of an offensive force and while he does have four assists on the year, he is still certainly a stay-home defenseman. He plays conservatively and has a hockey IQ that is off the charts. He is a shot blocking machine and an outstanding leader for Notre Dame.

In net for Notre Dame are Matthew Galajda and Ryan Bischel. Galajda is a decorated graduate transfer from Cornell. In his time in upstate New York, Galajda was a two-time Ivy League player of the year, two-time Mike Richter Award finalist and a Hobey Baker Award finalist. Galajda is one of the most accomplished players in all of college hockey and his numbers this year have backed that up. In his six starts, Galajda has a save percentage of .932 and a goals against average of a measly 1.67.

The Irish special teams unit is quite interesting. Their penalty kill is second in the nation by percentage as they have surrendered just one power play goal on 34 opponent chances. Experience has proved valuable in this situation as the penalty killers have logged a lot of game minutes together during their time at Notre Dame.

On the other side of things, their power play has been one of the worst in the nation. They have scored just three power play goals on 33 chances. They rank just behind Wisconsin with their .091 power play success rate. For an offense as good as the one that Notre Dame has, the lack of scoring on the man advantage has been concerning, to say the least.

Head Coach Jeff Jackson is one of the brightest minds in college hockey and if there is anyone that can figure out a way to draw up a successful power play, it is him. Jackson is in his seventeenth season at Notre Dame. He has won eight conference championships at Notre Dame and taken the Irish to four Frozen Four’s. Jeff Jackson is one of just 15 coaches to win the Spencer Penrose Award as the National Coach of the Year multiple times. Jackson has won over 500 games at the college level, including the 1992 and 1994 National Championships while at Lake Superior State. He is a hockey genius and an absolute legend that stands behind the Notre Dame bench.

Who gets the net:

I mentioned it last week but it bears repeating — the goalie competition for Wisconsin continues to get more interesting. Coming into the year, Cameron Rowe was the clear-cut number one for the Badgers. But he has struggled mightily in his five starts. Rowe has a goals against average over four and a putrid save percentage of just .855. Not only has Rowe not lived up to expectations, but he has been actively bad for Wisconsin.

On the other side of things, Jared Moe has impressed for Tony Granato’s club. Moe nearly single-handedly beat number five ranked Minnesota last Friday. He had 44 saves in the overtime battle and proved he should be the Friday night starter for the near future. Moe came on in relief of Cameron Rowe early in the second period of the Saturday night game against Minnesota and once again played well. He did not allow a goal on 12 shots and kept Wisconsin in the game.

I would be shocked if Jared Moe didn’t get the start on Friday night in South Bend and he probably deserves the net on Saturday as well. I think Tony Granato will put Cameron Rowe back out there, though, with the hope he will start to find what made him so special at the end of last season.

Much like last week, Wisconsin is battered and bruised all-over. Mike Vorlicky will remain out until the second half of the season after his surgery, while Owen Lindmark and Tyler Inamoto have each missed the last handful of games.

While it looks like Inamoto will return for this weekend’s series, it is possible the Badgers might have to trade his return for a different defenseman’s absence.

Freshman phenom Corson Ceulemans took a high, hard hit to the head from Minnesota’s Matt Staudacher last Saturday and is being considered day-to-day. His status for this weekend is unclear, but he did not practice this week. Ceulemans finally looked like he was getting comfortable last weekend. He is the leader of the Wisconsin power play and is currently tied for the team lead in points with five.

If Ceulemans is out for the weekend as it seems he will be, that will put even more strain on a Wisconsin offense that has been terrible to start the year.

In addition to Ceulemans, team captain Tarek Baker left last Saturday’s game early. While his injury does not seem to be significant, it is something to watch out for.

Notre Dame is one of the oldest and most experienced teams in all of college hockey. Their starting lineup last weekend had eight different players with more than 70 career games. They have experience everywhere and will certainly look to take advantage of the young, inexperienced and injured Wisconsin team.

While losing Corson Ceulemans hurts, getting Tyler Inamoto back is a huge boost for the Badgers. They have looked really good defensively at times without him and getting their best defender back will only boost the defense.

Notre Dame’s offense is scary because of their ability to stack goals on top of each other quickly. But as mentioned earlier, when they have played defensive oriented teams, they have struggled. Wisconsin will almost certainly be content to sit back in their own zone and let Notre Dame drive possession, much like they did last week against Minnesota.

The Badgers seem to believe their team structure and good defensive play is enough to win games and for the most part, that seems accurate. They have been let down by poor goaltending, but even an average showing in net should be enough to keep Wisconsin in it.

I think we will see two low-scoring, slow-paced games this weekend. With how Jared Moe played last week against Minnesota, it would be hard to bet against him right now. But with Cameron Rowe most likely getting the start on Saturday, I think Notre Dame will get that one.