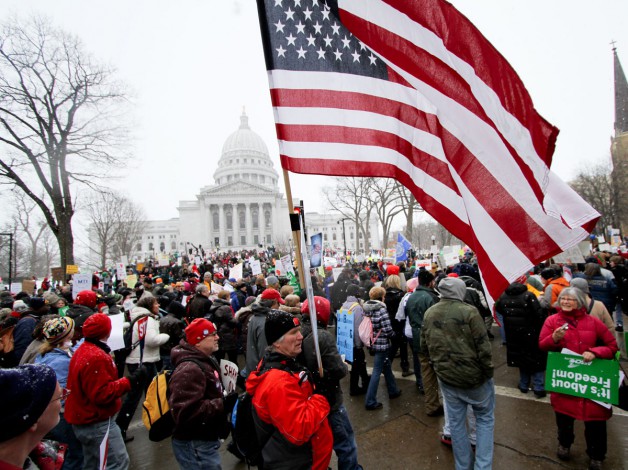 Thousands of protesters from across Wisconsin converged on Capitol Square Saturday for the largest pro-union rally so far this month.
Herald Archives

Like many others, I daydream about what former Gov. Scott Walker is doing with all his free time. But I don’t have to fantasize any more. Apparently, the former Wisconsin governor wants to dedicate the next part of his public life to balancing the U.S. government budget.

It’s hard to stress how silly this quest is.

The Center for State-led National Debt solutions — the group Walker now heads — wants to hold a convention to approve a balanced budget amendment to the U.S. Constitution. Effectively, the amendment would require that government spending be roughly equal to the tax revenues the government takes in.

The idea that the U.S. federal budget should be balanced — that tax revenues should finance all of the government’s operations — is based on a fundamentally misinformed view of how government budgets work.

The U.S. federal government, unlike state and local governments, is something economists call a “sovereign monetary authority” —  an entity that prints and controls its money. Since the federal government prints its own currency and manages the money supply through taxation and monetary policy, it has the power to issue debt dominated in this currency.

Democrats must stop shifting the metrics by which they define economic successWith the gubernatorial elections right around the corner, Wisconsin Democrats are looking to finally make their dreams come true and Read…

But this debt isn’t like household debt — that is, a liability that needs to be repaid — because in economic terms, public debts are just private assets. Citizens, businesses and other governments hold U.S. government debt in the form of treasury bonds or securities. Also, this debt cannot be defaulted on, because it is denominated in currency controlled by the U.S. government. When the government needs to pay its debts, it prints money and pays them. This isn’t a misuse of public money, or an example of a government operating “beyond its means” — it’s an integral part of how government finance works.

Currently, the government’s activities aren’t made with an eye towards balanced budgets, making the idea of balancing every part of the budget especially ludicrous. As a landmark 2000 paper by Stephanie Kelton explained, the federal government doesn’t really finance its activities by levying taxes or issuing bonds, at least in the short term. If the government wants a bridge built, it contracts builders and deposits money in their bank accounts to pay for it.

“The basic idea is that the government can’t run out of money,” Kelton said. “It creates money just by spending.”

John Maynard Keynes’ most important insight was that the government should use this power in deficit spending during economic downturns. When the economy is in a recession, like the Great Depression that preceded the 1929 stock market crash — or the one following the 2007-08 subprime mortgage crisis — the economy isn’t as productive as it can be, and society suffers because of it.

To alleviate this suffering, Keynes said the government needs to step in and spend. It needs to expand social support programs like unemployment benefits, food assistance, crop insurance and health insurance programs like Medicare.

It needs to guarantee jobs to unemployed people that want to be working. It should provide debt relief to homeowners and create housing authorities to ensure access to affordable housing. If a government is constitutionally obligated to balance its budget, it can’t do any of these things — it can do nothing to mitigate the most harmful effects of market capitalism.

Balanced budgets turn money into the scarce resource it doesn’t have to be, and society would suffer because of it. The government has a duty to step in when markets fail and balanced budgets take the tools it needs to fulfill this duty.

Money should never be scarce. Ever.