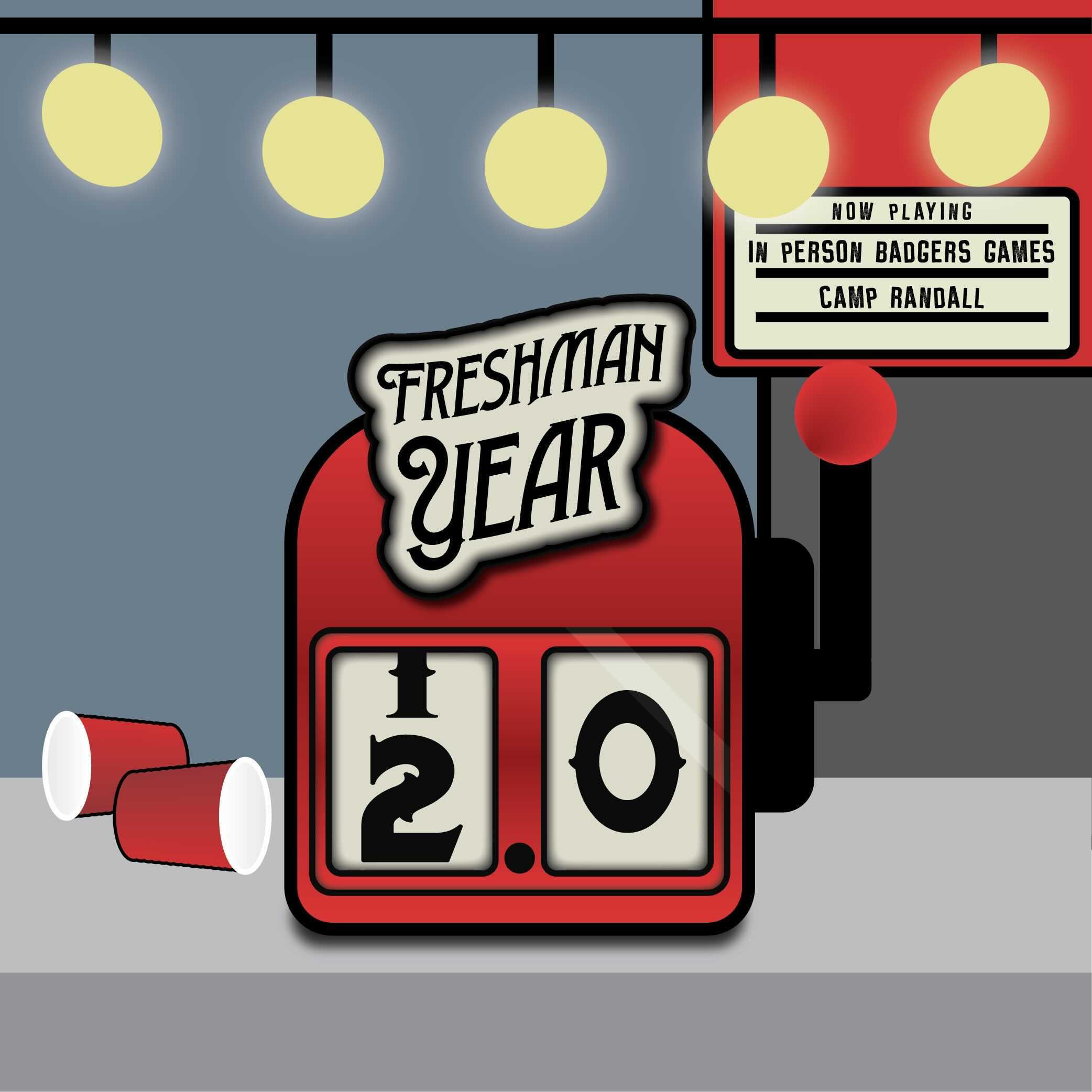 Last year, dorm life was there, but different — complete with mandatory mask mandates and COVID-19 testing. Camp Randall football games, normally characterized by herds of fans in red and white going crazy to House of Pain’s “Jump Around,” were non-existent. College parties were few and far between, sometimes with serious repercussions.

Despite the challenges COVID-19 brought to campus and the country, the uniqueness of the freshmen experience persevered and took shape in different ways. Now, as administrators and students anticipate fall 2021 will resemble fall 2019, the class of 2024 can likely relate more to incoming first-years than their older junior and senior counterparts.

With much of their freshmen year altered due to the pandemic, the University of Wisconsin rising sophomores are in for an exciting but rude awakening this fall — a freshman year 2.0.

Rising sophomore Daniel Otchere harbors mixed feelings about returning to campus this fall because of that exact reason — and he is surely not alone.

“I’m honestly nervous because it’s really just like freshman year all over again,” Otchere said. “I don’t know where anything is because I didn’t really leave my room that much, but I’m pretty excited about what it will be like to have a ‘normal’ year of college.”

Despite the isolation challenges brought on by COVID-19, Mallory Louis, Leah Rietz and Maggie Siepmann managed to become friends through Greek life in the pandemic year. Louis and Seipmann are members of Delta Gamma and Rietz is a member of Alpha Xi Delta. While going Greek brought all three girls together, their living situations set them apart — which became the case for many freshmen in the dorms.

After getting off the waitlist at UW, Louis was placed in Chadbourne Residence Hall. She expected to have a roommate. Yet, when move-in day arrived, she realized only her name was on her door.

The university told Louis the roommate she was assigned decided to drop out because of the pandemic.

“In the beginning, it was actually super hard,” Louis said. “I didn’t have a roommate to do things with or go outside of my comfort zone with.”

Louis was not the only resident flying solo. While a typical year brings about 8,000 undergrads to the university’s 21 residence halls, UW started the fall 2020 semester with 6,500 undergrads in 19 resident halls. And that number only declined as the year progressed.

As COVID-19 cases increased, so did the number of students staying in off-campus housing. Certain factors also accelerated the move-out rate, such as the Sellery and Witte lockdown in September.

The two biggest dorms on campus were quarantined for two weeks after UW experienced a 20% positivity rate and over 1,000 positive COVID-19 cases in the weeks prior to the shutdown. The announcement came late in the evening on Sept. 9, sending freshmen scrambling for food and supplies before the lockdown began at 10 p.m.

The spike also halted all in-person instruction for two weeks and caused tensions to boil between local government officials and university administrators over rivaling COVID-19 policies. Dane County Executive Joe Parisi sent a letter to the university asking UW to send students in the dorms home after 74% of the county’s cases were linked to the campus.

Rietz, one of many students who lived through part of the lockdown, said those two weeks altered her entire year.

“I was in Witte and we had that two-week lockdown,” Rietz said. “It was during my birthday. We couldn’t go outside. It was overall horrible. But probably 70 to 80% of my floor decided to move out during that time.”

UW spokesperson Meredith McGlone reported 5% of all students canceled their housing contracts entirely within the first few weeks of the academic year as the university-imposed quarantine on Sellery and Witte dimmed the campus’ prospects of a normal year.

Reitz and her roommate were among the hundreds of students who vacated the dorms, moving into an apartment a few blocks away from Witte after the lockdown.

The change forced Rietz to grow up quite quickly, she said. Though she admits apartment living was luxurious at the time, she has some regrets about moving out.

“A dorm experience is something I just missed out on.” Reitz said. “And I wish I would’ve gotten it.”

Reitz is not alone in feeling left out of this crucial part of the freshman experience.

Following the departure of more than 300 students from University Housing amid the dorm quarantines, the few vacancies in popular off-campus residences such as Statesider quickly filled up. Students clamoring to move out of the dorms were soon met with growing waitlists of other freshmen trying to avoid university-imposed activity limits and precautions.

But, once lockdowns were lifted and freshmen were able to socialize — with prior dorm precautions still in place — those who moved out abruptly missed their chance to bond with those in their halls.

Siepmann said she sees why Reitz and others feel as though they missed out. During the Witte lockdown, Siepmann, her roommate and other friends made arrangements to stay at her family’s lake house. When the two weeks were over, the future was still uncertain. Many students feared the two dorms would go into lockdown for a second time, she said.

Still, Siepmann and her friends decided to roll the dice. Looking back, she said the risk was worth it.

“I’m so glad that me and my friends stuck it out and stayed in Witte because some of my friends moved out,” Siepmann said. “Overall, I had a super great experience and I would not trade living in the dorms during COVID for the world because I met super, super great friends on my floor.”

Quarantines aside, living in the dorms was still not easy — and the sorely missed experience has come back to weigh on UW as the residence halls see record-high demands.

In the dormitories, masks were required, four-person room limits were enforced and weekly COVID-19 testing was mandatory. A lack of in-person classes also kept students cooped up in the small spaces, adding extra hurdles to an already challenging endeavor for first-years.

Otchere is one of countless students who entered the dorms with all of his courses were online last year. In the fall, 64% of classes were delivered virtually. The number of classes online jumped to 82% in the spring as case numbers soared.

But not all students suffered a Zoom-filled schedule as Otchere’s roommate, Patrick Gosenheimer, tells a different story.

In the fall, Gosenheimer had two in-person discussions. In the spring, he attended one class entirely in person — which freshmen who dreamed of a typical first year might consider lucky.

Despite what he considered good fortune with in-person classes, Gosenheimer and other students still faced a litany of additional difficulties as COVID-19 infiltrated the dorms.

Gosenheimer and Otchere took the random roommate route, another normal learning curve that was complicated by the pandemic. But the pair grew close and managed to find little things to enjoy despite the difficulties of day-to-day dorm life in a global epidemic.

“Sometimes it was a bit difficult trying to actually socialize and enjoy that part of the year, while obviously the pandemic and everything else happened,” Otchere said. “But I feel like they [UW] still tried their best to make it as accessible and reasonable as they could so that we could still enjoy the year as much as possible.”

There were easily bright spots sprinkled in throughout the year, if students chose to see them. Living in Lakeshore during the pandemic was an added bonus, Otchere and Gosenheimer said.

Smaller dorms and the ability to gather outside gave the duo some wiggle room to get a glimpse of normalcy. Both formed friendships and made memories — and the unexpected joys made everything worth it.

“Who you’re friends with and how you get involved is seriously everything,” Gosenheimer said. “It’s all about making the most of wherever you are with whatever you have.”

Both returning sophomores and incoming first-year students recognize the value of dorm life in facilitating these relationships, evident in an anticipated dorm overflow this fall. UW has about 8,500 students planning to live in the dorms this semester, compared to 8,000 in fall 2019. The rise in demand was driven in part by “high interest” from returning students, according to a UW news release.

To increase capacity, the university has devoted parts of The Lowell Center — a campus hotel — for freshmen housing, along with converting some residence hall spaces into triples and quads.

The changes have added more than 680 beds to campus housing. The overwhelming interest has also prompted the university to offer students the chance to be released from their housing contract with no financial penalty as administrators continue to prepare for “space challenges” this fall.

As the incoming freshmen prepare for this overflow, Gosenheimer’s believes his words still apply. The first-year experience is what one makes of it — though that doesn’t mean adjusting will be easy.

Out of the five students interviewed, three recovered from COVID-19 after they were infected while the others experienced a stay in the campus isolation dorms or were lucky enough to avoid infection entirely. All five students are either fully vaccinated or plan to be by the fall.

No high school senior dreams of having nasal swabs, lockdowns and vaccinations in their freshman year starter pack. But rather than pout, these five students believe the class of 2024 made the most of the experience.

“Whenever people tell me they feel bad for me that I had a horrible freshman year, I’m like, ‘You know what? I also don’t know anything different,’” Rietz said. “I don’t know what it’s supposed to be like.”

This year will be different — some may call it a return to normalcy. For portions of the class of 2024, the thought of something completely new is exciting, while for others it is terrifying.

No matter one’s stance, Louis thinks the lessons learned from the past year still apply.

“Even when we were given the shutdowns and everything else, we could find a light in it,” Louis said. “We could find something, find ways to make it fun and make it really our own unique experience of freshman year.”

Beyond the rising sophomores, all Badgers should buckle up. As the more-contagious COVID-19 delta variant takes up a stronghold in Wisconsin and the United States, some uncertainty still looms over the fall semester.

This is an uncertainty the class of 2024 is used to — and one Otchere said they should be prepared for come fall.

But even in the unknown, there is hope for a more normal year.

UW predicts that 96% of incoming dorm residents will be vaccinated by the time the academic year starts — a positive indication for the start of the semester. Chancellor Rebecca Blank also released a statement in June preparing students for a year which seems to closely resemble pre-pandemic times.

Beyond the concrete, students can envision and dream about what this year will look like. Camp Randall’s student sections will be packed with red and white once again. College parties and UW’s work-hard play-hard mentality will be back and hopefully better than before.

But no matter what is thrown at UW and the world this year, all students can always focus on what they can always control — their personal outlook.