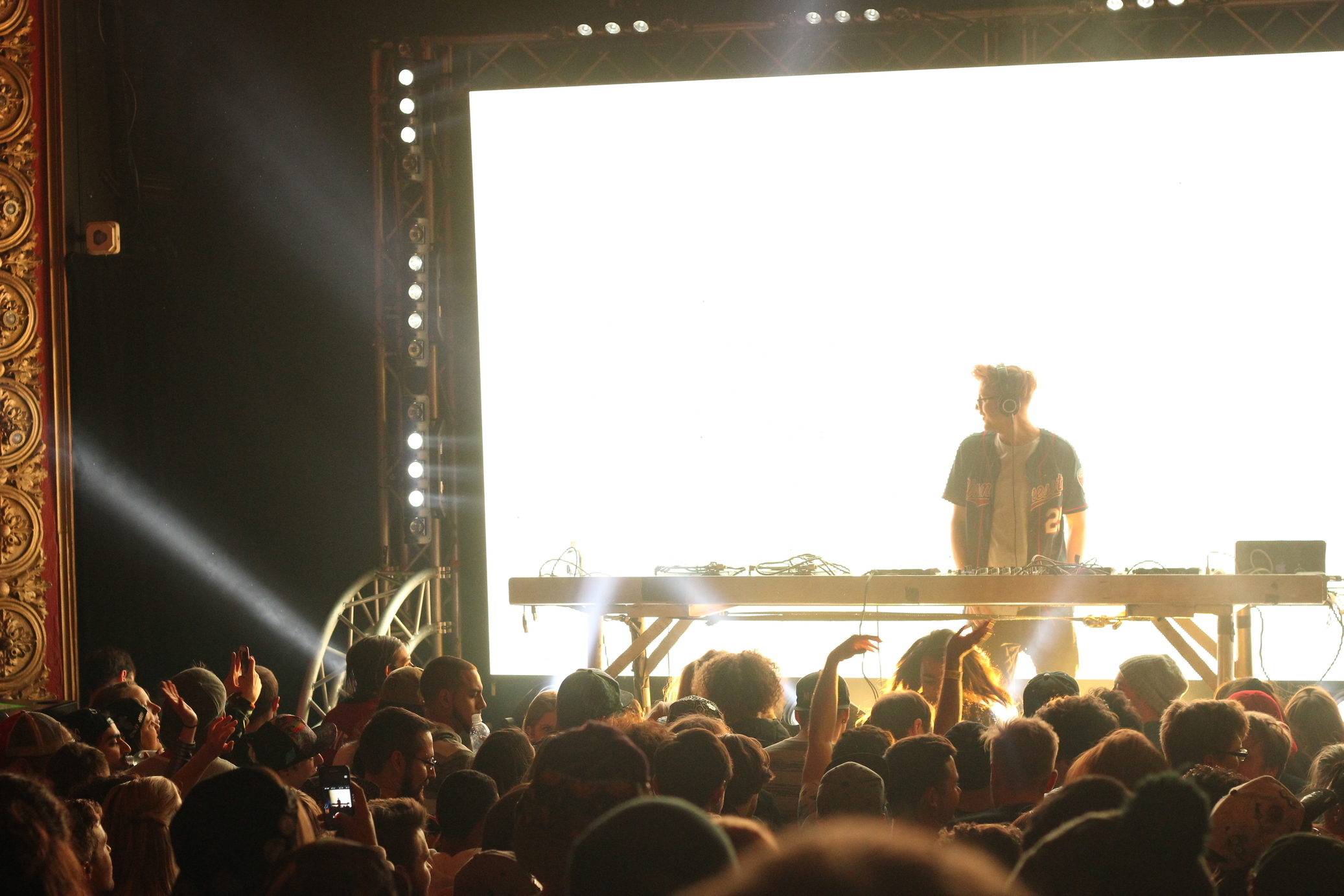 Upon arriving at Majestic Theater Friday to experience an evening of the “Adventures Through Time and Space” tour, audience members situated themselves scattered around the premise — not ready to reach the stage floor just yet. Though the theater was starting to get fairly packed, nobody wanted to be the first to make a move to the front.

That quickly changed as soon as Star Monster took his place behind the DJ table, and the music began.

Star Monster started off his set strong, setting the tone for what would be an intense, bass-heavy night. The dance floor began to fill up fast as listeners banged their heads along to the beat and moved their bodies anyway that allowed them to feel free. 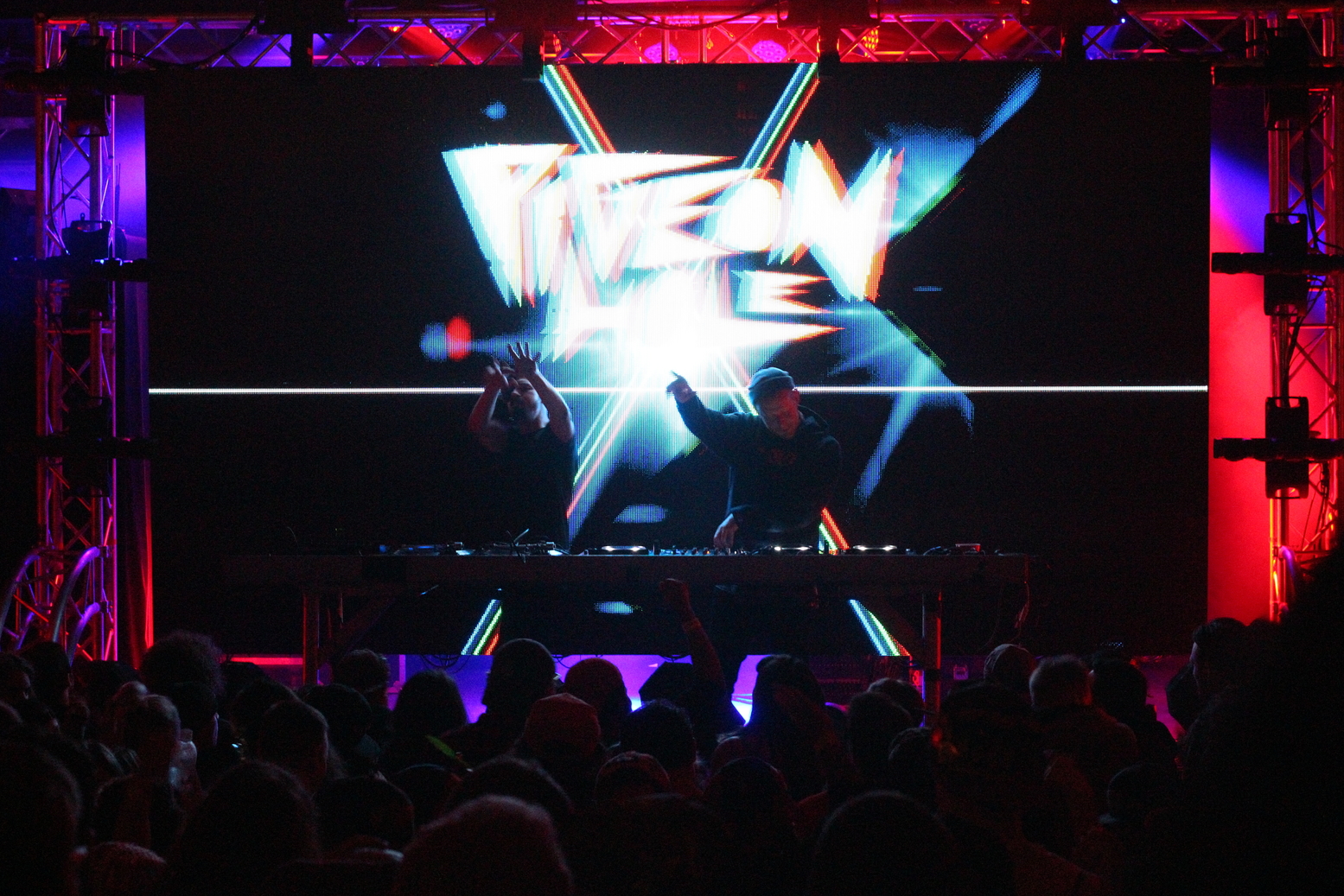 Next up was Pigeon Hole, a hip-hop, bass duo from Vancouver Island, Canada. Thanks to their clever rapping capabilities, they were able to perform their vocals live on top of several tracks — providing a set that deviated well from the standard DJ performance.

Since the debut of Minnesota’s music label, Outer Realms, Pigeon Hole is the only group they’ve done a release with thus far.

Friday night was the duos first time performing in front of a Madison audience, and they weren’t the only ones. Australian native Zeke Beats followed for what would be his first exposure to the Wisconsin music scene. 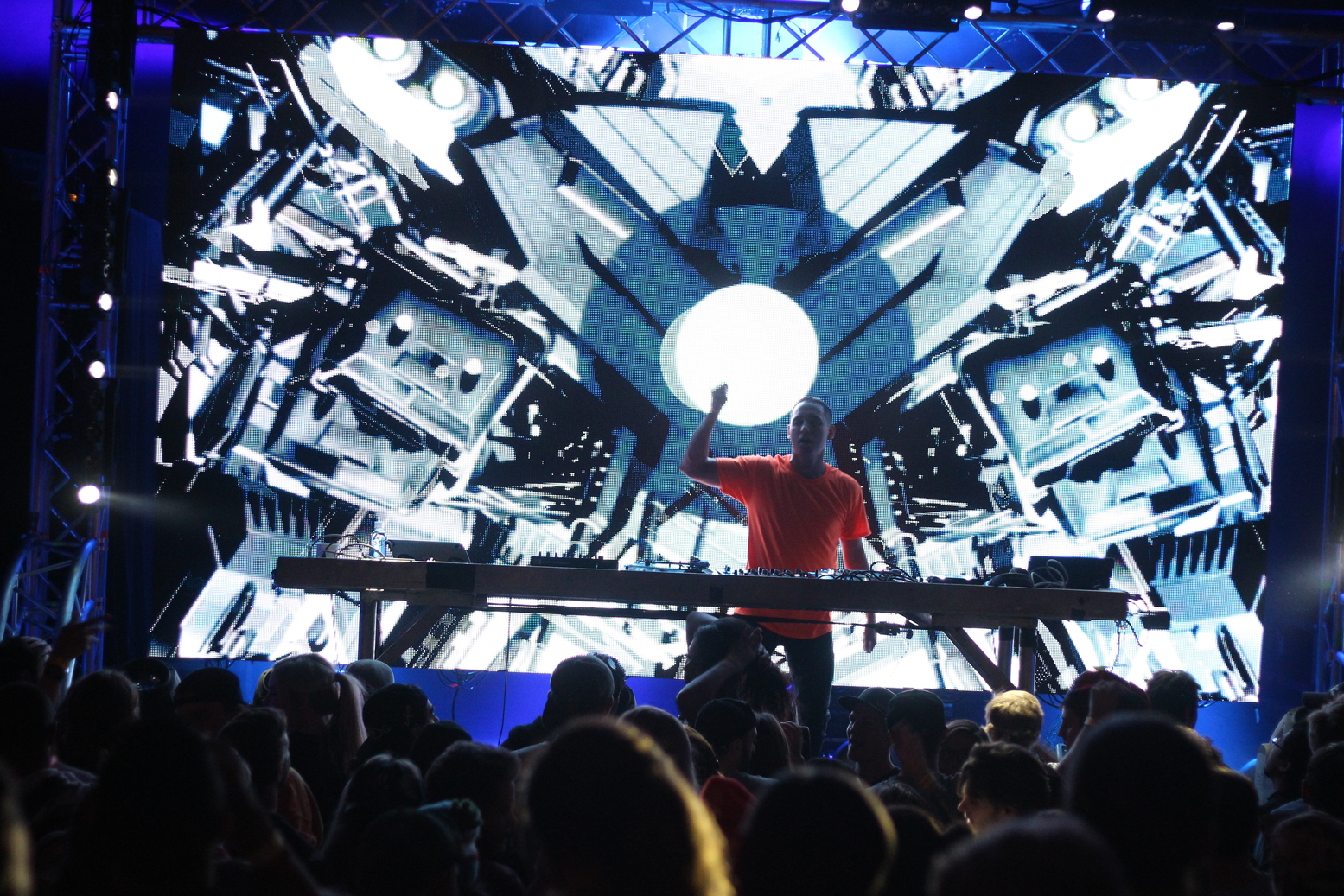 Each of these sets seemed connected somehow, but some might have solely felt this connection while others in the audience could literally see it.

Many of the visuals on the “Adventures Through Time and Space” tour share a common aesthetic which relates to its name. Imagery of galactic stars and astronauts floating through space are just a couple examples of the atmosphere the audience was pulled into.

“Doing this tour I was really focused on the visual side of things,” Minnesota said. “Probably since June or July, I’ve just been working on the visuals for the tour so I haven’t had a chance to work on music in a while. Once December is done and the tour is completely finished, I’ll finally get to sit back in the studio and work on music which I’m very excited for.”

New and old fans alike came out to watch Minnesota’s set, forming a packed house by the time he came on stage after midnight. Keeping up with the intensity that preceded his set, audience members truly felt good vibes pulsate through the Majestic all night long — and the bass hit even harder. 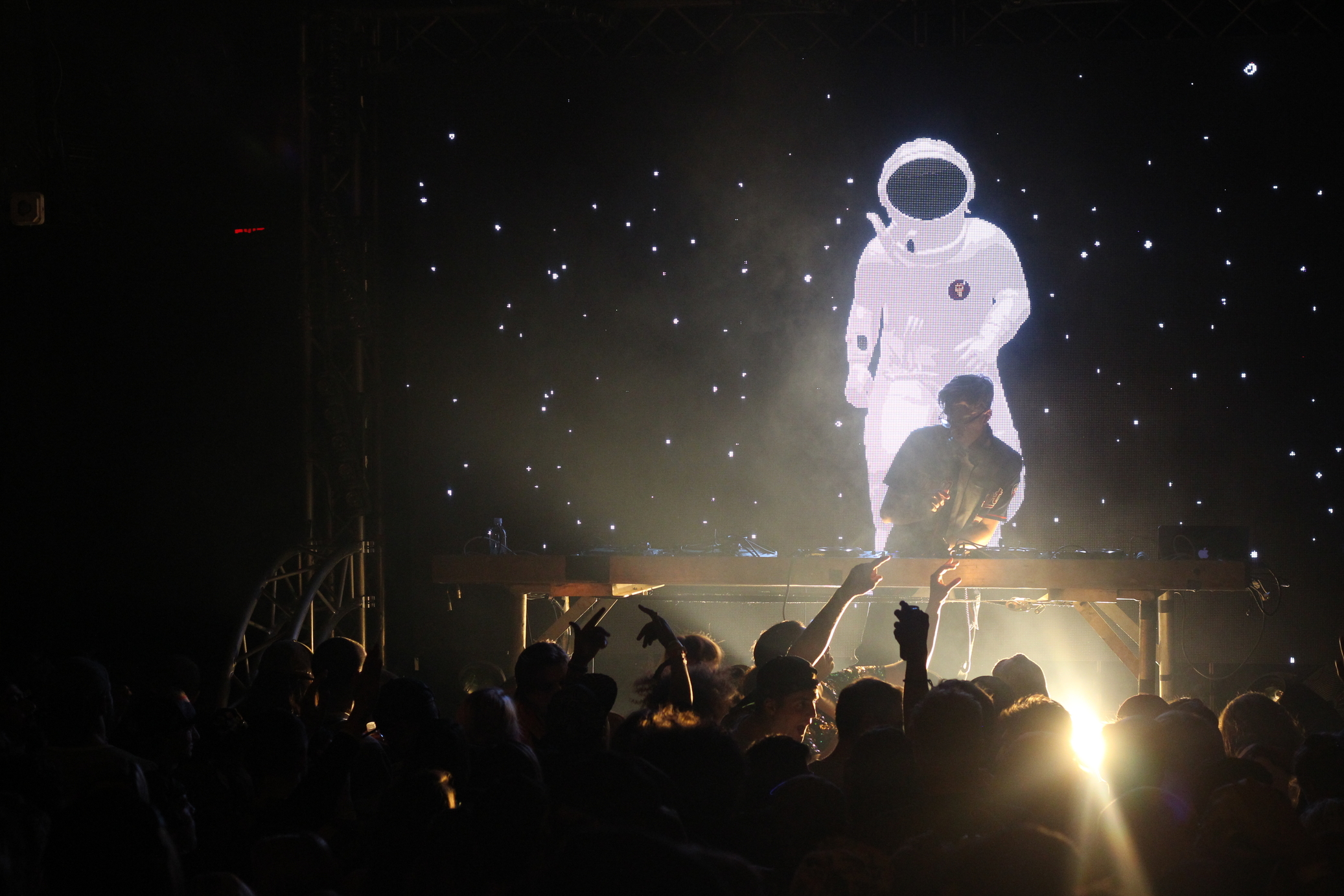 An astronaut floats around in space behind Minnesota working on his equipment.
Hazel Tang/The Badger Herald

The beats and visuals were accompanied by mesmerizing lights that brightened the theater and audience members alike. A set of revolving lights outlined the visual screen, making an outstanding addition to each set.

Minnesota played a mix of songs from the past and present, and kicked off his set with the well-known hit “HiLow.”

But the producer wasn’t always on a pathway that would lead him to dropping the bass as well as he does now.

“I was trying to play in bands while living in Santa Cruz, Calif.,” Minnesota said. “It was so hard to find four or five like-minded people that really wanted to do music professionally, so I got on my computer, downloaded some software to produce and realized I could kind of do it all by myself.” 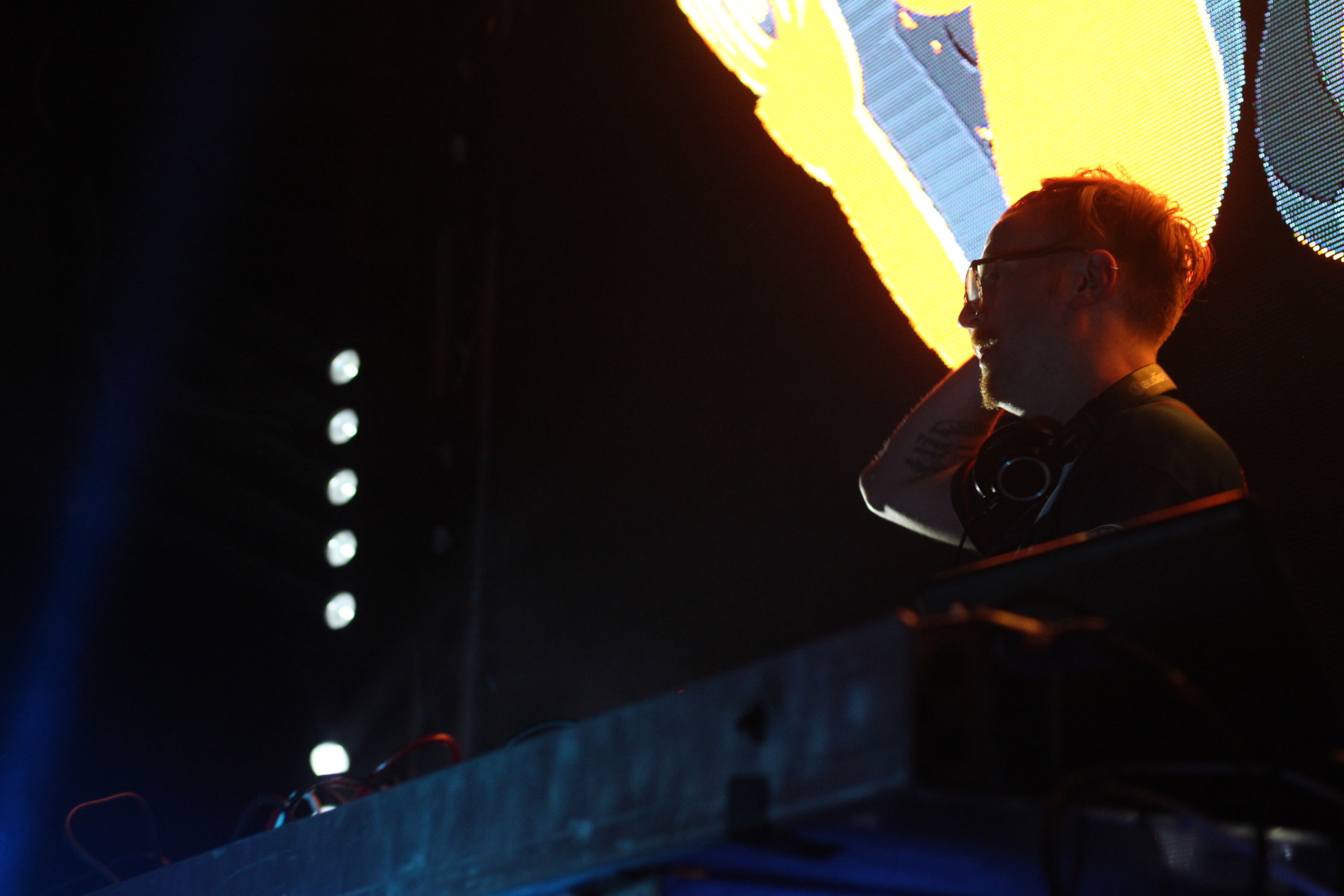 Minnesota looks up at the audience.
Hazel Tang/The Badger Herald

He was introduced to the wonders of the electronic music scene around 2009 when people in Santa Cruz would throw parties in the woods called renegades. At these parties, people would bring generators and DJ equipment into the woods and party until about 6 a.m. — similar to the essence of any extensive EDM festival.

It’s encouraging to think about the experiences that brought acclaimed name Minnesota to notoriety, because even his journey to the career he has now was not a straightforward path.

“Usually when I sit down, the best music comes from just letting it flow naturally and not forcing anything,” Minnesota said of finding his inspiration to sound. “So I let whatever I can come out and see what happens.”

Following the end of “Adventures Through Time and Space,” Minnesota plans to get back to what he knows how to do best — making music.

For any further questions regarding Minnesota, he’s created a Reddit page, giving fans all the answers to anything tour, label or life-related.