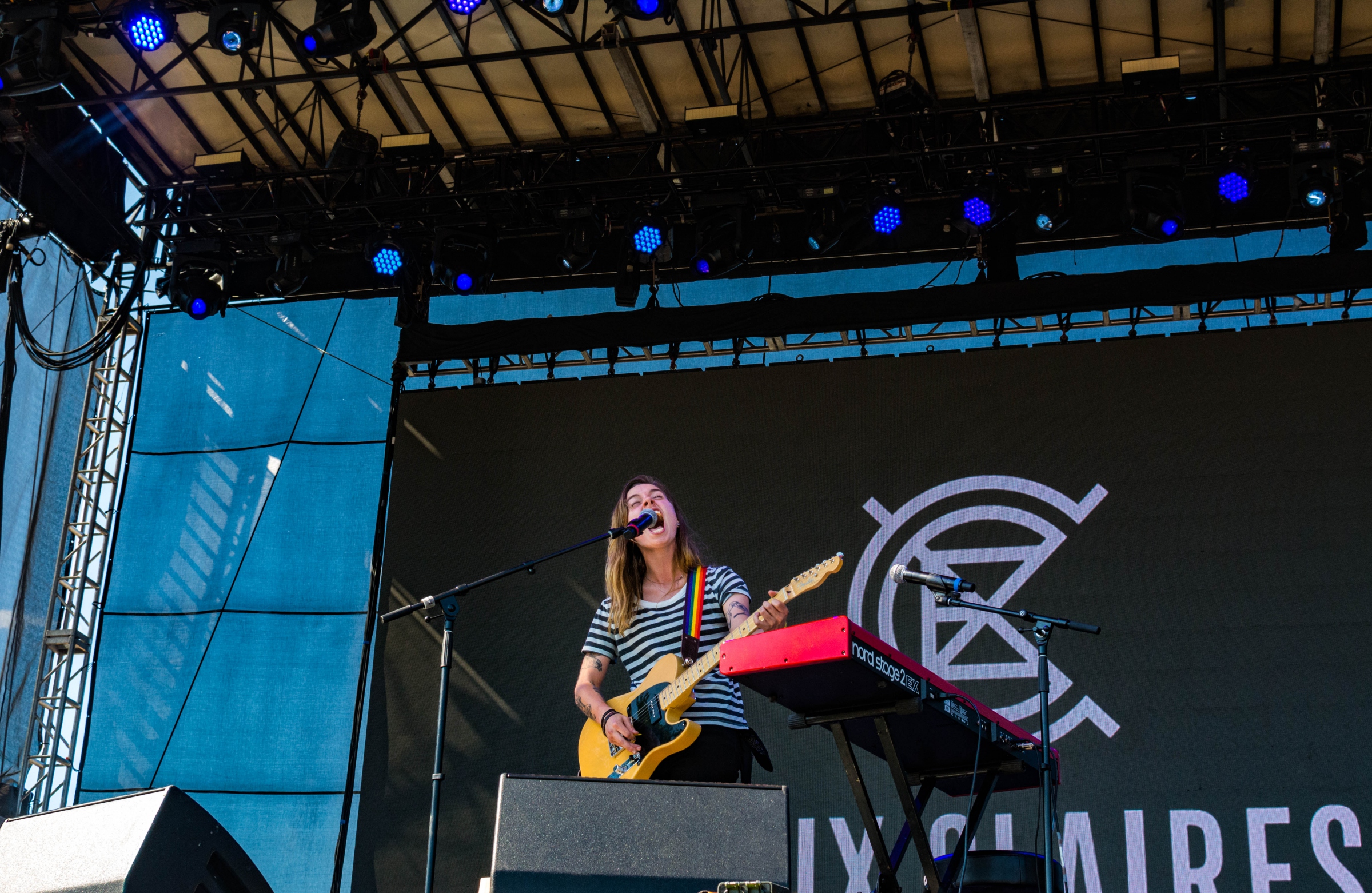 Eaux Claires prides itself on being a culmination of people coming together for something greater than themselves. This year, the indie genre found sanctuary in the middle of the dairy state a month earlier than the usual August gathering.

A pilgrimage up and down a steep hill left thousands waiting in anticipation for the push notification about who would perform over two days at the music festival. A roundtable of correspondents, including Henry Solotaroff-Webber and Marko Uzeirovic, shared their experience from Eau Claire. 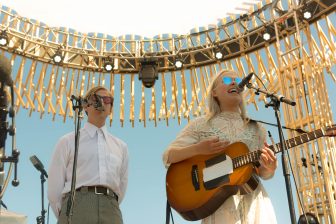 What performances made the festival worth the price of admission?

HENRY: For me, the performances that made the trek to the Chippewa Valley more than worth it were not necessarily the biggest acts. Indeed, it was the acts, big or small, that embraced the collaborative and interdisciplinary aesthetic that Eaux Claires is known for that bowled me over. A smaller name which embodied this for me was rapper/singer serpentwithfeet.

Wielding a single red pom, the Harlem native sashayed and skulked across the House of IV stage while he sang cuts of his recently released seedless LP. Swp’s music already hits the perfect sweet spot between hip-hop and R&B, but what carried his performance over was his charming and insightful commentary between each song on his own background and topics like how society conditions male-identifying folks. 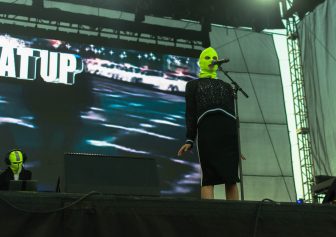 He later brought out fellow performer Moses Sumney, for what was an exceptional and mostly improvised collaboration of two of the most dynamic, young voices today.

The highlight of the festival for this correspondent, though, was Julien Baker’s set at the big Lake Eaux Lunes stage. The Tennessee songwriter’s 2017 LP Turn Off The Lights, established Baker as one of the best talents in indie rock. Sparsely arranged but laden with emotions and thoughts, Baker’s songs filled the stage, the trees and all the surrounding open space with sentimental and sensual airs. 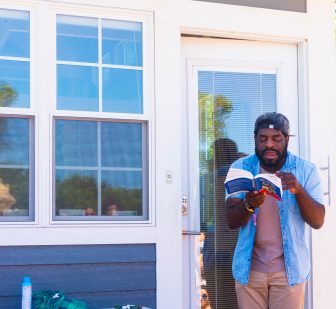 Imagine then, the scenes when Baker invited on stage writer/poet Hanif Abdurraqib, one of the artists-in-residence for the festival. The two mixed together “Seatbelts and Sunsets,” with Abduarraquib’s very essay in response to the song. The pair traded verses, with Baker and a violinist scoring Abdurraquib’s reading and Abdurraquib respectfully bowing down while Baker sang hers. The poignancy of their performance was and is nigh indescribable, but could be best states as a tearjerker at the bare minimum.

BEN: It wasn’t until Saturday afternoon the festival was worth the price of admission. By the time The National were done, it felt like highway robbery.

What Matt Berninger lacks in vocal consistency, he makes up for in genuine and mind-shaping lyricism, seen on tearjerkers like “About Today.”

Matched with a stage presence only a lead singer of a veteran rock group can possess, the frontman screamed lyrics into drummer Bryan Devendorf’s face before taking his hat and strutting around the Flambeaux gazebo. Powerful 2017 smash “The System Only Dreams in Total Darkness” got Berninger walking into the crowd — only two rows in front of me, before hopping back on stage for his drink and inhale from his Juul. He took each inhale in awe of the masterpiece he let ride as the pairs of twins melted the Flambeaux stage through inflicting rhythm from their guitars, drums and the accompanying brass. 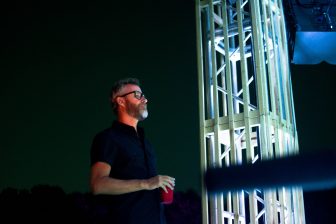 MARKO:  In each of my four years attending, moments in which I’ve been able to feel a sense of empathy for those standing next to me kept me coming back to the Chippewa Valley.

This year, the artists that evoked that feeling in me and made my return worthwhile were Julien Baker, Moses Sumney, The National, Low and Dirty Projectors. Julien Baker performed on the Lake Eaux Lune stage — the only stage that felt like a traditional festival stage. She filled the grounds with her powerful vocals and poignant songs. Likewise, Moses Sumney brought a similar atmosphere to the Lake Eaux Lune stage on Saturday.

Low and Dirty Projectors performed at Oxbeaux – an intimate wooden stage in the woods. David Longstreth performed an acoustic solo set primarily consisting of songs from the group’s upcoming album. Low played in the forest at midnight to a hundred or so people in an immensely heavy set. 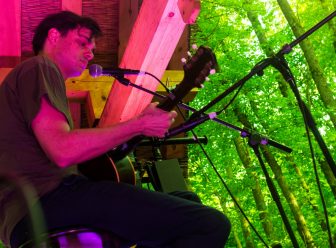 Finally, The National performed at Flambeaux – a round stage that Matt Berninger joked about being inspired by Close Encounters of the Third Kind. The indie rockers played a set filled with collaborations ranging from Chastity Brown to Julien Baker. The group closed their set with help from the audience by performing “Vanderlyle Crybaby Geeks.”

The members left their instruments behind and moved to the edge of the stage and sang out with the crowd in the most Eaux Claires moment of the festival. A few thousand people circled the stage singing along with their favorite band coming together as one voice, or as Michael Perry would say, “a confluence of souls.”

Were you disappointed by the surprise lineup?

MARKO: I think it’s tough not to be. Eaux Claires built an immense amount of trust and support from their fans — enough to the point that calling this year’s festival a “family reunion” didn’t feel like a painful marketing tactic promoting a false sense of community, but rather a genuine call to come together once again. That’s why it felt like a betrayal of trust when Justin Vernon Tweeted about a Sufjan Stevens appearance as being part of the plan. 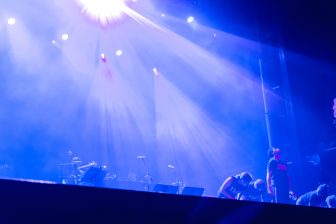 There didn’t seem to be a reward for trusting the festival, and it seemed clear that many people didn’t, as the festival grounds had a fraction of the attendees that previous iterations brought. I wanted to believe in the surprise lineup. I had no reason not to trust Justin Vernon and Aaron Dessner, as they always came through with a meaningful weekend when I thought they couldn’t top themselves. This year, unfortunately, I don’t feel with what the spark that years one through three left me long after I left.

BEN: It’s hard to be disappointed when you don’t know what to expect. Aside from Chicago deity Noname and the voice of Eaux Claires himself, I had never heard any of the artists I saw in Eau Claire. As a novice to the various indie sub-genres, groups like Low, Wye Oak and The National, or solo powerhouses like Julien Baker were a breath of northern Wisconsin air. Geniuses like Moses Sumney and Kevin Morby allowed their impressive vocals lead strong supporting bands on the Lake Eaux Lune stage. 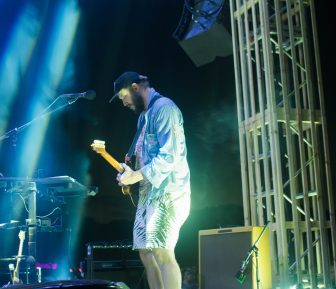 The only disappointing performance was the David Longstreth Friday evening solo set in the woods. With a plate of food in hand, I wasn’t complaining. Perhaps nervousness over the quality of the sound for those standing amongst the furthest trees led Longstreth to miss notes in his first series of songs. A strong finish was ironically missed by many as a couple hundred were reduced to maybe 90.

What did you take away from the art installations?

BEN: A small hut made from sticks meant little and vulgar writings on leaves left much to be desired, but the flat doorway that led to a military-designed bunker was a diamond in the rough. Walking up to a reggaeton DJ set not listed in the lineup with a few dozen packed in a small portion of the forest was a fun contrast from the rest of the festival. Shabba Ranks remixes on a Friday afternoon made the mosquito bites fly away. 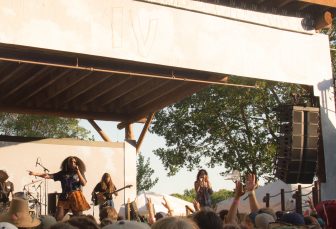 MARKO: In Eaux Claires III, the focus shifted to impromptu collaboration with artists in residence and a museum worth of art installations in the forest. Each year brought some installation or idea in the forest that stuck with me. Last year it had a living room replica in the forest where people could take a photo. It felt like an examination of the American Dream, showing something seemingly perfect that can’t escape its own hollowness surrounded by the beauty of nature. It wasn’t anything new or original, but it felt inspired.

This year the installations in the woods included a hidden DJ tent, a replica of the Jannette (the piano used on 00000 Million), chimes, balloons and grass with phrases written on them. None of these brought me a sense of curiosity, and just filled up some time I had between sets. The Flambeaux stage, however, felt truly special, and it was something I wish more artists were able to use the way headliners did. Most artists used it as a standard stage, but The National was able to capture the beauty and communal message behind the stage more than any other group.