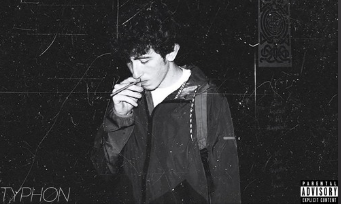 On some of the tracks of Madison local Typhon’s debut LP Theology, he does just this, often spitting over contemporary trap beats with a contemporary mindset.

The album kicks off with “Pen Cold,” a track that could have been released in the ’90s — and had it been, it would have aged like a fine wine. On the song, Typhon spits an airtight flow, bragging on the hook that everyone know “my pen cold,” and then proceeding to back it up over the length of the track.

On the next song, he quickly transitions to a Chicago trap-beat on “Get It,” proving he’s a rapper that can do both old and new. Alongside two of his peers, RED 608 and Mar Mar, he brag raps about all the stuff he’s getting and all the people who want to “Get It.” It’s typical masculinity-amped dick-wagging, but it sure sounds smooth.

These two tracks set the course for the rest of the LP.  On some tracks, like “Typhon Freeverse” and “All Over,” Typhon goes in on tracks that could be a decade or two old, providing listeners a nice dose of nostalgia while also exhibiting strong technical skills and a faculty for witty, if not slightly cocky, bars.

The rest of the 15-track, however, is filled to the brim with trap beats. While Typhon always raps proficiently over all of them, the album does suffer listening fatigue after the seventh time a trap snare pattern is heard.

On future projects, Typhon will do better to experiment more with the type of beats he raps over. He has the type of flow that’ll sound good over any type of production, and he should pull more from what hip-hop currently has to offer.

“Change Up” is a good example of this. Though it’s another trap beat, it features an intriguing and grim synth pattern that richly emphasizes Typhon’s lyrical themes of political unrest.

This is a strong first showing from an emerging emcee, and it’ll be exciting to see what he kicks up in the future.