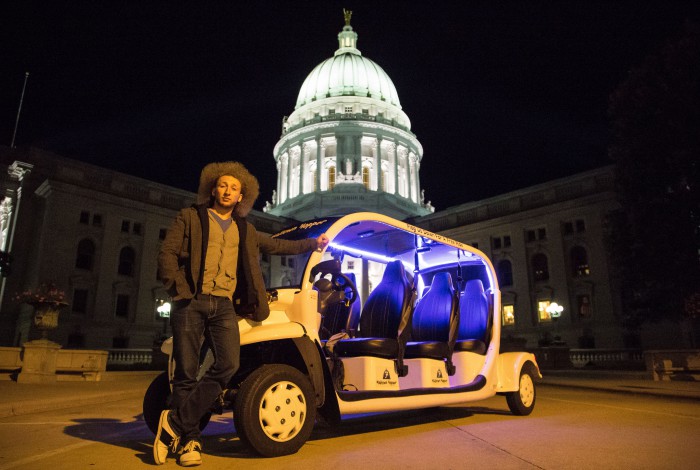 It’s 11 p.m. on a Monday night and Amir Morning has just pulled up in front of my house. He blasts Avicii as he fusses with the neon lights that line the inside of his Madtown Hopper, a small electric car used to give free rides to people in downtown Madison. We introduce ourselves, and he checks to see if the clothes I’m wearing are warm. He looks like a man who’s been transplanted from the streets of Paris: His clothes are fashionable and tight-fitting and he smells strongly of quality cologne. He looks good, but he also looks warm — an attribute that will only increase in importance as the night drags on and temperatures plummet into the low 40s.

We drive to the State Street area, and Morning cranks the music loudly. He tells me he’ll often turn up the Hopper’s music to get people to notice the vehicle. Tonight is a Monday, so State Street looks like a ghost town. Because he’ll be getting less business tonight, he proactively parks himself in front of areas with the most people. Naturally, he begins at Madhatters.

A man named Derek stands outside the bar, visibly intoxicated.

“What the hell is that?” Derek shouts.

“Fucking free? I’m fucking with y’all,” Derek says. He gets in the Hopper.

Derek says something about going to the Capitol Square area, and Morning heads in that direction. Along the way, he picks up a couple walking home. They both wear backpacks and appear to be entirely sober. Derek’s presence is the complete opposite of theirs, but the loud music drowns out any potentially awkward social dynamics.

Morning drops the couple off near Butler Street. As he drives around the Capitol, blasting Skrillex and changing the setting on the Hopper’s LED lights to “strobe,” it becomes very clear that Derek has no idea where he’s going.

“Where do you wanna go?” Morning asks.

So, after a 10-minute ride, Derek gets dropped back off at Madhatters. Derek asks how much he owes Morning. Nothing, Morning says, because it’s a free ride.

Morning first got the idea for Madtown Hopper while on vacation in Miami. He saw the same car being used to transport tourists around South Beach. Inspiration struck.

When Morning came back to Madison, he and his girlfriend began planning a ride service that would utilize these electric cars. The couple had trouble deciding how they would differentiate their company from the other cab companies operating in the Madison area, as well as newcomers like Lyft and Uber.

Morning found inspiration from a TED Talk by Amanda Palmer, the lead singer of The Dresden Dolls. After a concert, a man offered Palmer a $10 bill, saying he felt bad because he had gotten all of her music from a friend, for free. Shortly afterward, she decided to release all her music for free, allowing fans to donate if they wished. She crowd funded a studio album and made $1.2 million by asking people to pay rather than forcing them to.

Morning came up with the idea of a free ride service. Instead of forcing people to pay for a ride, he’d let them pay if they wanted to.

He and his girlfriend bought two Hoppers, hoping to operate both in the downtown Madison area. The two worked with Ald. Scott Resnick, District 2, and Ald. Mike Verveer, District 4, to create an ordinance for the operation of low-speed vehicles like the Hopper in downtown Madison. Her father was troubled by his daughter’s ideas, questioning how they would make money from the service and calling Morning an idiot, Morning said.

“Nobody wants to hear that when they’re passionate about something,” Morning said.

Her father made her sell the Hopper she had purchased. She ended up selling it to Green Cab, a company that had become Madtown Hopper’s main source of competition. Green Cab offered to buy his Hopper and allowed him to bring his free ride service to their company. Morning had invested his life savings in Madtown Hopper, and he refused to give up so soon. He declined the company’s offers. (According to a Capital Times article, Green Cab General Manager Phil Anderson said they never offered to purchase Morning’s vehicle or give him a job.)

This ordeal sparked the beginning of an ongoing tension between Morning and Green Cab. It also marked the end of he and his girlfriend’s relationship. Morning was now the sole operator of Madtown Hopper.

Amir Morning was born in California, but because his father was an international businessman and had an absent mother, he was raised overseas in Syria, Ukraine, Russia, Spain, Egypt and various other countries. He attributes his idea for Madtown Hopper to his worldly upbringing.

“Without me traveling, I would never have had this idea. You see things in different countries that you don’t see where you’re actually from,” Morning said. “If you only know one thing, you can only know so much. Your imagination can grow by seeing different things. It changes your idea of how people live and how people survive in different places. I think that’s very important for being a part of a change in your own community.”

So far, that change has manifested itself in free, safe rides for people in downtown Madison who might otherwise not be able to make it home safely. Morning now operates every night of the week, saying that if he were to take a night off, he would feel guilty thinking about people who might need a safe ride home.

“There’s no way for me to shut it down on certain nights because it’s easier for me or it’s cheaper for me. I know I’m going to get phone calls from people who are drunk and need help, and I’m not going to be able to sleep that night because I wasn’t able to help them out,” Morning said.

Morning and I finish an interview by the Capitol, and a couple walks up to us. They begin asking questions about the brightly-lit vehicle currently playing Backstreet Boys’ “I Want It That Way.” Morning tells them to hop in.

We begin asking them questions. Their names are Mark and Lisa. They’re from San Francisco, and they’re in town on business. Lisa made Mark try tequila shots for the first time ever tonight. They’re both very drunk. “I’m a shot virgin,” Mark says. “What even is tequila?”

As we drive to the Campus Inn, where they’re staying, Morning plays Disclosure’s “Latch” for the third time in two hours. Mark and Lisa howl like wolves in the backseat as Morning whips around corners. He looks in his rearview mirror at the couple howling with joy. He cracks a smile.

Morning drops the couple off and Mike attempts to give him a $20 bill. Morning tells him to keep it and give Madtown Hopper a “like” on Facebook. He gives Mike his number in case he needs another ride home while he’s in town. They thank Morning and enter the hotel.

As I ride along with him, I watch Morning turn down numerous tips. By the end of the night, he’s made about $5.

Morning says he turns down tips because he wants people to know they don’t have to pay for his service. If someone insists he take a tip, he will.

“The only reason why they pulled out money in the first place was because they felt that they needed to pay,” Morning said. “Some people will say, ‘Are you sure?’ As soon as they say ‘Are you sure?’ I right away learn that they probably don’t have that much money and they kind of need it. So I say, ‘Keep your money, go home, have a good time and be safe.’ If they have to ask if I’m sure they can keep their money, then they’re pretty much asking me if they can keep their money.”

Morning tells me his primary goal right now is to get the word out about Madtown Hopper rather than make money. In the future, he hopes companies will sponsor his company and advertise on the side Hopper, which he’ll be installing doors on when the cold winter months arrive.

“I’m hoping to land big companies like Red Bull, Coca-Cola,” Morning said. “I’m up for alcohol companies, promoting social responsibility — drinking responsibly and riding responsibly. I think there’s a lot of synergy in that: promoting a company that sells alcohol but also stepping up to offer free rides to people who are drinking their products.”

With enough advertising revenue, Morning hopes to hire drivers (who will be able to keep tips in addition to a fixed income), purchase more cars and expand his service across the United States.

“My dream is to have it on every college campus in the U.S.,” Morning said.

For now, Morning has developed a cult-like following among people who frequent downtown Madison bars. People shout his name from sidewalks. He gives high-fives to passersby as he drives down State Street. He has regular customers who have begun to utilize him as a regular form of transportation. He allows customers to call his cell phone for rides. When a customer requests a ride, he’s usually able to pick them up within five to 10 minutes. Morning now receives about 80 calls a night on weekends. On these weekends, he usually ends his work night at 4 a.m.

While we’re still out, Morning gets a call from Sergio and Kenneth, two UW students who work for SAFEwalk, a service that provides walking escorts for students after dark. They’re all done for the night, and they’re looking for a ride home.

Sergio and Kenneth acknowledge the irony in giving a safe ride to SAFEwalkers, then offer their praise for the service.

“I love the Hopper. It’s my favorite way to get home on any given weekend,” Sergio says.

“The Hopper is the most clutch ride in Madison. Way better than the [Metro Transit route] 80,” Kenneth says.

For people like Sergio and Kenneth, Madtown Hopper has become an essential tool for getting around quickly and safely after dark. Morning is proud to be known for this.

“It’s kind of a Robin Hood thing,” Morning said. “I’m taking money from the big companies and providing a free service for people who don’t have money, like broke college kids.”

Morning and I end our night together by driving three girls from Vintage to their home on Butler Street. We pull up in front of their house and they invite us inside. Morning hasn’t received a call in more than an hour, the streets are dead and it’s uncharacteristically cold for a mid-September night, so we go inside. The girls give us chocolate cake and hot tea. We all sit around for an hour, talking about life.

As our conversation ends, Morning says they’re some of his favorite customers. The girls object to this label.

They give him hugs, and Morning and I step outside into the cold night. He drops me off at my house. I walk into my front door and hear loud EDM slowly fading into the night.