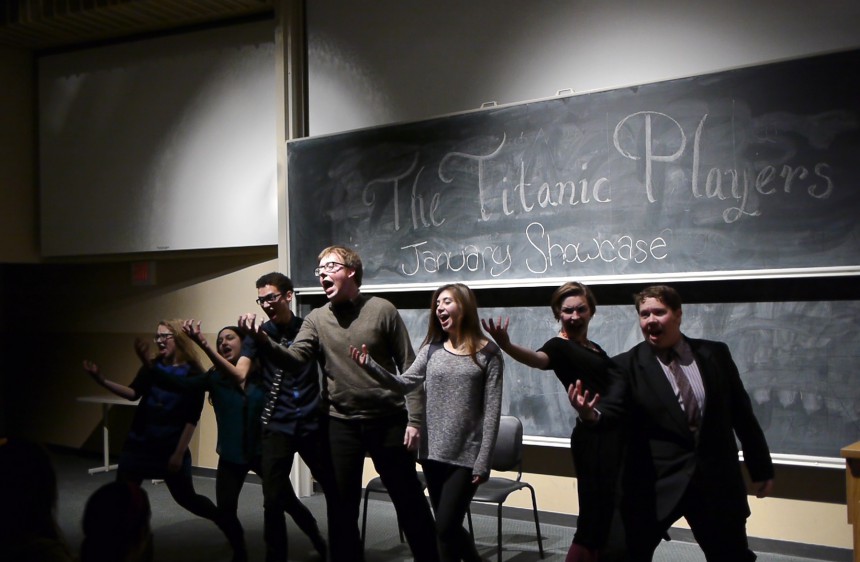 “You need to think about how you want your scene to end from the beginning. Think about the wrong that needs to be righted in your scene. Make your teammates look really good. Support them. Do not let them fail. If you let them fail, it’s because you’ve failed.”

Coaches Kathleen Mallett and Ben Heins hope to drill this into the brains of the first-year members of the Titanic Players, the only long-form improv group on the University of Wisconsin campus.

The severity of the coaches’ pep talk is met with a saucy roar of sarcasm and whimsical clamor from the seven newest members of the Titanic Players. It all has to be taken lightly. There’s no room for austerity. Not before a show, at least. Rather, in these short moments before they take the stage, members of the Titanic Players are found goofing off with one another and engaging in various comedic jests. They are loud, energetic, rambunctious and playful.

Taking turns exchanging character exercises, the players seem to lose themselves in the ritual magic of preparation. They’re having so much fun; it’s almost as if they’re already on stage. They don’t just skirt along the surface of ridiculousness, they dive right into it. It’s that same level of comic vitality that is found in their performance.

The Titanic Players are one of the largest collegiate improvisation groups in the country. Founded originally at Northwestern University, the Titanic Players pride themselves in performing long-form improv shows at seven other universities around the Midwest. Interestingly enough, the Titanic Players in Madison were the first to be established outside the grounds of Northwestern. Here at UW, Titanic has up to five teams performing in a single season, basing each team off member year-of-entry. They hold auditions for new first-year members every fall, hoping to preserve the tradition of Titanic and maintain a thriving improv community. Titanic showcases all of its teams in every performance, which occur about once every month.

For those unacquainted with long form improv, the Titanic Players open the show by taking a single suggestion from the audience. For approximately half an hour, The players resourcefully use that suggestion as the basis of their show. They attempt to create a cohesive narrative replete with various scenes, characters and conflicts. And yes, it’s all improvised.

The first-year players take the stage. Each team has its own unique name.

“Hello, we are Goldfish Owner! May we have a suggestion, please?”

“Umbrella!,” someone in the audience yells.

“I heard ‘umbrella.’ Umbrella. Thank you!”

With no further preparation, they begin their show. Everything is built off of that one suggestion – umbrella. For around 30 minutes, character after character, scene after scene, the Titanic Players rely heavily on the extemporaneous creation of a narrative to drive the various plots along. Specifically, coaches Heins and Mallett teach the Players to focus more on the individual stories rather than the comedy itself.

“We believe comedy is the result of truth and spontaneity. We work on creating fulfilling and realistic relationships within scenes that drive the narrative forward. Comedy is not something we work on specifically. Everyone is already funny. The humor comes naturally,” Heins and Mallett said in an email to The Badger Herald.

For the Titanic Players, a genuine story is what begets the most laughter. Humor is simply a by-product, a pleasant result of the dynamic characters and conflicts that emerge from the story.

But there’s a more important theme at Titanic’s core: teamwork. To Ethan Jesse, one of Titanic’s newer members, there is nothing more essential.

This principle of group unity and teamwork resonates powerfully with each of Titanic’s members. They all keep coming back to that same concept, grounded in a sort of enigmatic “groupmind” that propels their performances. Members Sam Gee and Jacob Guzior agree.

In something so team dependent as long-form improv, there’s no time for individual glory or self-aggrandizement. Often times, this wavering focus ends up leading a scene astray. Titanic funnywoman Zoë Devorkin stresses, “There is no such thing as a safety net in improv. There is no planned backup if something goes wrong. If the scene is going downhill, everyone is responsible for helping to right the wrong.”

Above all else, Devorkin believes in the importance of groupmind. But groupmind isn’t just about performance; it’s about what goes on off of Titanic’s stage.

“We all go to parties together, get lunch together and just chill. It’s vital to not just be a team, but to be best friends,” Devorkin said. Cultivating real relationships with teammates allows the Players to enhance the fake relationships on stage.

“We all love each other a lot and are super supportive of one another. We try to support everyone as best as we can,” Devorkin said.

The group’s intimacy rivals that of a family. They all just love goofing off; it helps them take their minds off of school and plug into a playful and welcoming environment. Perhaps that’s what enables their performances to be so seamless. Practice isn’t what helps them prepare. Rather, it’s the un-preparing, the forgetting of discursive thinking, that aids them in ultimate hilarity.