The Big Ten has become the laughing stock of NCAA men’s basketball world this season. That has been a commonly held opinion since the beginning of conference play, but is now more apparent than ever with the release of the first ever preliminary NCAA top 16 rankings Friday, which featured zero Big Ten teams.

To break it down, the NCAA committee’s rankings laid out what a 16-team tournament would look like if the season ended today. If the tournament were to start tomorrow, the Big Ten would not have a team as at least a four seed for the first time since 2004. That situation would certainly be a rarity for a conference that currently has two teams in the AP top 16 in No. 16 Purdue and No. 7 Wisconsin. 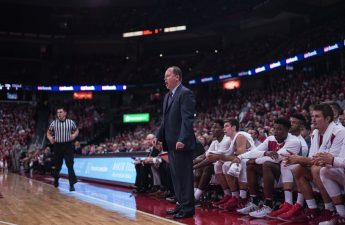 Men’s basketball: No. 15 Wisconsin must shake off fatigue to avoid home upset against Penn StateEthan Happ collapsed triumphantly to the floor near midcourt following the University of Wisconsin men’s basketball team’s overtime victory against Read…

Since the AP is forced to factor in overall record into their top 25 rankings, the Big Ten is bound to have at least two or three teams in the conversation right now, given the weak strength of schedule teams like Wisconsin and Purdue have to face at the top of a diminished conference. The committee, however, can use their own metrics to rank teams and have shown in years past the proverbial “eye test” means more for seed placement than just about anything else.

Wisconsin, sitting at 21-3 and firmly atop the Big Ten, carries the weight of the conference and is probably the only team that could sneak into a top four seed before Selection Sunday hits March 12. The Badgers, however, have done just about everything to hurt their national reputation outside of actually losing. UW’s three losses have all come against ranked teams in No. 8 North Carolina, Purdue and No. 23 Creighton.

Those struggles have shown up in the last month as Wisconsin barely scraped by rival Minnesota and four of the last six teams in the Big Ten, including taking last place Rutgers and Nebraska to overtime. With the eye test out the window for the Badgers, the question remains how they can prove themselves nationally with only one ranked matchup left for them in the regular season with Maryland at home.

The answer to that question lies in the motto of former Oakland Raiders owner Al Davis: “Just win baby.” Wisconsin is just 2-3 this season against teams in the top 50 in RPI, with wins over Tennessee and Minnesota, and ranks just 18 in RPI rankings, which illustrates the most obvious reason the Badgers are on the outside looking in. RPI factors in strength of schedule, and the experienced UW squad played only the 42nd hardest nonconference schedule in college basketball.

The good news for the guys in Madison and the Big Ten as a whole is the Badgers might finish the regular season with a single Big Ten loss and three overall losses for the first time since 1940, a season that ended in the program’s only national championship. The upcoming schedule for Wisconsin features one team on the road in the top 50 of RPI in Michigan State. The Badgers also don’t have to play Purdue while they play the two other teams in the Big Ten in the top 50 of RPI, Maryland and Minnesota, under the lights of the Kohl Center at home.

While Maryland and Michigan State are normally two of the most intimidating and challenging matchups in the conference, the Terps and Spartans are far from what they normally are. Both UM and MSU were top four seeds a year ago with coaches often considered some of the best in the sport, but are somehow struggling to even make the tournament this season. 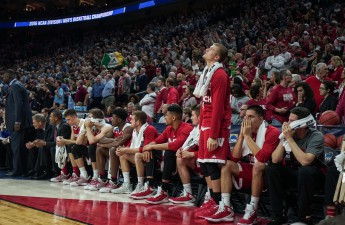 Men’s basketball: Why you need to get over Wisconsin’s heartbreaking defeatIt goes without saying that Badger fans were heartbroken following the team’s heartbreaking 61-56 loss Friday in the Sweet 16 Read…

In fact, the Big Ten featured seven teams in the NCAA tournament last season, tied for the most of any conference. Of those teams, Wisconsin, Iowa, Maryland, Michigan State, Indiana, Michigan and Purdue, not a single one made the Elite 8 and only three are considered in legitimate position to make the tournament this season. The regular blue bloods in one the sport’s best conferences are certainly bleeding, and the pundits are taking notice.

In ESPN Bracketology expert Joe Lunardi’s Friday bracket, five Big Ten teams made the cut but the Badgers and Boilermakers were the only teams better than an eight seed. While five might still seem like a good outlook for the conference given the downfall of the rankings, Lunardi has been known to overlook non-Power Five conference teams, and even the five he predicted are in question.

Looking even deeper into the conference’s despair, ESPN analytics revealed early last week the Big Ten is the only Power Five conference without a single team currently considered a lock to make the tournament. Even the Badgers, while not a top 16 team, aren’t agreed upon as a definite postseason team despite sitting at a projected two seed in the current AP polls.

The reason for the conference’s downfall stems from the programs right at the top. Indiana and Michigan State, two of the most historic programs in college basketball, and both ranked in the top 25 going into the year, sit at fifth or worse in-conference and are at a good likelihood of not making the tournament. IU hasn’t missed the tournament since 2013 and MSU hasn’t missed it since 1996, the third-longest active streak in the country (19), right in front of Wisconsin (18).

While the conference and its top teams have always shown a strong level of consistency, the committee has never really awarded those teams top seeds and has often underrated the conference. With an especially down year, however, it is up to Wisconsin and the bunch to pull some upsets come March.