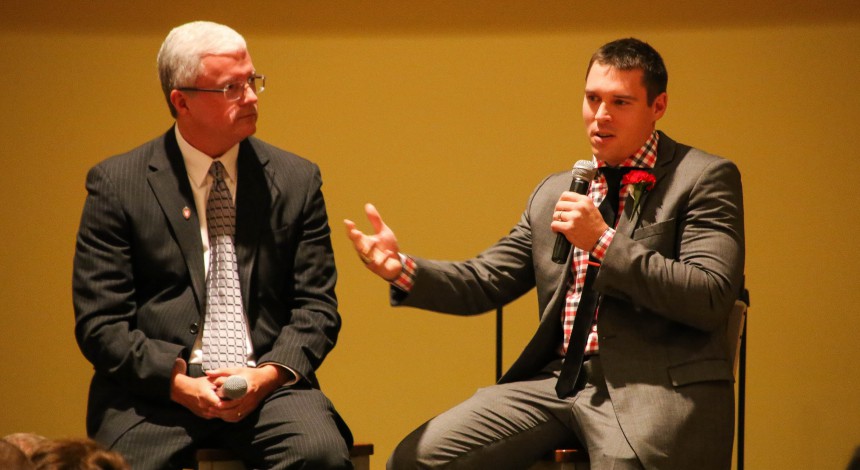 When Jim Leonhard and Devin Harris earned induction into the Wisconsin Hall of Fame Sept. 11, the similarities between the two jumped out, despite inherent differences.

Sure, they played different sports. But the impact both Leonhard and Harris left at University of Wisconsin is everlasting.

Leonhard’s story is the classic Wisconsin football model. A small-town kid works his butt off to earn a walk-on spot, and then a scholarship. For Leonhard, the next step was a prosperous 10-year NFL career.

Harris, a Wauwatosa, Wisconsin native, came to the Badgers basketball team highly regarded and started every game during his three years at UW. Harris left school a year early, skipping his senior season for the Badgers, to become the No. 5 overall pick in the 2004 NBA Draft a few months removed from being named the Big Ten Player of the Year.

And it can be said that both of their programs achieved future success because of their contributions.

For Leonhard, he feels his 2004 team, which won nine games, set the foundation for the next generation of Wisconsin football.

“To see where this program has moved in the last 10 years, it means a lot to me and my teammates,” Leonhard said.

And Leonhard’s teammates mean a lot to him. He went so far to suggest he felt like he shared the Hall of Fame honor with them.

“There’s so many guys that should be here before me, but it’s cool,” Leonhard said. “It’s such an amazing honor to go in this young too and have my whole life to be a UW Hall of Famer, that’s very special.”

The All-American safety has called Madison home since he embarked on his professional career. Every time Leonhard has come back, he said, he is amazed by the upgrades to the university and the athletic facilities.

It never crossed Leonhard’s mind to form roots elsewhere, even between all of the moving and travel during his 10-year NFL career that spanned six organizations in Buffalo, Baltimore, New York (Jets), Denver and Cleveland.

“The energy in this city is amazing,” Leonhard said. “It’s infectious. It’s something that you don’t want to leave.”

Leonhard hosts a football camp back at his high school in Tony, Wisconsin, every summer. He’s always maintained a relationship with the UW program to give back by meeting and working out with current Badgers.

No matter where Leonhard went, others noticed the values and lessons he learned at Wisconsin were apparent in him.

“It means a lot to say I’m a Badger,” Leonhard said. “And that carries a lot of weight all across this country.”

Harris has traversed the entire country throughout his NBA career. The guard began his career with the Dallas Mavericks, the team that currently employs him. In between his stints in Dallas, Harris played for the New Jersey Nets, Utah Jazz and Atlanta Hawks.

The work ethic Harris established under Bo Ryan has led to his longevity in the NBA, Harris said.

Out of all the accolades Harris received during his time at Wisconsin, his favorite memory is elevating UW basketball to the level of consistency it’s seen year in and year out, ever since he left.

“The fact that we took the program from kind of an unknown and built the foundation and made it into a powerhouse [is what I’m most proud of],” Harris said.

Had Harris stayed another year, he would’ve been on the 2004-05 team that advanced to the Elite Eight.

Leaving early hasn’t been easy on his conscience, since he knew what he was leaving behind.

“That was the hardest decision I’ve ever had to make,” Harris said.

The life of an NBA player is hectic and busy, so over the years, it’s been difficult for Harris to get back to Madison. He realizes his career is winding down, though, and hopes to return to Madison more often in the future than the decade since his departure has allowed him to.

And he’ll come back as a Wisconsin Hall of Famer, an accomplishment he holds in high regard.

“It’s up there,” Harris said. “Being from the state and staying home and doing things that I thought were never possible, kind of projected me into professional life. I couldn’t do it without coming here first.”