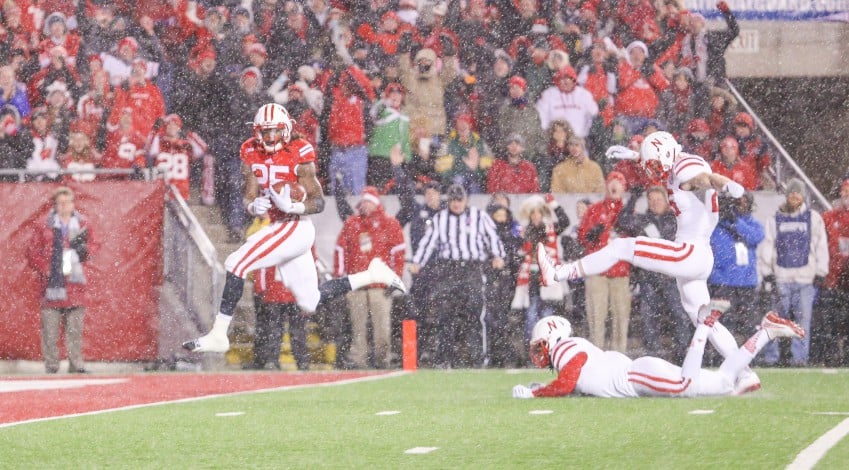 He waited for his turn to shine and that wait paid off for Melvin Gordon.

After one of the best individual seasons in Wisconsin football history, Gordon was rewarded for his efforts when the San Diego Chargers chose him with the 15th overall pick in the NFL Draft Thursday night.

SO PROUD TO BE A CHARGER

Gordon spent the first three years of his Wisconsin career behind two other marquee running backs in Montee Ball and James White, both of whom were taken in the NFL Draft in 2013 and 2014, respectively.

Both of those players congratulated Gordon on the heels of his accomplishment.

Congrats to my guy @Melvingordon25 !

With both Ball and White in the NFL, Gordon took the reigns of the rushing attack in 2014 and didn’t disappoint with 2,587 yards on the ground, the second highest total in FBS history. His breakout season, which also included 32 touchdowns, earned him a unanimous All-American selection and the Doak Walker award, while he finished as the runner-up for the Heisman.

His signature performance, which helped solidify his Heisman campaign and draft stock, came November 15 when Gordon rushed for a then single-game FBS record of 408 yards against Nebraska. 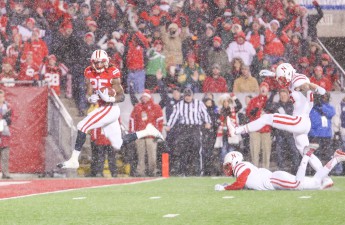 In that game against the Cornhuskers, Gordon also became the fastest player to reach 2,000 yards in a season in the midst of the career game. Gordon finished his Wisconsin career with 4,915 total rushing yards, the third most in Wisconsin history and sixth-most in Big Ten history despite playing only three seasons after he redshirted in 2011.

Although Gordon’s single game rushing record was broken just a week after he set the new high, he still managed to set another record along the way with the FBS record for yards per carry at 7.79.

All those accolades and the on-field ability of Gordon led him to be the highest drafted Badger since Ron Dayne was taken 11th pick of the 2000 NFL Draft. Despite Wisconsin’s history of churning out elite running backs, the Badgers have yet to have a running back find lasting success in the NFL. Dayne played eight years in the NFL with three different teams but rushed for more than 50 yards per game in only two seasons.

Ball is heading into his second season in the NFL, but after playing in all 16 games his first season, he saw action in just five contests a season ago.

But Gordon’s explosive style has many expecting a special NFL career after a pretty memorable college one.

The list includes Frank Kaminsky, who hopes to be a high draft in the upcoming NBA draft in just a few weeks.

Where do I buy an @Melvingordon25 Chargers jersey @nfl?

Havenstein Picked Up by Rams in Second Round

The St. Louis Rams traded down their original second-round draft slot (41st overall) to the Carolina Panthers for additional picks later in the draft, including No. 57 overall.

Havenstein had been projected as a third-round choice in early mock drafts, but had increased his stock after an impressive Senior Bowl.

During his time at Wisconsin, Havenstein tied the school record in career starts with 54. He was also a consensus all-Big Ten selection in 2014 and a was named a second-team All-American by USA Today.

The Rams made sure to shore up their offensive line, especially after they took Georgia running back Todd Gurley No. 10 overall in the first round.

After not hearing his name called during the seven rounds of the NFL Draft, Warren Herring’s dream of playing professionally continues, as he signed as a free agent with the Atlanta Falcons.

The Falcons finished 21st in run-defense last season, so Herring’s role on the defensive line as a gap-eater should serve Atlanta well.

This is the second year in a row the Falcons have signed an undrafted, free agent Badger, as they inked former Wisconsin tight end Jacob Pedersen shortly after the draft last year.