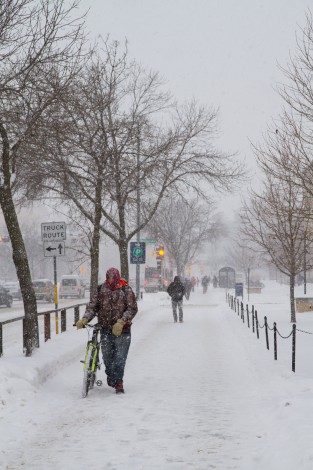 Winter in Madison came early this year. With snowfall in October, students and staff had to dig into winter clothing that was still confidently packed away. As a result, winter gear is already being worn around campus.

As puffy coats and jackets grow in numbers with each drop in degree, inequality is becoming more and more visible by the brands the University of Wisconsin community wears. As such, income inequality and discrimination become more visible during the winter months in Madison.

To be clear, this is not a new concept: student papers and larger publications have repeatedly written about how winter gear brands have negative social effects. One EdgeEffects article about UW quoted a handful of articles from The Badger Herald about winter coats and stereotyping.

It feels necessary to reopen this discussion with the new context of the Homecoming scandal. In the early 2000s, writers chose to focus on the divide between “coasties” and “sconnies” on our campus. Coasties is a term for Badgers from the east and west coast who are generalized as wearing Canada Goose coats and leggings. The Sconnie stereotype describes people from Wisconsin as consumers of cheaper brands and Wisconsin apparel.

The coasties-sconnies scuffle is extremely elementary and immature, and by continuing to publicize the terms, it only hands down stereotypes to every new class of UW students.

The heart of the issue isn’t east vs. west coast — it’s income inequality and lack of diversity. As the Homecoming scandal made clear, this school is not diverse. At UW, 76 percent of students are white, and the median household income is $71,185 per year — significantly higher than the U.S. media income of $61,937. Consequently, minority students and low-income students are easily marginalized and overlooked. While the university has engaged in a vigorous PR campaign to rebuild its public image, students are also to blame for the campus climate.

Through social media, social norms, and in all honesty, a general lack of attention and sensitivity, students collectively have not taken a stance against racism and income inequality at UW. While there are many individual organizations doing work to advocate for marginalized groups, the student body should be active in preventing stereotypes and cultural biases from growing.

Sconnies, Coasties unite!We have a very divided campus at the University of Wisconsin. I’m not referring to race, political views or sexual Read…

Winter coats are expensive, which makes them such an obvious symbol of wealth. Canada Goose and Moncler coats cost upwards of $750. Some high schools have noticed the unhealthy social consequences that these costly products can create. One high school referred to the issue as “poverty shaming,” and noted that students put economic pressure on their parents to buy them the most expensive products just to fit in.

Owning an expensive winter coat is not a crime. But not owning one should not come with social consequences. Come wintertime, high-end coat brands become symbols of affluence, and it is easy to feel insecure when a large portion of students seem to have one.

What should be done about this?

First, UW students need to get educated. We go through hours of drug/alcohol and sexual assault training, which is obviously crucial. But economic discrimination is just as prominent on such a homogeneous campus. That also needs to be hammered home.

Second, with education comes social change. Winter coat brands should not be relevant when discussing student identities. By dismantling stereotypes that revolve around clothing or where one comes from, we can dedicate more energy to building an inclusive campus culture.

So, if you’ve read this far, you are likely interested and frustrated about the campus and winter climate. In that case, be the change and hold yourself and peers accountable by not contributing to negative social norms. One by one, we can create the inclusive environment that should already be in place.