Gov. Tony Evers has received some criticism from both sides of the aisle regarding his most recent budget proposal. Republican lawmakers referred to his proposal as a “liberal wish list,” the Wisconsin State Journal reported. Despite this claim, Gov. Evers has made an effort to work across the aisle by reappointing 67 of the 82 appointees Scott Walker confirmed during his lame-duck session last December.

Despite the budget being dubbed a “liberal wish-list,” some of the key proposals Gov. Evers campaigned on were missing. Notably, the proposal lacked “substantial steps to reduce the state’s growing prison population and a full repeal of the 2011 law known as Act 10 that reduced the power of the public-sector labor unions.”

As with nearly every political issue in modern times, people are incredibly quick to form an opinion based on a headline. The mindset that reading the actual proposals takes too much time is commonplace.

During his campaign, Gov. Evers proposed eliminating Act 10 through a series of steps — not all at once. Consistent with that message, “His budget rolls back the private sector ‘right to work’ law Democrats have criticized as being anti-union and reinstates prevailing wage laws for private-sector workers on state projects.”

While that doesn’t specifically roll back the public employee provisions of Act 10, he has to start somewhere.

This is where some employee unions took issue. Paul Spink, president of the American Federation of State, County and Municipal Employees Council 32, said he found difficulty supporting a budget that “does nothing to address unfair compensation for state employees, and continues to embrace Walker-era policies which silence the collective voice of all public-sector workers.”

As far as other messages from Gov. Evers’ campaign trail are concerned, while there wasn’t anything that directly addressed reducing the prison population, there are steps Gov. Evers took that would inherently reduce this problem — most notably, decriminalizing marijuana.

Having a prison sentence on your record makes makes finding a job unfathomably more difficult upon release, so decriminalization of marijuana could expand many Wisconsinites’ job prospects. 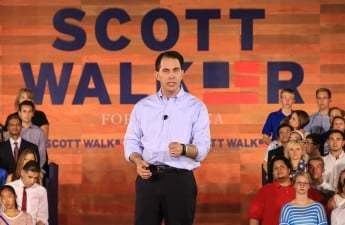 Stick with what you know: Walker finds another way to subvert our electoral democracyScott Walker recently joined a GOP redistricting group serving as the party’s data and legal epicenter in advance of the Read…

Additionally, the taxes from selling marijuana could prove quite beneficial for the state. Gov. Evers’ proposal also includes “reclassifying 17-year-olds as juveniles in criminal proceedings and providing more funding for drug treatment and job training.”

By themselves, these two policy proposals won’t sever the prison population in half, but again, it’s a start.

The Governor’s spokesperson, Melissa Balduff, noted that Gov. Evers is only two months into his four-year term, and he will have ample time to carry out his promises. I think she hit it exactly on the head — after all, Rome wasn’t built in a day.

Sitting behind a computer screen or feeling disheartened about a headline isn’t going to make policy magically come to fruition. Holding onto the idea that everything promised on the campaign trail will happen instantly once a candidate takes office will always leave citizens disappointed with the reality of the matter.

Gov. Evers is dealing with a Republican majority in the state Legislature, and all citizens must know that it is simply unrealistic to hope for everything to happen in one swift action. It would be nice. But, politically speaking, people need to understand and respect how complex our state government is and how laws are truly made.

All things considered, it appears Wisconsin’s 46th governor is getting his feet up under him. He has lofty ambitions, and given the great deal of political opposition Gov. Evers is facing, change will take time.

If our state democracy is to thrive and enrich the lives of all Wisconsinites, voters from both sides of the aisle would be best served giving the man a chance. If you are severely opposed to him, he has shown willingness to work across the aisle. Objectively speaking, we should all recognize that last December’s lame-duck session was abhorrent. Nonetheless, he re-appointed the majority of Walker’s selections.

On the flip side, if you support Gov. Evers and are disappointed with his first budget, recognize that he’s barely begun his tenure. A real “wish list” would be the idea that every single thing he advocated for during his campaign will come true with a simple wave of the wand. Politics is a constant debate of give and take, and of compromise between opposing viewpoints. Hopefully, the governor will have success working with members from both sides of the aisle to enrich the lives of all citizens.