The Wisconsin Department of Public Education released the scores of the FORWARD exam, which tests third through eighth graders in math, science, social studies and English. Less than half of students scored proficient or advanced in these categories. In both English and math, about 41 percent of students performed at a proficient or advanced level. In science, students scored slightly higher at 42.5 percent. The DPI also released the ACT scores of all juniors. The ACT scores were just as pitiful, with an average composite score of 19.7.

Wisconsin has been using the FORWARD exam for the past three years and trends can be tracked during that time period. No noticeable change has occurred. Though math proficiency increased by a percentage point from two years ago, English scores dropped and science scores remained steady. 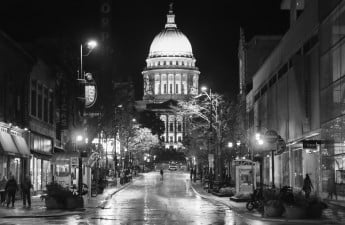 Along with standardized test scores, the DPI annually issues a school report card which measures schools based on student achievement, growth, closing gaps and graduation and post-secondary readiness. The most recent report card showed that out of 1,671 schools, 108 failed to meet expectations and 252 met few expectations. Most of these schools serve large populations of low-income or minority students. An updated report card is expected to be released Nov. 13.

The question then becomes: Why are our public schools failing? Who is at fault?

Democratic Gubernatorial Candidate Tony Evers has branded himself as the “best” candidate for Wisconsin’s students. He has been the state superintendent since 2009 and was the deputy superintendent beginning in 2001. This means Evers has been at the top of the Department of Public Instruction for more than 17 years.

It has been Tony Evers main job for those past 17 years to educate our students and to ensure that they are prepared for careers or college. Based on the above statistics he has failed our children. Evers, however, argued that the failures were “caused by external things.” He might be right, that targeting the issues causing children to struggle is difficult to do, and is outside of the hands of administrators. But that’s not to say he’s blameless, given that he promised his 2014 task force would fix the racial disparities seen in the achievement gap.

Gov. Scott Walker isn’t blameless either. He has rejected many of the DPI proposals for increased funding that Evers believes would help to minimize the achievement gap. But Walker has proposed an increase in K-12 school funding by $636 million, to a total of $11.5 billion, for his 2017-19 budget. Under that budget, the state’s share of funding would be 64.6 percent, the highest since 2009. Even Tony Evers praised Walker’s proposal, calling it “kid-friendly” and “an important step forward.”

But even the increased funding won’t help solve our schools’ problems. We can pump all the money in the world into our schools, pay teachers double what they earn now and provide new and improved programs and facilities, but the problem is in the classroom and it’s in our society. In Milwaukee, the truancy rate in 2014-15 was 46.2 percent — the state average was 9.5. Students can’t learn if they aren’t in school. If students find little value in school and are not encouraged to go to school, they suffer. These students are not encouraged to work hard while at school.

Furthermore, we cannot continue to let students who are not proficiently educated progress. The Isthmus recently reported on graduation rates and academic proficiency at the Madison Metro School District. While 72.6 percent of black students graduated, only 20 percent of black students were proficient in math and reading. Of greater concern, they found that the graduation rates for minority students are increasing while proficiency levels have stagnated. There’s only one way to explain that — graduation and class passing requirements have been eased to artificially increase graduation rates and to create the appearance of greater achievement and success in the classroom.

We need to focus on preparing our students to a proficient or advanced level, not simply getting them through the system. By letting students pass without proficiency, we fail to provide these students with a thorough education and fail to adequately prepare them for their future careers.